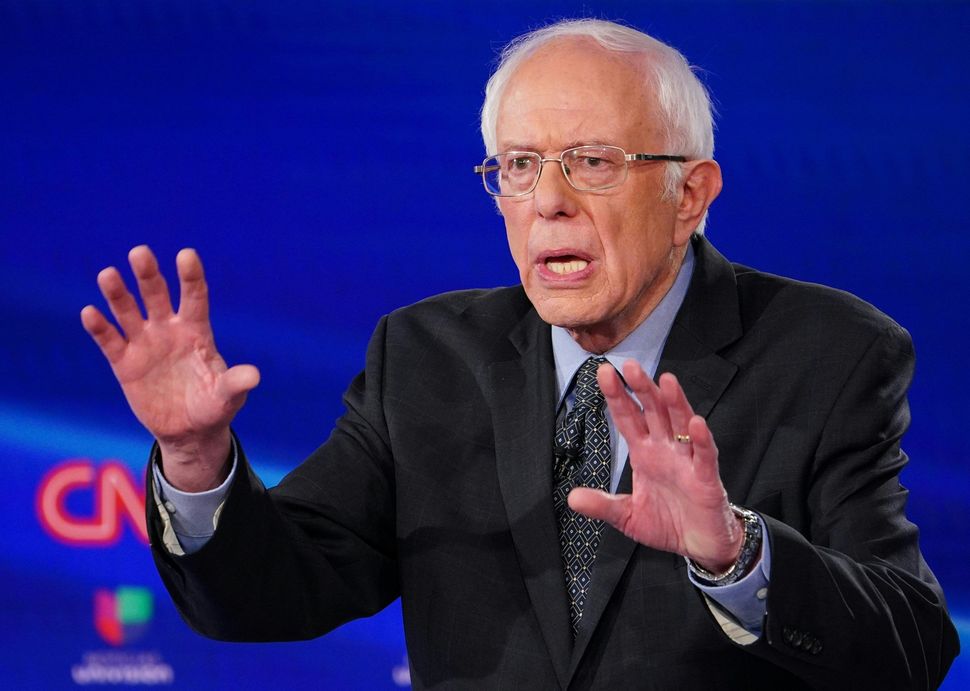 Bernie Sanders speaking during the last Democratic debate, with Joe Biden, on March 15, 2020. Image by Getty

Sen. Bernie Sanders, the Vermont independent who pushed progressive issues and outlasted nearly all his political opponents on the strength of tremendous small-amount fundraising, has dropped out of the presidential race, clearing the field for former Vice President Joe Biden to serve as the presumptive Democratic nominee.

Sanders’ campaign had a lively, and sometimes controversial, life on social media. So-called ‘Bernie bros’ on Twitter and beyond were accused of hyping up their favored candidate to the point of online bullying. Yet Sanders was also meme-ified by his supporters in more ways than one, such as in a fake gif where he spooks Donald Trump at a campaign rally, or an extremely popular spoof on one of his campaign videos.

Although Sanders underperformed among Jewish voters and donors, he had a strong core of support within the Jewish community – as well as people who supported other candidates but still took pride in his historic campaign. Here are some of the latest reactions on Twitter from Jews reacting to the most successful Jewish presidential campaign in American history.

Wow. I’m heartbroken about Bernie. In all this darkness, he made me believe that people, together, could be the light. He continues to be an inspiration. And he’ll never stop fighting for us.
Thank you, Bernie. For me, you’re right up there w Mr. Rogers.?♥️

My little boy loves Bernie. It’s hard to underestimate what it meant to him to see a Jewish person up there, or what he means to millions of underserved & underrepresented folks in this country. I snapped this pic in February because I wanted to remember the hope. pic.twitter.com/tvMRhyg3Cw

Thank you, Zayde. The rest is up to us. https://t.co/Y4LbIoahkm

Thank you for doing the right thing today, @SenSanders. I hope that you are able to take some time to enjoy Passover.

Me mourning the only shot we had at fixing this broken country on the first day of Passover by listening to a Simon & Garfunkel deep cut and sobbing pic.twitter.com/DqNXxmuDn2

In this essay, I will explore jewish suffering through Bernie Sanders campaign ending coinciding with the first night of Passover

America will not have a Jewish POTUS in the coming 4 years. But rest assured, come Jan. 2021, we WILL have a zaidy with Jewish grandkids in the White House. Am Yisrael Chai! ✡️

Dear Bernie supporters: I remember how devastated I felt when @ewarren dropped out of the race. I imagine you feel similarly today. I am sorry. Take the time you need to grieve.