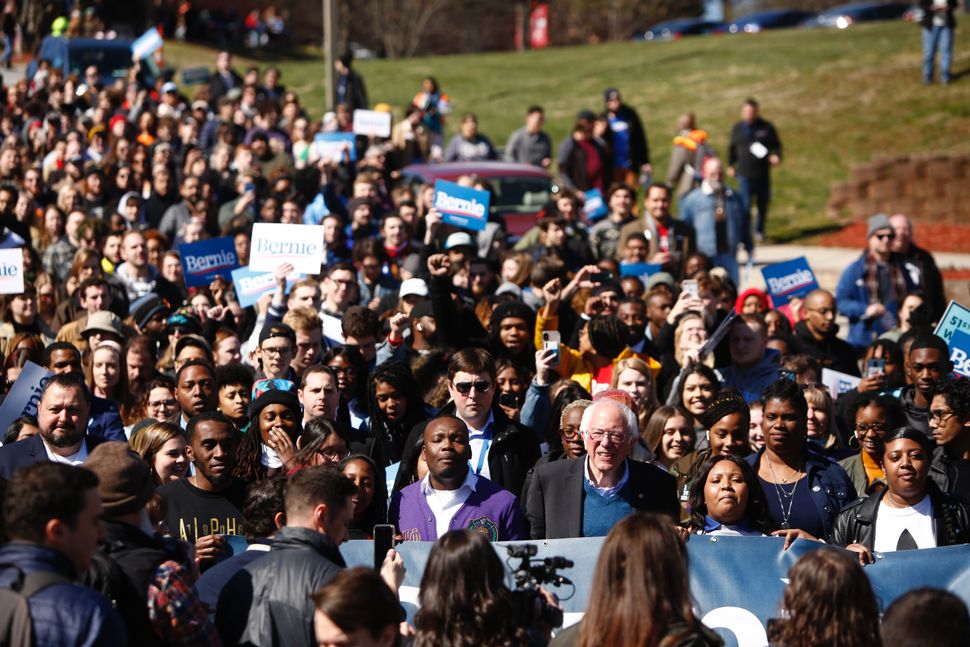 The political media has made a veritable meme out of a faction of overly enthusiastic Sanders supporters, some of whom engage in rude behavior online towards other candidates and their supporters.

While most supporters of Sanders do not fit this stereotype, you can find examples of individual Sanders supporters who do live up to this reputation — whether it be Twitter fans sending snake emojis to Massachusetts Senator Elizabeth Warren or jeering former South Bend Mayor Pete Buttigieg at an event in New Hampshire.

You are a sneaky disingenuous LIAR. He fought tooth and nail to get rid of super delegates. You KNOW that, you know better… but you just can’t help yourself. Snake! ? ??

A recent Politico article also reported on more uglier behavior in Nevada, where a group of Sanders supporters showed up outside the house of the Democratic Party chairman in the state. During the middle of the night, they screamed at him with a bullhorn, warning him against any election “shenanigans.”

Sanders, of course, bears no direct responsibility for his supporters who happen to be rude — online or offline. He is backed by millions of people nationwide and can’t possibly control all of their behavior.

And his movement does not have a monopoly on obnoxious behavior — as one survey from 2016 showed, many people actually thought Trump and Clinton backers were more rude online than Sanders ones.

There is, however, a case to be made that Sanders does have some responsibility to try and mobilize a movement that stresses ideals like civility and discipline, which some of his more enthusiastic activists don’t always have. After all, Sanders himself has said many times that he wants his voters to stay engaged past the election and form a grassroots movement that can be used to pressure Congress to adopt his agenda.

He can’t do that if his movement is disorganized and sometimes conspiratorial, as the protesters in Nevada were (the Sanders campaign condemned their behavior). Many Sanders skeptics are probably looking at the campaign as a recipe for chaos and instability in the future.

But what if we started looking at Sanders’ campaign as a solution to political instability rather than as a cause of it? What if Sanders is giving millions of people frustrated with our political system a constructive way to channel their energy — through the door-knocking, phone and text-banking, and other organizing activities it takes to elect a president — so that they largely avoid the more destructive behaviors the media has been highlighting?

The problem of people being disenchanted with our political system hardly started with Sanders. During the 2014 midterm elections, voter turnout dropped to the lowest level since World War II.

The most trusted institutions in our country are the military, Amazon, and Google — while our democratic bodies like Congress and our watchdogs are among the least trusted. It’s hardly a surprise that so many people turn to nihilistic internet posting, or worse.

What Sanders is offering is a way out of nihilism. He’s inviting people to get involved in a political movement where they can make a difference by participating in the political process.

When Buttigieg accused Sanders of having “nostalgia for the revolutionary politics of the 1960s,” he misunderstood where the Vermont senator stood politically.

Sanders was an organizer for the Congress of Racial Equality. As a civil rights activist, he helped desegregate student housing at the University of Chicago. Sanders was part of a broad-based peaceful movement for change in the 1960’s that helped make America a better place. He never even flirted with more extremist factions, like the Weather Underground, that tried to use terrorism to promote social change.

Historically, we know how extremist political movements end: when the people who are drawn to them feel like they can exercise their voice in the normal political process. In 2008, the RAND Corporation studied terrorist groups all over the world and found that 43% of them ended when they joined the political process, and that military force alone rarely ended up vanquishing terrorism.

Thankfully, in the United States, terrorism is rare, and mean tweets aren’t acts of violence.

But if Americans continue to lose hope in the political process, we could see an increase in political extremism. What Sanders is offering is a different message: if you’re losing hope in the process, get more involved, not less. Talk to your friends and neighbors, attend community meetings, go canvassing, and get involved.

In the 2006 voter suppression documentary, American Blackout, Sanders said,“Truth of the matter is that the media, large corporations, the people who control politically our country today do not want you to participate. That’s only bad for them. They want a low turnout of primarily upper middle-class people. They want big money to dominate the political process. Their nightmare is that young people, lower income people, the working people, jump into the political process. They do not want that.”

Sanders does want that. He wants a more vibrant democracy, where people participate, nonviolently and civilly, to rejuvenate the democratic process.