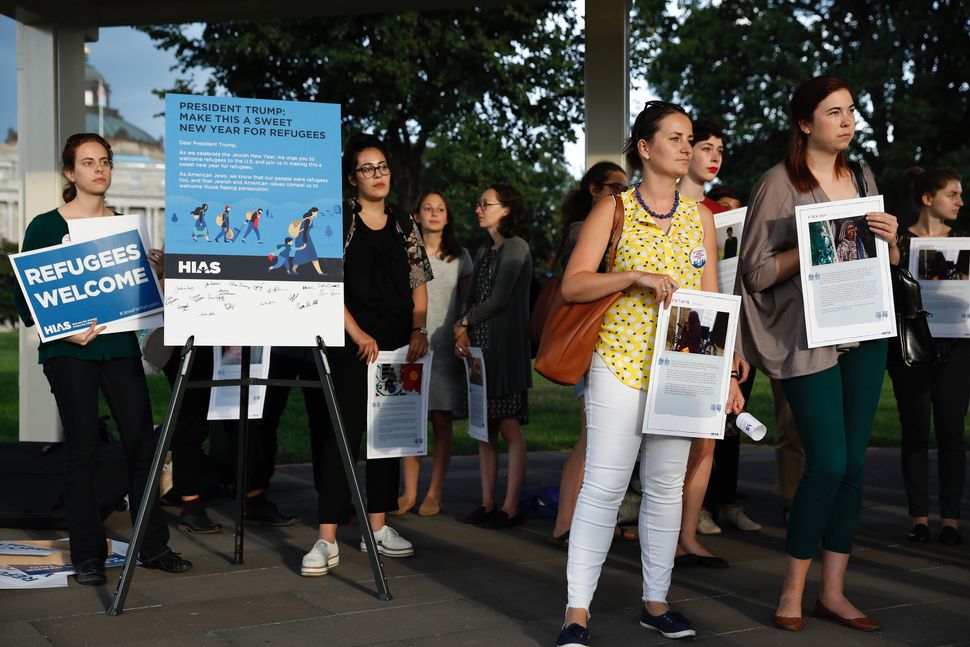 Activists hold signs during a demonstration organized by HIAS, founded as the Hebrew Immigrant Aid Society, outside the U.S. Capitol September 14, 2017 in Washington, DC. Protestors are calling on President Trump to increase the number of refugees resettled in the United States. (Photo by Aaron P. Bernstein/Getty Images) Image by Getty Images

Yesterday, the Conference of Presidents of Major Jewish Organizations, the umbrella group that purports to convene mainstream Jewish organizations, decided to delay the ascension of Dianne Lob as chair for one year. The ostensible reason was a complaint by the Zionist Organization of America which, among other things, alleged that Lob was “virtually unknown” and did not have “the requisite extensive network of relationships and experience with the complex dynamics affecting the Conference.”

While one wonders if this complaint was ever launched against any of the men who were previously nominated to her position, it was not the heart of ZOA’s objection. Instead, it was Lob’s work at HIAS that incensed the far-right group and its leader, Morton A. Klein.

This could have appeared in the manifesto of a synagogue shooter. Enough is enough. pic.twitter.com/xdxpAATfg3

Joined by pro-Trump figures outside the Jewish community, the ZOA has now successfully thrown a wrench into the career of an admirable Jewish communal professional.

The official written complaint by the ZOA is only one aspect of the campaign against Lob, and certainly the most presentable. It provides a litany of process-related grievances that appear reasonable to the untrained eye. But even there the true objection to Lob’s ascent comes out: “It appears that HIAS is not, by its own definition, either a Jewish organization or one whose primary purpose is to further the US-Israel relationship or the security and dignity of American Jews.”

HIAS, of course stands for Hebrew Immigrant Aid Society. A simple visit to HIAS’s website shows the ZOA’s claim here is baseless. Not only does the organization continue to identify as a Jewish one — the recent tendency of nonprofits to turn their acronyms into a brand notwithstanding — but their refugee resettlement partners are local Jewish social services organizations. Perhaps the ZOA and Klein don’t consider them Jewish organizations, either. But to any reasonable person, HIAS is an unambiguously Jewish group on account of their mission and activities.

However, focusing on the official statements of the ZOA would miss the political aspect and the tenor of this disgraceful episode. For that, Morton Klein’s Twitter activity is most instructive.

On April 23rd, Klein tweeted, “The overwhelming majority of refugees HIAS brings to America are non-Jews and mostly Muslims. That’s why they changed their name from the Hebrew Immigrant Aid Society to HIAS. The unvetted Syrian Muslims they bring here have gone to schools teaching hatred of Jews and Israel.”

No. The overwhelming majority of refugees HIAS brings to America are non Jews and mostly Muslims. That’s why they changed their name from Hebrew Immigrant Aid Society to HIAS. The unvetted Syrian Muslims they bring here have gone to schools teaching hatred of Jews and Israel. https://t.co/aa2LpzFutZ

There is no evidence to support any of this. As the journalist Ron Kampeas pointed out directly to Klein, HIAS does not “bring in” refugees at all; it resettles refugees welcomed by the United States.

What HIAS has done, and which has apparently irked Klein and his friends close to the Trump administration, is oppose discriminating against asylum seekers on the basis of religion. In 2017, HIAS launched a legal challenge against Trump’s infamous “Muslim ban.” They have also opposed other attempts by the administration, led by policy advisor Stephen Miller, to restrict resettlement of asylum seekers.

In other words, the campaign against Lob and HIAS is in principle a pro-Trump one. That her opponents have chosen to falsely claim that HIAS is not a Jewish organization reflects their desire to disassociate progressivism — including supporting refugees who are treated with suspicion by the broader society, as we once were — from the interests of the Jewish community.

It is a minority position, but a strongly-held one. As Joel Swanson, a contributing columnist to the Forward, tweeted, “Jewish Republicans are a 20-25% minority who think they deserve to be treated like a 75% majority.” By arbitrarily delaying Lob’s term in deference to the ZOA’s complaint, the Conference of Presidents formally recognized this outsized influence of the right.

The Conference of Presidents of Major American Jewish Organizations caved to pressure from Mort Klein’s ZOA, so the former chair of HIAS will not lead the Conference at this time.

Jewish Republicans are 20-25% of the community, & get treated like a majority by our institutions. https://t.co/nHcJwdhf46

Lob signed the statement agreeing to delay her nomination and likely sees a way to work within such a system. It is a respectable choice and I wish her success.

But the professional humiliation to which she is being subjected will no doubt be noticed by younger progressive Jews.

The message the Conference has sent is that their pro-refugee advocacy is “controversial” and could potentially harm their careers at the highest levels of the Jewish community. Many will choose to pursue careers elsewhere.

If the future involves compromising our progressive Jewish values to placate the Stephen Millers of the community, that’s probably the right choice.

Correction: An earlier version of this piece incorrectly stated that the vote for Ms. Lob had been delayed. We regret the error.