Every Jew must decide which side they’re on 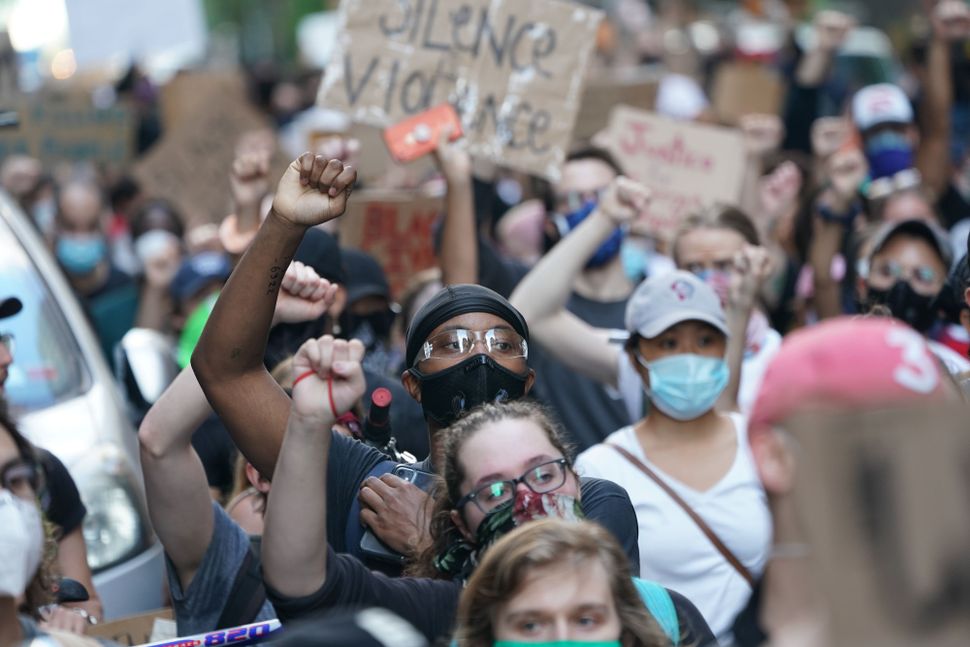 Protesters demonstrate in traffic on Fifth Avenue over the death of George Floyd by a Minneapolis police officer at a rally on May 31, 2020 in New York. – Thousands of National Guard troops patrolled major US cities after five consecutive nights of protests over racism and police brutality that boiled over into arson and looting, sending shock waves through the country. The death Monday of an unarmed black man, George Floyd, at the hands of police in Minneapolis ignited this latest wave of outrage in the US over law enforcement’s repeated use of lethal force against African Americans — this one like others before captured on cellphone video. (Photo by Bryan R. Smith / AFP) (Photo by BRYAN R. SMITH/AFP via Getty Images) Image by Getty Images

On the first day, a white woman made a panicked call to 911, because a black man bird-watching nearby in Central Park politely asked her to leash her dog.

On the second day, George Floyd, a 46-year-old black man, was arrested and lynched by Derek Chauvin, a white police officer, who pressed his knee into Floyd’s neck for more than five minutes in response to a complaint that Floyd attempted to use a counterfeit bill at a convenience store. A brave teenager, Darnell Frazier, laid bare the truth of what happened by recording it on video.

On the third, fourth, and fifth days, a shocked nation watched and rewatched the video, while the District Attorney failed to press charges against any of the officers who were involved in the arrest and killing of Floyd.

On the sixth day, on Shavuot, while we were celebrating the revelation of biblical law at Mt. Sinai, the groundswell of anger exploded into protests against the lawlessness of law enforcement throughout the nation. Floyd’s murder became the galvanizing evidence of the systemic racism that has plagued our nation for 400 years. Like a virus, this racism has proven itself to be highly adaptable, but it has always had abuse of power and violence at its core.

On the seventh day, while some of us rested, others joined the protests throughout the nation, which were met in some cases by the ruthless arm of the law. In New York City, the NYPD drove their vehicles through people, shoved a protestor to the ground, sending her to the ER, and unmasked a black man in the middle of a pandemic to pepper spray him in the face.

I am heartbroken and disgusted to see one of my family members a young black man w/his hands up peacefully protesting and an NYPD officer pulls down his mask and pepper sprays him. @NYCSpeakerCoJo @BPEricAdams @FarahNLouis @JumaaneWilliams @NewYorkStateAG @NYPDShea cc: @EOsyd pic.twitter.com/tGK5XWS0bt

Today, as we re-enter the world as it is, every Jew — white Jews in particular — in New York City and throughout our nation must ask ourselves: Which side are we on?

We find ourselves in a moment of national reckoning perhaps unmatched in any of our lifetimes. The enduring injustice of racism has found succor with a viral pandemic that has had a disproportionate impact on communities of color. A lack of leadership from our city and nation’s elected leaders has strengthened the mix. It is the public health crisis of 1918 with the racial violence of 1968 and a Lindbergh-style fascistic leader like the one Roth imagined in “The Plot Against America,” at the helm.

As Jews, our hearts and souls ache with the disconnect between our values and this moment. In America, our society has too often failed to treat every individual as if they were formed b’tzelem elohim, equally in the divine image.

Our leaders have not only failed to pursue justice, they have also perpetuated injustice. Our president threatens us with “the most vicious dogs, and the most ominous weapons,” harkening back to images imprinted on our national consciousness by the attacks on the civil rights movement. In New York City, our mayor commended the “tremendous restraint” of the NYPD on the same night officers brutalized protesters with impunity. (Mayor De Blasio later called for an investigation into specific instances of police brutality.)

The events of the past week have again made clear another revelation: As individuals and as a Jewish community, we must recognize that the promise of “equal justice under the law” remains out of reach in a system infected with structural racism.

We must show our black and brown siblings that we see the racism and violence coursing through our society, and we must be prepared to take responsibility not only for our transgressions, but also for our silence.

It starts at home. As a Jewish community, our best institutions have undertaken anti-racist work both within and beyond the synagogue walls. But the process has only just begun, and making our voices heard against racism and police brutality in this moment is a requisite step in that march towards justice.

If we want to stand on the side of civil rights, we must respond to attacks on people of color as we would a white student facing anti-semitism on campus, or a Hasidic man beaten on the streets of Brooklyn: We must see their pain and commit to disrupting the forces that cause it. And while we show empathy and resolve, responsibilities that will last our entire lives, there are immediate actions in our government and public policy we can take.

Section 50-a of New York State’s Civil Rights Law, perpetuates police unaccountability by shielding misconduct records from the public view. As part of the progressive gains made in New York State in the last year, a repeal of 50-a was attempted but failed. Today, with support from Gov. Andrew Cuomo, is the time to once and for all to ensure police misconduct is not concealed from accountability.

Today marks the start of a new week, following a difficult week that was preceded by many difficult weeks before it. Today, we can choose to renew our commitment to the ongoing fight for justice. We can stamp out the dual viruses of COVID-19 and structural racism. Much has been revealed, creating an opportunity to address deep structural wrongs, but we all must ask ourselves in the weeks ahead which side are we on and what will we do about it.

Every Jew must decide which side they’re on