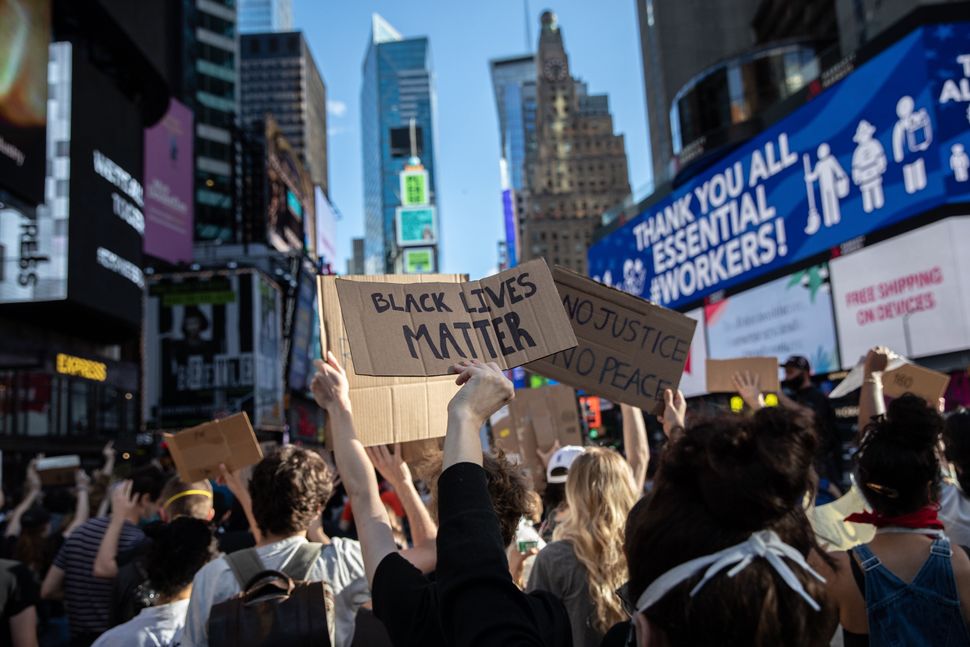 NEW YORK, NEW YORK – MAY 31: Black Lives Matter protesters kneel in Times Square while marching to honor George Floyd in Midtown Manhattan on May 31, 2020 in New York City. Protesters demonstrated for the fourth straight night after video emerged of a Minneapolis police officer, Derek Chauvin, pinning George Floyd’s neck to the ground. Floyd was later pronounced dead while in police custody after being transported to Hennepin County Medical Center. The four officers involved have been fired and Chauvin has been arrested and charged with 3rd degree murder. (Photo by John Moore/Getty Images) Image by Getty Images

Are you feeling sick?

For months that’s been the question we have asked each other as COVID-19 raged and killed over 100,000 Americans. My Jewish family, which is mixed-race with two black members, has been grateful to answer that we are okay. Grateful to be healthy and employed.

But after the events of this past week, we feel sick to our stomachs.

When the smoke clears, it’s up to all of us to decide if this country will change. Have we had enough of black deaths or will there be a century more? This country has deep, entrenched racism, stemming from slavery. What will you do to address it? What will the Jewish community do? Neutrality is not an option for us as Americans and as Jews. Action is required.

Only you can determine the lessons you will take from this bloody, fiery, painful week. So many black people are trying to teach you.

We have a deeply racist president, one who has courted this type of violence for years from the birther movement to his “shithole countries” comment to quoting George Wallace during an uprising against police brutality and systemic racism.

Forty cities are under curfew. Nearly half of the nation’s governors have called in the National Guard for assistance. Journalists have been pepper-sprayed, shot at with rubber bullets and arrested by police.

While there have been bright spots, moments where police marched alongside protestors or took a knee with them, overall the police response has been dismal. We have seen a wanton display of police violence, driving police cars through a crowd in New York City, shooting paint canisters at people on their front porches in Minneapolis, hitting an old man walking with a cane in Seattle.

Too many officers, instead of protecting and serving, have taken this as a moment to indulge their anger and frustration, as if the fact that four officers being held accountable enraged other officers into demonstrating that they were accountable to no one.

Police brutality isn’t new. Racist state violence isn’t new. Racist Presidents aren’t new. American racism is over 400 years old. It’s baked into our culture, our systems, our very selves. We still are figuring out how to fight it.

I need you to fight it with me. It’s not enough to quote Abraham Joshua Heschel marching with Dr. Martin Luther King Jr. in the sixties. Heschel took risks. Raise your voice. Push back. Take risks to push everyone to be better.

If you are white presenting, own your white privilege. Even if as a Jew you check “other” on the census, you still present as white when pulled over by a cop. That doesn’t mean you don’t face anti-Semitism, but it does mean you benefit from systemic white supremacy. You have an obligation to work to tear down that oppression.

Demand better. Loudly. It can be polite if you need it to be, but it must be insistent. Some may be uncomfortable with the points you raise, but others in the room will be relieved. In every situation, push yourself to dismantle racism. Raise it at work. Raise it at synagogue, raise it with your friends and family. Take every opportunity to dismantle oppression.

Speaking on a panel? Demand people of color be invited. Working at a school? Try to influence the curriculum to grapple with our history of anti-blackness. Do you have disposable income? Give. Do you have Kids? Talk to them about racism. Worried they are too young? Read them books with black kids, especially books with Jews of color. Work for a Jewish organization? Insist that black Jewish voices be heard. Insist on hiring them. Pay for anti-racism training for your staff. Set a high bar for inclusion, one that feels difficult to attain, and strive for it.

Did you hear something that made you feel sick? That racist comment you know is wrong? Don’t swallow your nausea; speak out against this sickness, this cruelty. You can speak with love if you want to, but don’t be quiet. We must also refuse to allow our love of Israel to be weaponized as an excuse to abandon racial justice. There are so many great organizations fighting for racial justice in America. It is a ridiculous fallacy that you must choose between your support for Israel and the fight for racial justice. Don’t buy into that lie and don’t allow that lie to be spoken without rebuttal in your presence.

American Jews: Please nurture your nausea, your discomfort, your anger. Raise your voice, open your wallet, vote for change, volunteer and advocate for racial justice. After a few years, it starts to feel good. Like healing. Like empowerment. Like fighting back.

When the smoke clears, we can decide not to stomach this sickness of racism anymore. Jewish tradition demands this of us.