Editorial | What James Bennet taught me about terrorism – and courage 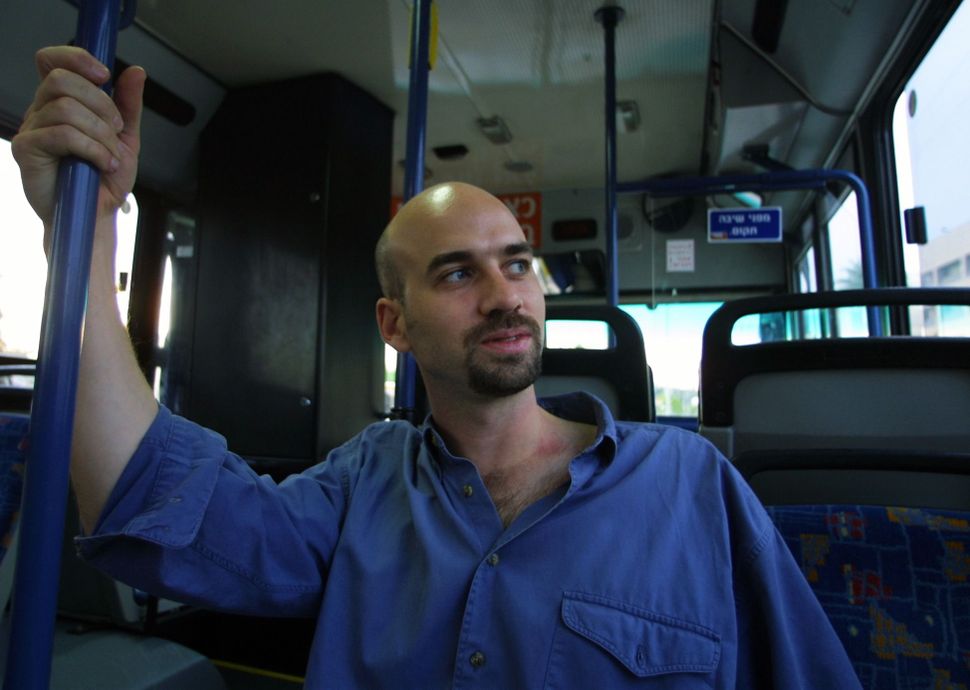 During the height of the bus bombings of the Second Intifada, James Bennet, then Jerusalem bureau chief of The New York Times, and photographer Rina Castelnuovo, spent three days riding buses across Israel. Image by Rina Castelnuovo

The problem, James Bennet wrote in the opening lines of an internal New York Times memo, “was always where to stop, rather than where to start.” When “you draw a line” and say something “does not qualify,” he cautioned, “you commit what looks to the world like a political act, and may in fact be one.”

This was 15 years ago, and Bennet was talking about whether, when and how to use the term “terrorism” in news coverage of the Israeli-Palestinian conflict. I’ve been thinking a lot about this memo since Bennet — one of my predecessors as Jerusalem bureau chief of The Times — resigned last Sunday as Opinion editor of The Times. 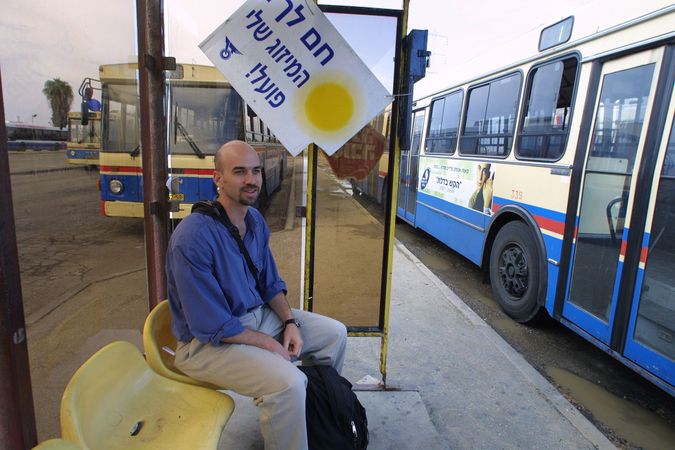 The Twitter campaign that cost Bennet his job claimed that the publication of an OpEd calling for military troops to quell the looting and violence that disrupted early days of the George Floyd protest endangered the lives of black journalists covering the protests. I don’t know how many of the people who re-Tweeted that mantra have actually covered violent protests. I do know that Bennet himself risked his life repeatedly doing so covering the Second Intifada.

The uprising, which killed some 1,000 Israeli Jews and 3,000 Palestinians between 2000 and 2004, was among the most complicated and challenging stories for journalists to cover. Beyond the daily calculations of personal risk and emotional toll of chronicling so much devastation and destruction, there is the ever-present danger of false moral equivalency, with every word you write being picked apart publicly by passionate advocates.

One issue that persisted through my tenure and into today is over the term terrorism. Most experts (and lay people) define terrorism as “the deliberate use of deadly violence against civilians for political purposes,” as Bennet wrote in his memo. But the term, like so many in what I call “conflict code”, has taken on a particular toxicity in the Middle East context.

This is an asymmetrical conflict in which one side has a powerful military and the other a range of political and militant groups where the line between civilian and combatant is often blurred. When Israeli soldiers are killed, for example, many Israeli (and most diaspora) Jews call this terror, while many Palestinians view it as their only option to fight the occupation.

Will Israel really annex the West Bank (and what happens next)? Join Jodi Rudoren, editor-in-chief of The Forward, on June 17 at 11 a.m. EDT for a conversation with David Makovsky of the Washington Institute for Near East Policy and Khalil Shikaki of the Palestinian Center for Policy and Survey Research.

“It’s very tempting not to use the word at all,” Bennet wrote in his January, 2005, memo to the foreign editor at the time, Susan Chira, after he finished his tour in Jerusalem. “My theory was that if I got to the scene of an attack and described it in the most vivid detail possible, I’d be doing readers the kind of service we aspire to provide, not guiding judgments with labels but letting readers choose their own labels based on the facts.”

Bennet raced to the scene of so many attacks during those awful years of death and destruction: Much of what many of us know about the intifada, we learned under his brilliant byline. He reported daily, deeply, from the streets where the bus bombings and military backlash destroyed innocent lives, and from inside the power chambers that guided them. Wrenching human narratives along with sharp political insight. Bennet was the most empathetic of eyewitnesses, and a master at weaving context and analysis through each dispatch.

“Not to use the term began to seem to me like a political act in itself,” he wrote in the memo, which referenced admiringly by The Times’ public editor back in 2005, Daniel Okrent, and again three years later by his successor, Clark Hoyt. “It felt so morally neutral as to be a little sickening.”

I’m quoting extensively here because I find the memo so compelling, so insightful, so smart — and so relevant to the debates unfolding today around the protests, the publication of the OpEd, political journalism in general.

“I also came to think that while we erode our credibility as truth-tellers by making political judgments in our copy, we can also put that credibility at risk by ducking any moral judgment,” Bennet said.

“It seemed to me that some perceived political taint in the language was inevitable,” he continued. “The goal was to minimize it, using the term when it had broad factual and moral basis and when NOT using it made a sharper, stronger political statement than using it.”

I remember so clearly thinking this exact thing when, in November 2014, two Palestinians with guns and axes burst into a synagogue in the Har Nof neighborhood of Jerusalem and killed five Orthodox men at prayer. Terrorism, surely, and I wrote that in the article — the headline writer, though, called it an “assault.” We heard complaints from all sides.

What I admire most about Bennet’s memo — and what is most relevant to today’s turmoil over the boundaries of our journalism — is its humility. The OpEd that cost Bennet his job had flaws, but the principle of publishing provocative opinion must survive him. Because the real danger is the danger to our discourse — indeed our democracy — of drawing lines is, as he put it, “always where to stop, rather than where to start.”

Now The Times, where I worked for 21 years before joining the Forward in September and will always feel part of, is undergoing a review of the entire OpEd process and departmental mission. I hope part of the inquiry includes a re-read of Bennet’s terrorism memo, especially the last two paragraphs.

“I may be chickening out here, but I’m not sure it’s a bad thing that we don’t have an engraved standard,” he wrote. “I came to think that some ambiguity on the question was constructive. Having a clear rule might create a straitjacket for us, or a phony standard by which readers will judge us.”

Whenever he was asked by readers or groups about the use of the term terrorism, Bennet went on, “I would begin by saying there really wasn’t a policy, then tell them that I knew my answer on when to use the term would not satisfy them completely — and that, by the way, it also didn’t satisfy me completely.

“And then I would launch into a version of what I’ve written above,” he said. “In other words, not having a policy served as a gateway to a discussion of the nuances.”

What the world needs most from The Times — and the Forward — right now, what the world has always needed from journalists, is “a discussion of the nuances.” There’s not really a policy, and we’ll never satisfy anyone, even ourselves, completely. We’ll do everything we can to maintain our credibility as truth-tellers without ducking any moral judgment.

I’m going to keep Bennet’s memo by my desk to help me navigate the way.

Editorial | What James Bennet taught me about terrorism – and courage