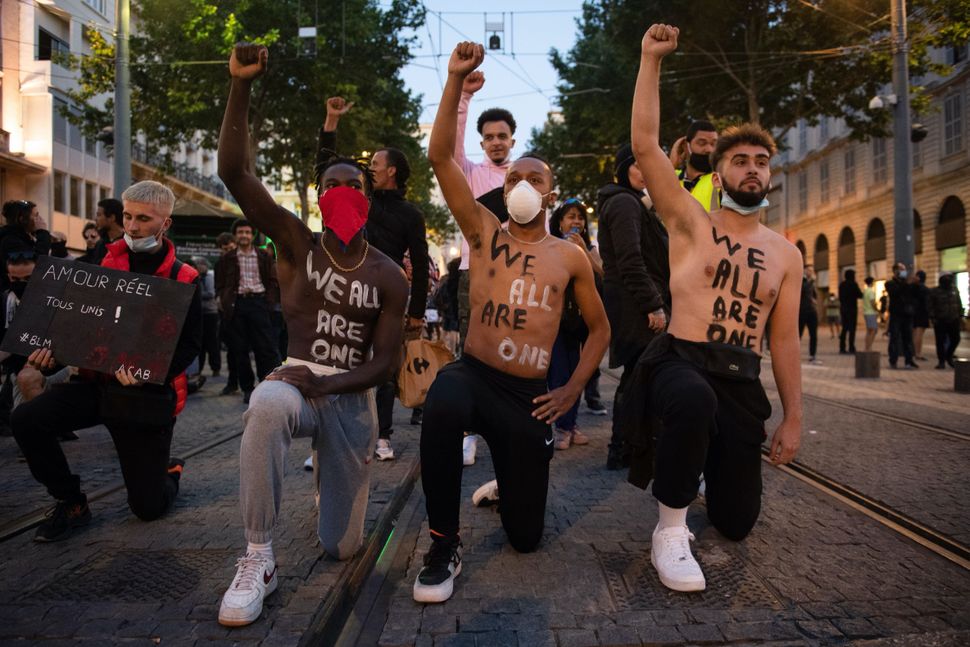 Protesters with inscriptions painted on their chest reading “We All Are One” kneel as they raise their fists during a rally as part of the “Black Lives Matter” worldwide protests against racism and police brutality, at the Vieux-Port in Marseille on June 13, 2020. – A wave of global protests in the wake of US George Floyd’s fatal arrest magnified attention on the 2016 death in French police custody of Adama Traore, a 24-year-old black man, and renewed controversy over claims of racism and brutality within the force. (Photo by CLEMENT MAHOUDEAU / AFP) (Photo by CLEMENT MAHOUDEAU/AFP via Getty Images) Image by Getty Images

No sooner had protesters poured into the streets following the killing of George Floyd by a Minneapolis police officer than commentators started offering interpretations. One provocative thesis: The Black Lives Matter movement has become a new religion. It was not meant as praise.

One writer cringes at the “surrender-worship posture” of one Bethesda, Maryland demonstration and the “flat, robotic tones” in which the crowd makes a kind of confessional commitment to anti-racism. “Identity politics,” Alexandra DeSanctis proposed at the National Review, has become a religion, a “creed for the godless” offering truth and meaning and “excommunicating” its own heretics.

So is there any truth to this notion? Has BLM become not simply a protest movement against police violence toward African Americans but a religious movement of its own?

There’s no perfect scholarly consensus on the definition of religion. But many of the aspects isolated by hostile commentators as “religious” are quite ordinary. People chant in unison at political rallies and football games; people look for ways to make meaning in their lives through dietary choices or political affiliations; people work to win converts and enforce agreement in just about everything.

That all of these things are common among world religions just goes to show that “religion” is, whatever else, a very human field of endeavor. Calling the protests “religious” can be a way for an atheist critic to mock their form or their content — look at these rubes, with their conformity and mystical community rites! — or it can be a way for a devout critic to contrast the inadequate new religion with the real thing. In this account, the protesters’ “taking a knee” in remembrance of the death of George Floyd is a misdirected version of the impulse to kneel before the Body of Christ. “[T]here is but one remedy for the idolatry of bad religion,” C. C. Pecknold explains in “First Things:” “kneeling before God and walking with him” in a Corpus Christi procession of the Catholic Church.

All the same, as the pastor of a Lutheran church and a participant in the recent protests, I can’t deny that there is a religious quality to these events.

Start with the phrase itself: “Black Lives Matter” has become a confession as much as a moral or political claim. The act of saying it transcends the meaning of the words themselves. It’s not exactly the Deuteronomic instruction to make the offering with the words “My father was a wandering Aramean,” or Paul’s continual return to the phrase “Jesus is Lord.” But a willingness to say it — publicly and without hedging — has come to represent something, at least in part because the phrase itself was highly controversial after the Ferguson protests that helped popularize it.

The victims of police violence are named in something like a litany of martyrs, with the phrase “say his/her name” underlining in words and actions, and the desperate insistence that they not be forgotten by the news cycle or buried in a hidden police report. And the kneeling or lying prostrate featured in many protests, often for the period of time George Floyd was pinned and dying under the officer’s knee, is a powerful experience of the mimesis we practice in religious rituals of all kinds. It makes us, to borrow Kierkegaard’s phrase, contemporary with the events we commemorate.

Some of us strip an altar and process with a cross during Holy Week. Some of us ask “Why is this night not like other nights?” I would not go as far as one seminary professor who attended a demonstration and concluded, “this is true Eucharist, the kind that remembers crucifixion and threatens empires.” But if you are going to measure the psychological and emotional experience of your average worship service against marching and singing with a big, diverse “church” in the streets, it’s probably going to come up short.

I wonder if part of the resentment and even fear these commentators have expressed toward the “religious” echoes of the protests may spring from that disappointing contrast: The protests are a sign for the atheist that a fully “secular,” post-religious age may never come — that chants and slogans, transcendent aims, ecstatic community, and moralized arguments may be with us forever.

And they are a sign for the believer that our brand-name religions have failed to speak adequately to the world around us. Whether we hasten to throw up our defenses or to catch up to the march, we always seem to be reacting. No one in these movements is looking to any of us to legitimate them, lead them, or give them meaning.

When I showed up to the local protests I came in my black clergy shirt and carried a sign with a verse from Leviticus, quoted by Jesus: “Love your neighbor as yourself.” Once upon a time those clothes and those words would have signaled a kind of approval and authority I can no longer give. Now I’m just an eccentric, bringing my own peculiar threads to a tapestry I do not design.

And that, I understood immediately, was just fine. No one around me seemed to be looking for a church anyway.