De Blasio just lost the Orthodox. It was a long time coming. 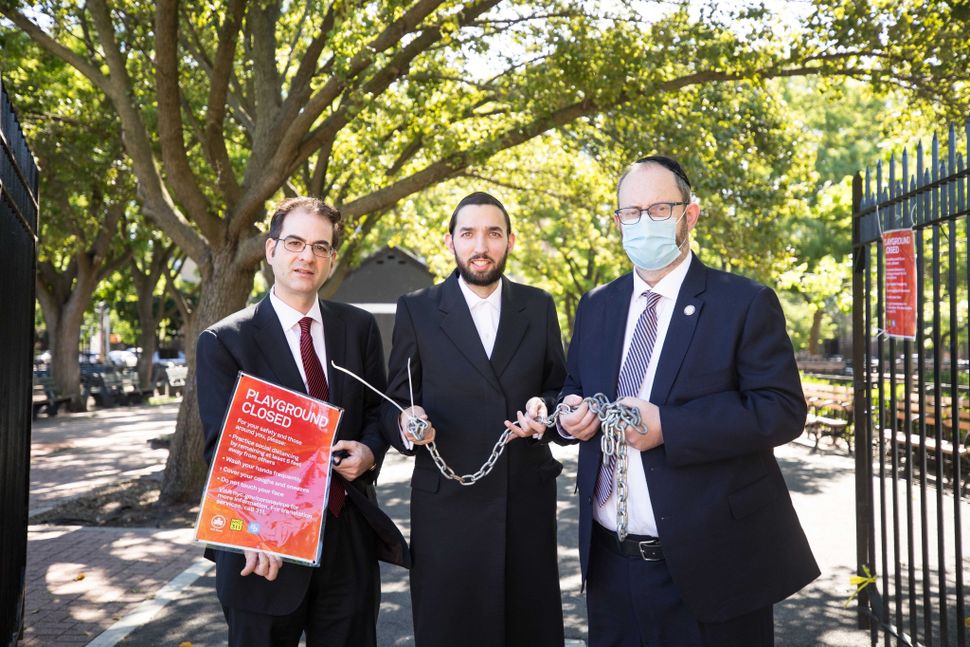 A very public clash is developing right now between the Haredi community in Brooklyn and Mayor Bill de Blasio. Over the last few days, the Parks Department welded shut the gates of public parks, mainly in neighborhoods populated by Orthodox Jews. Meanwhile, parks in non-Jewish areas have been allowed to remain open, with no police or welders.

To outside observers, this may look like the breakdown of the famously close ties between the mayor and the Orthodox community. But to those of us living in these communities, the scuffles are the latest in a string of incidents that expose the true nature of the relationship, which has never been as simple and as warmhearted as it has been portrayed.

The park closures and break-ins escalated a conflict between the two sides that has been brewing since the coronavirus pandemic hit New York City, set off by the city’s unequal enforcement of social distancing guidelines. Last week, for example, the New York Police Department was largely absent as stores across the city were being burned and looted during protests. Yet they somehow had plenty of units available to chase Jewish mothers out of the city’s parks with their kids in tow. It was a stunning double standard, doubly insulting after de Blasio allowed and even participated in the massive protests. Thousands and thousands of New Yorkers marching in the streets was fine for de Blasio, but a few dozen Hassidic mothers in a park was too much to bear.

It was only the latest such double standard. Early in the pandemic, after officers from the New York Police Department dispersed 60 children studying in a yeshiva in Williamsburg, de Blasio took his displeasure with the Jewish community public. “Earlier today the NYPD shut down a Yeshiva conducting classes with as many as 70 children,” the mayor tweeted. “I can’t stress how dangerous this is for our young people. We’re issuing a Cease and Desist Order and will make sure we keep our communities and our kids safe.”

Earlier today the NYPD shut down a Yeshiva conducting classes with as many as 70 children. I can’t stress how dangerous this is for our young people. We’re issuing a Cease and Desist Order and will make sure we keep our communities and our kids safe.

It was the second time de Blasio had singled out the Jewish community within a few weeks, the first being his infamous tweet addressed to “the Jewish community” after a funeral in late April, messaging which has given fodder to anti-Semites and drawn a target on the backs of Jews.

The mayor defended his comments by insisting that “It was said with love, but it was tough love,” and some members of the Hassidic community defended him; bulletins went out from both Satmar rebbes shortly after the first tweet, and many viewed the letters as highlighting the close ties between the Orthodox and de Blasio. But I saw an example of how Orthodox communities are driven to support the mayor out of fear, not goodwill.

All of last year, the mayor failed to do anything about the daily anti-Semitic attacks that occurred across the city — and this not for lack of being asked. “We were calling on the city to do more and to give us additional resources when Jews were being beaten,” State Assemblymember Simcha Eichenstein told Gothamist. “We were begging for more help.” One would think that if Orthodox Jews had a close alliance with the city’s leader, the community would have been able to procure the extra police patrols for which they had begged to protect themselves from daily assaults.

Only when Jews were murdered in New Jersey and upstate and there was a national spotlight on the issue did de Blasio acquiesce and temporarily increase patrols. And after the media attention went away, so did the extra police patrols, though of course now they are back — to break up Hassidic funerals.

The disgusting double standard the mayor is deploying in enforcing social distancing may look like a sudden abandonment of the Orthodox community. But the truth is, it’s just the straw that broke the camel’s back, revealing to us how little we mean as constituents.

De Blasio just lost the Orthodox. It was a long time coming.