Hasidic leaders are on a chain-cutting campaign to liberate playgrounds 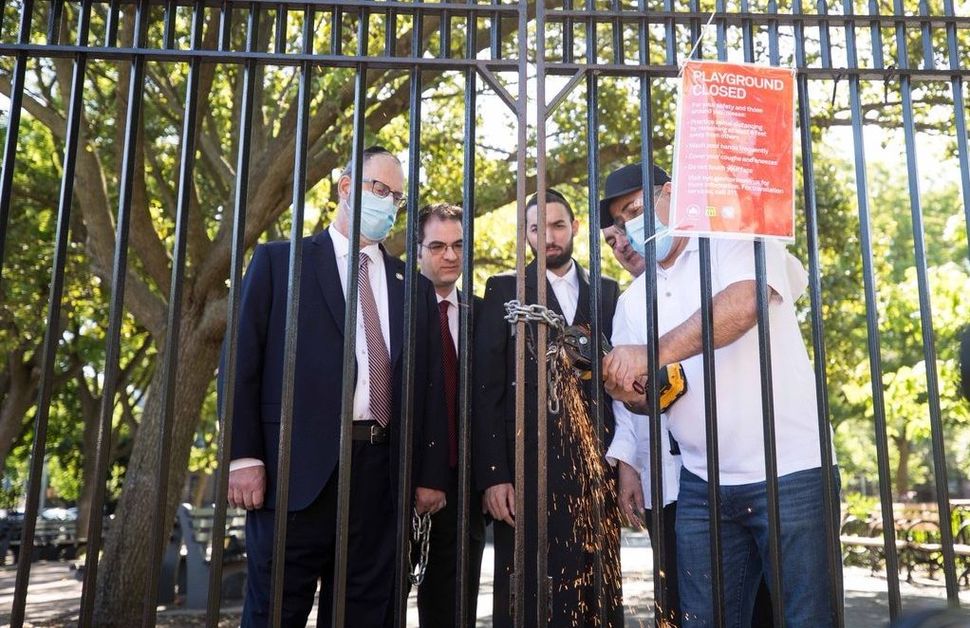 Heshy Tischler is on a mission to open Brooklyn playgrounds closed due to the coronavirus, and the people are on his side. That’s why they keep giving him bolt cutters.

He says he’s helped reopen six playgrounds in Brooklyn since last Thursday — the most recent in Crown Heights on Tuesday evening. Three of those had to be re-reopened after city personnel closed them again, but he did it. Last week he had just one pair of bolt cutters. Now he has seven, bequeathed by local fans — even though some of the chains around playground gates require electric metal cutting tools to break. And he’s receiving requests to come remove chains from playgrounds in Queens, as well.

“They wanted me to hold it like a symbol, like I’m Batman or something,” he said. “Whatever makes them happy.”

A video of Tischler, a Hasidic radio host, community activist and aspiring politician breaking the chains around a Williamsburg playground gate kicked off his bolt cutter campaign on Monday.

Three Brooklyn politicians channeling their Hasidic constituents’ frustrations over the continuing playground closures have joined him, in a sharp escalation of the community’s feud with New York City Mayor Bill de Blasio.

The bolt cutter crew are not breaking the law, they insist. City parks, which include playgrounds, are technically open, so it is not “breaking in” to cut the locks, Tischler says in one video.

De Blasio responded to the chain-cutting incidents in his Tuesday morning press conference, saying that he’s sympathetic to parents but that opening the playgrounds prematurely could delay the overall reopening of the city by spreading coronavirus.

“We’re not gonna allow people to take the law into their own hands,” he said. “It just doesn’t work. So people are not allowed to open up a playground that’s not yet available to the public.”

“We’re not going to allow people to take the law into their own hands.”@BilldeBlasio says playgrounds will stay closed until Stage 2 of reopening. Despite his participation in mass protests, @NYCMayor thinks playgrounds are the threat to public health. pic.twitter.com/N8mglb6rTy

The campaign comes after several demonstrations of Hasidic children have called on de Blasio to open the playgrounds and on New York Governor Andrew Cuomo to reverse the state Department of Health’s ban on sleep-away camps this summer.

“Someone should explain to me why we can have thousands of people on our beaches, thousands of people out in the streets protesting, and we can’t have kids in our local playgrounds,” said Simcha Eichenstein, a state assemblyman representing Borough Park and parts of Midwood. “Makes no sense.”

Hasidic families feel disproportionately affected by the ongoing closures of public facilities like playgrounds because they have large families, often with two parents who work, and most live in large apartment buildings with little access to private outdoor space.

Esther Weiss, a Hasidic Williamsburg resident, said that it is a struggle to keep her four children that still live with her — aged six, nine, 14 and 18 — entertained. She voted for de Blasio in his previous mayoral races, and says that she and her community feel “let down” by his overt support for the protests over their community’s unique need for public space.

On Monday and again on Tuesday, Tischler, Eichenstein, State Senator Simcha Felder and City Councilman Kalman Yeger went to parks around Hasidic neighborhoods in Brooklyn to break chains and usher families into the playground.

On Tuesday, the campaign moved to the Borough Park neighborhood’s Dome Playground. After the locks were cut, with the politicians and Tischler looking on, two police officers arrived at the scene.

Update: Cops have arrived after call for trespassing pic.twitter.com/CHnsysDVCX

In a video of the interaction posted to Twitter, the police officer is heard asking Yeger who cut the lock, as Yeger tells the officer that they are not obligated to answer his questions, and to call his boss.

“I’m looking at your badge and I know you’re not a boss, so call your boss,” Yeger says.

Benjamin Kanter, Eichenstein’s press secretary, said that the patrol officer who confronted the politicians was “overzealous,” and that the situation was resolved without summonses or arrests after a sergeant came to the scene.

Eichenstein said that de Blasio’s decision not to reopen the playgrounds despite their Sunday press conference and a letter they wrote to him left them “no choice” but to help physically remove the locks themselves, or endorse efforts to do so.

Eichenstein said he told Tischler to go ahead with the lock-cutting at the Williamsburg park on Monday.

“I told him not to worry, if he needs to be bailed out, I will personally bail him out,” he said.

Tischler said that the politicians who joined him on Monday were trying to share his spotlight. Tischler ran against Kalman Yeger to represent District 44 in the New York City Council in 2017, and received just under four percent of the vote; he plans to run for city council again next year.

“Thank God Mr. Yeger’s a lawyer — not that I don’t have seven lawyers of my own — and he helped me out with the police,” he added.

The rogue playground reopenings come as the Hasidic community is experiencing a low point in its regard for local and state government, said Rabbi Yeruchim Silber, the director of government relations for New York at Agudath Israel of America, an Orthodox umbrella group.

The Hasidic community’s frustration with de Blasio over his handling of a large funeral procession in April is still fresh: He famously blamed the “Jewish community” for the procession, despite the fact that community liaison police officers in Williamsburg helped plan it.

The incident fractured de Blasio’s usually strong relationship with the Hasidic community. The community has overwhelmingly backed his mayoral campaigns, and he personally helped stall a probe into the secular educational standards of New York yeshivas in exchange for help from Orthodox lawmakers to help preserve mayoral control of city schools, according to reporting by the New York Post.

Now the Hasidic community feels that the de Blasio administration is being hypocritical by encouraging peaceful protests over the police killing of George Floyd while keeping playgrounds closed.

“That’s where a lot of anger comes from: Not only was it allowed, it was encouraged,” Silber said.

There is suspicion in the Hasidic community that the playground closures are being enforced more intensely in their neighborhoods than in others, despite the fact that playgrounds remain closed across the city.

“I question why in my community I don’t have a single playground that’s open while other communities do,” Eichenstein said. “But all playgrounds throughout the entire city that are closed should be open.”

The New York City Department of Health and Mental Services referred questions about the reasons for the playground closures to the city’s Department of Parks and Recreation, which referred to de Blasio’s Tuesday morning comments.

“We never felt so singled out,” said Weiss, the Hasidic mother in Williamsburg, referring to what de Blasio said during the press conference. “He felt very comfortable explaining that that is more important than this, and those people were more important to satisfy than we were.”

Hasidic leaders are on a chain-cutting campaign to liberate playgrounds