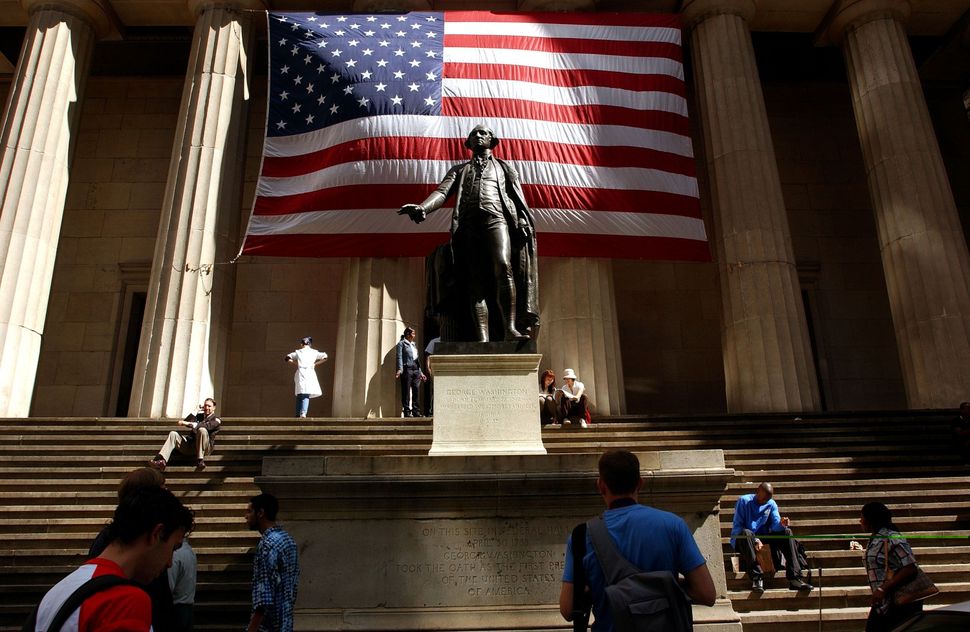 Should we honor men and women from the past whose beliefs or actions were odious by modern standards? This question has loomed large in our conversation during the recent protests against racial injustice.

Monuments to leaders of the Confederacy, a proudly racist regime that sought to perpetuate white supremacy and slavery, are the easy part. But now, many are arguing that George Washington and Thomas Jefferson, founders of this nation who championed liberty and equality but owned enslaved human beings, should also be knocked off their pedestal — literally and figuratively. Even the statue of the great American poet Walt Whitman on the Rutgers-Camden campus in New Jersey is now the target of a petition demanding its removal as a symbol of a “racist past” because of racist passages in Whitman’s writings.

The war over statues is part of a much larger debate: What should our schools and history books teach about slaveholders and racists from times past? How should we deal with art and literature by people who, by our standards, were bigots?

The controversy today focuses on anti-black racism and its continued insult to the human dignity of black Americans. But the dilemma — “How to deal with cultural heroes who hated, ridiculed, or demeaned people like us?” — is all too familiar to any Jew living in a culture of European origin.

It was certainly familiar to me as a Russian Jew growing up in a cultural milieu that idolized literary giants like Alexander Pushkin and Nikolai Gogol, whose brilliant writings were inescapably encumbered with odiously anti-Semitic passages. Pushkin’s play “The Miserly Knight” features a repulsive Jewish moneylender, listed in the cast of characters simply as “The Yid,” who tries to persuade a young knight to poison his father for the inheritance. Gogol’s novel “Taras Bulba,” an epic tale of a Cossack chief, treats a pogrom in which several Jews are drowned as a comical event. Even a somewhat sympathetic Jewish character, Yankel, who is saved by Taras and later helps him, is obsessed with “the everlasting thought of gold that twines like a worm around a Yid’s heart.”

As a teenager, I was acutely aware of pervasive anti-Semitism in Soviet society — some casual and explicit, some institutional and veiled. Yet the thought that Pushkin’s or Gogol’s anti-Semitism should erase their legacy, either as writers or as champions (however flawed) of humanistic values, would never have crossed my mind. As far as I was concerned, their books belonged to me as much as they did to anyone else.

My view hasn’t changed. I don’t want to cancel Pushkin. In fact, I was delighted to find out recently that his statue stands on the Georgetown University campus in Washington, DC since 2000, as part of a cultural exchange that, ironically, has brought a statue of the now-problematic Whitman to Moscow.

I don’t care that Pushkin had plenty of other sins besides anti-Semitism; not unlike some American Founders, he wrote moving words about liberty and hatred of tyranny but owned bonded peasants, or serfs, who were almost as powerless as slaves and fathered at least one child with a woman he had the legal power to sell, lock up, or whip. (Since Pushkin had an African great-grandfather and is sometimes described as a “Black Russian,” this means that Washington, D.C. has a monument to a black man who legally owned white people. Wrap your mind around that!)

I don’t want to cancel Gogol or Fyodor Dostoyevsky, the novelist who called for universal compassion but also published a newsletter filled with virulently anti-Semitic polemics. I don’t want to cancel Richard Wagner. I was appalled by the recent vandalism in Paris toward a monument to Voltaire, the great Enlightenment thinker who blisteringly denounced religious intolerance but also scorned Jews as innately prone to fanaticism and superstition.

I also have no problem with the fact that, while Germany would never allow a monument to a Nazi, it has plenty of monuments to Martin Luther, the great religious reformer who denounced the tyranny and corruption of the medieval Catholic Church but wrote two horrific tracts vilifying Jews as “the devil’s people” and urging a merciless war on the Jewish community. (As is sometimes the case, Luther’s hatred of Jews was the hate of a scorned lover: He initially condemned the oppression of Jews and hoped to convert them to his purified Christianity, but they wouldn’t cooperate.) Incidentally, there are also more than a dozen public monuments to Luther in the United States, mostly on the grounds of churches or private colleges, but at least one in a city-owned park in Baltimore.

The sad truth is that bigotry and oppression — based on race, ethnicity, gender, class, religion, and other things — were the norm in most cultures for most of human history; the principle of equal rights and equal dignity for all humans, however imperfectly realized in modern liberal democracies, is strikingly new.

But the story of humanity is also about much more than bigotry and oppression: It’s a story of achievement, discovery and creation, of heroism and mutual aid, of quests for knowledge, of striving for justice and a better life. To suggest that every man and woman through the ages who did not meet liberal standards of virtue should be cast off on the trash heap of history is a fanatical puritanism that would leave humanity’s heritage stripped nearly bare.

What’s more, in practice, the push for historical cancellations is rife with double standards, with only the heroes of Western cultures singled out for opprobrium.

In St. Louis, Missouri, for instance, there has been a contentious debate over the towering statue of the city’s namesake, King Louis IX of France. The 13th Century monarch was famed for his charity — he built hospitals, dined with beggars, and personally tended to lepers — but also led a crusade against Muslims and persecuted Jews. (In 1242, Louis ordered the burning of thousands of copies of the Talmud, condemned as “blasphemous;” he also threatened to expel all Jews from France but eventually settled for forcing them to wear distinctive badges on their clothing.)

The protests calling for the statue’s removal have been led by Muslim activists who say that it represents hate, anti-Semitism and Islamophobia. Yet the prophet of their own faith proselytized through violent conquest and engaged in his own persecution of Jews, including the massacre and enslavement of a Jewish tribe.

For years, American right-wing critics of Islam have had an obnoxious habit of hurling anachronistic accusations at Mohammed — like “war criminal” (which every medieval warrior was, by modern standards) or “pedophile” (child marriage was widely accepted in both Muslim and Christian societies, and medieval legal authorities held that girls as young as seven could consent to marriage). Today, social justice activists are doing the same to the “Islamophobic” King Louis.

It’s also worth recalling that even recent heroes of progressive causes can fail the test of modern values. Women’s suffrage pioneers Elizabeth Cady Stanton and Susan B. Anthony, whose monument will soon be unveiled in New York’s Central Park, sometimes stooped to racist rhetoric when decrying the injustice of granting the vote to black, Irish, and Chinese men but not to white women.

Some have claimed that Martin Luther King Jr.’s extramarital womanizing would put him on the wrong side of #MeToo-era standards, or even make him a “misogynist,” in the words of scholar and podcaster Glenn Loury, who is black. King also expressed the view that same-sex attraction was a “problem” in need of “a good psychiatrist” — conventional wisdom in 1958 when he wrote those words, homophobic bigotry in 2020.

Finally, who knows which of our own attitudes and behaviors will be considered abhorrent in a hundred years, or perhaps even in our own lifetime? Progressives always seem to assume that the evolution in societal beliefs can move only in the direction of what they would consider more perfect justice: Common predictions are that we’ll be considered barbarians for tolerating the slaughter of animals for food, or the carnage inflicted by cars. But has it ever occurred to them that someday support for abortion rights may be seen the same way we see support for slavery? And I say that as an abortion rights supporter.

Given all this, I believe it behooves us to be humble in our judgments. One good yardstick for deciding whether historical figures with a tainted record should be honored is whether, as Washington Post journalist Radley Balko put it, they are being honored “in spite of their sins” or “because of their sins.”

In other words, the Confederates are out; Washington, Jefferson, Luther, Voltaire, Pushkin, Stanton, Anthony, and Whitman — and Louis IX — are in.

It’s true that far too often in the past, such “sins” as slaveholding, anti-Semitism, racism or misogyny have been glossed as mere “flaws” of great men (and sometimes women). We need to do better than that. But we also shouldn’t reduce those men and women to their worst. Are Whitman’s obscure racist statements more important than the radical egalitarianism of his poetry, which celebrated the diversity of humanity including the “black, divine-souled African” and affirmed that “the same red-running blood” flows in black and white bodies?

The real victory over bigotry is not to reject the legacy of past figures whose complex lives included beliefs and actions we rightly consider abhorrent; it is to claim the best of their legacy, even if their prejudices excluded people like us. Frederick Douglass did exactly that in his famous speech, “What to the slave is the Fourth of July?,” in which he claimed the Constitution as a “glorious liberty document” for the enslaved.

Leonard Bernstein, a Jew, adopted Voltaire’s novel “Candide” into a popular operetta. The prevalence of Jews among Pushkin scholars in Russia has long rankled anti-Semites. Whitman, in the words of Whitman scholars George Hutchinson and David Drews, “has been adopted as a poetic father by poets of Native American, Asian, African, European, and Chicano descent.” Today, our biggest theatrical hit is a hip-hop musical that reimagines the story of the Founding Fathers with a multiracial cast.

Power to them. It’s time to replace cancel culture with cultural appropriation.