Public Education is a Jewish value 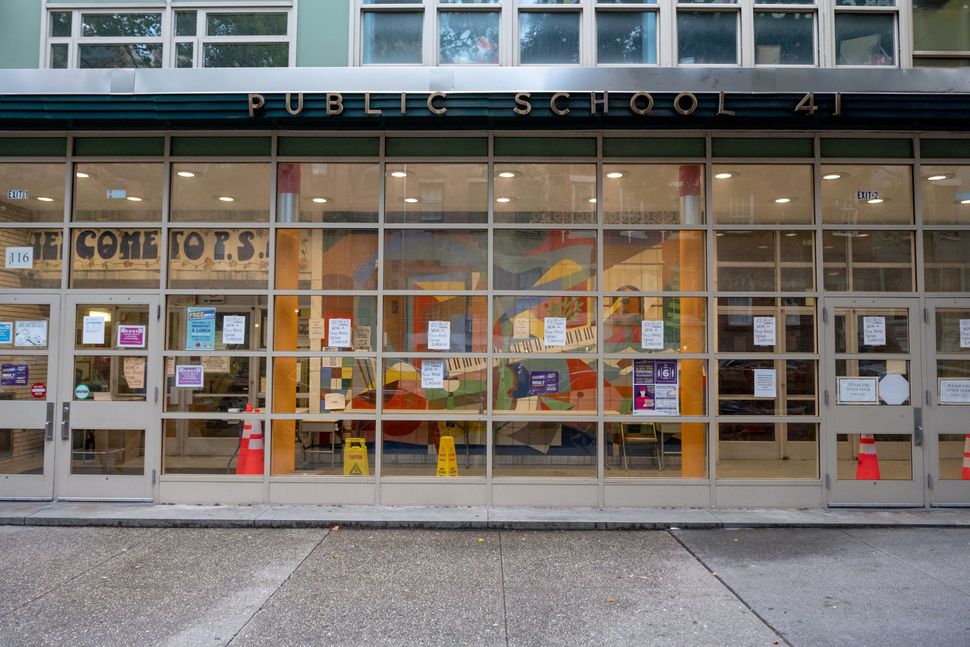 NEW YORK, NEW YORK - JULY 08: Handwritten ‘You must wear a face mask sign’ are seen in the windows of a public school in the Greenwich Village as the city moves into Phase 3 of re-opening following restrictions imposed to curb the coronavirus pandemic on July 8, 2020 in New York City. Public Schools have been closed since mid March 2020. Phase 3 is the third of four-phased stages designated by the state. (Photo by Alexi Rosenfeld/Getty Images) Image by Getty Images

Our legacy as the most successful Jewish diaspora community in our people’s history is thanks to two things: the right freely to exercise our religion without state interference and the extraordinary education our ancestors — and our kids today — received and receive — through public education. Everything about our experience as American Jews is resonant precisely because of the separation of church and state. But, we must be ever-vigilant to maintain these freedoms.

Never in more than two centuries of American history has the free exercise clause of the First Amendment been wielded as a weapon to defund and dismantle public education and upend the principled, non-discriminatory provisions to protect public education that the overwhelming majority of states have adopted. Until now.

Last week, the Supreme Court’s narrow conservative majority joined with President Trump, Secretary of Education Betsy DeVos, and wealthy GOP donors and special interests to attack public education and turn the First Amendment on its head when they ruled in Espinoza v. Montana Department of Revenue to allow funds meant for public education to be diverted to private religious education.

What’s even more disturbing is that some justices wanted to go even further. They rejected the arguments of dozens of education, religious and civil rights organizations, and legal experts — along with 10 states — all of which filed amicus briefs to protect public education and religious liberty. Bottom line: This was an ideologically motivated decision.

While the court didn’t invalidate the 38 state constitutional provisions that preclude public money from going to religious schools, it came very close to doing so. The financial underwriters of this case will now use it to open the floodgates to litigation across the country — including in both city and state in New York, where scarce resources should be used to safely reopen classrooms, not for defending lawsuits in courtrooms that privilege only a few and are aimed to take money from the public sector.

Upending the carefully constructed balance of free exercise and separation of church and state not only undermines public education, it poses a grave threat to religious institutions and organizations. By enabling this encroachment on religious liberty, the Court opened up religion to state control and state interference, because public funding comes with public oversight and accountability.

Secretary DeVos hailed the decision as an “historic victory” and called on states to expand these programs across the country. It is telling that, after spending more than three years doing virtually nothing to help the public schools that 90% of children in America attend, DeVos is now racing to divert resources into private hands in the wake of the Espinoza decision.

The high court’s ruling completely turns our beloved Constitution on its head. This isn’t surprising from this right-leaning Court, but it’s worrisome for a community like ours that relies on the guarantee of free exercise of religion and the separation of church and state in order to thrive. Contrary to Avi Shafran’s argument in these pages last week applauding the decision, the Court has made it less safe for us to practice our religion in America, not more so.

Each Shabbat, we take refuge from the week’s troubles to reflect on how our centuries of Jewish teachings can empower and inform the week to come. Both of us greatly understand and appreciate the importance of transmitting Jewish education to new generations.

This is a debate about what kind of America we want and what values we as a Jewish community hold dear. This is a debate about the amazing pluralistic Jewish community that the United States has fostered, about how all of us are free to practice the Judaism with which we connect and support the values — whether liberal or conservative — that we hold dear. Each one of us.

In the midst of a pandemic, an economic recession, and a once-in-a-lifetime national debate about structural racism, it’s unconscionable that the U.S. Education Secretary spied an opening to exploit this crisis to resuscitate her failed agenda to privatize and starve our public education system. It’s especially sickening that, in the middle of a national reckoning over race, when poor schools are in desperate need of funds to reopen safely, Secretary DeVos is actively seeking to shift support away from where it’s needed most.

As persons of faith, we are deeply worried about the impact this case could have. The framers never intended to require public funding of religious institutions or schools. In fact, that’s exactly the type of entanglement that the free exercise clause and the separation of church and state were meant to prevent.

This ruling will hurt the 90% of students who attend neighborhood public schools, by siphoning off needed funds, and, in the long term, will also hurt those who attend religious schools by curtailing their freedom with the accountability that comes with tax dollars.

This period of national crisis has underscored the importance of our public schools. Parents in our home state of New York and across America are impatiently waiting for schools to reopen. To do so, the schools need adequate funds for both a safe learning environment and education.

Children across the country rely on public education for far more than just academics: 30 million kids eat lunch in school, 12 million eat breakfast in school, and schools provide many with their healthcare.

Especially now, we should be prioritizing additional resources for public education and other vital social programs, not diverting them to private purposes. Ensuring that our nation is more equal, just, that no children go unserved, hungry or without the necessary support they need to attain better lives, is an American value. It is also a Jewish value.

Public Education is a Jewish value