How Israel made the occupation taboo in schools 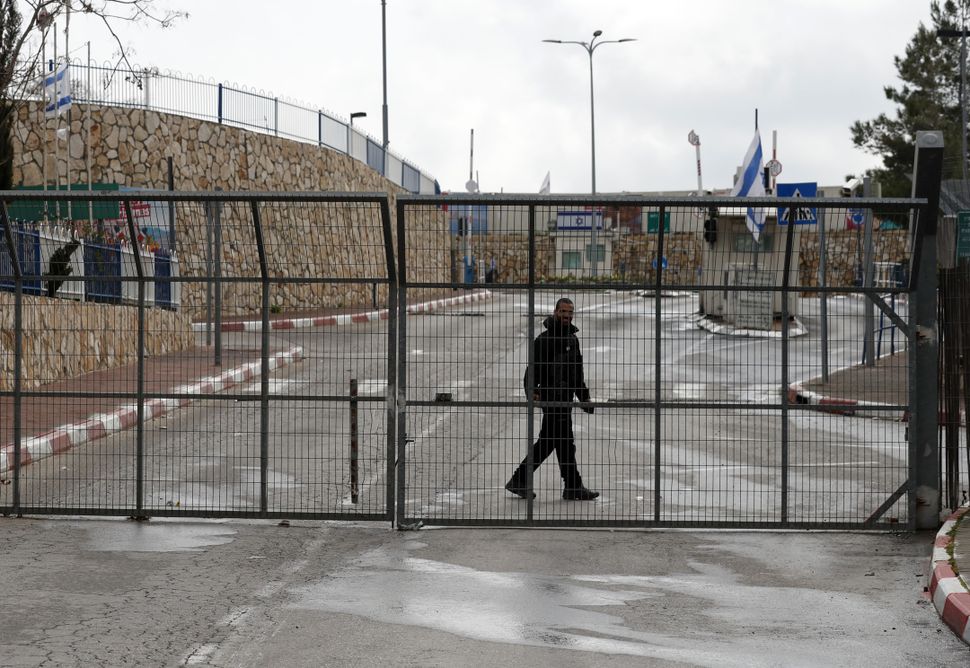 A member of the Israeli security forces mans a checkpoint in Jerusalem on a road leading to Bethlehem that has been shut down as emergency measures are being implemented to limit the spread of the coronavirus COVID-19, on March 6, 2020. (Photo by Ahmad GHARABLI / AFP) (Photo by AHMAD GHARABLI/AFP via Getty Images) Image by Getty

Annexation doesn’t mean much to Israelis. Israeli publicist and author Rami Livni wrote captured it aptly when he wrote about a few weeks ago. “The reason Israelis accept annexation is not because they believe in it, it is because of a lack of knowledge,” he wrote in Haaretz. “They don’t know what annexation is. They don’t understand the meaning of the word… Today the word ‘annexation’ is a hollow sound, a knock on the door of an empty closet.”

But what’s even more striking is most Israelis’ complete ignorance when it comes to the occupation of the West Bank.

Growing up in Israel, I never heard the word “occupation” — not once. I never learned about it in history class, nor did I hear the word in civics class. As a student, I was never told that the territories are governed by an Israeli military regime, or taught about the political and legal status of the Palestinians in the area. There may have been a single line in my history books, but if there was, it was slight enough to miss.

My experience was not unique, according to a recent study by Avner Ben-Amos, an Israeli Professor from Haifa University. Ben-Amos examined the contextual change in educational materials in the 30 years since the Israeli victory in the Six-Day War. Specifically, he reviewed the textbooks of three subjects: history, civics and geography. What he found was that “the Jewish control and the inferior status of the Palestinians are appearing in the textbooks as a natural phenomenon, one that you don’t need to pay too much attention to.” The study also found that books that depict a wider narrative about the occupation have been dismissed and disqualified by the subsequent education ministries.

Alarmed by Israelis’ ignorance, academics and politicians have tried over the years to convince the education ministry to include textbooks about the occupation and the Nakba — the 1948 Palestinian exodus. One of them is Tel-Aviv University historian Eyal Naveh, who wrote a book that teaches the Israeli narrative along-side the Palestinian one.

Once published, the book was immediately rejected by the education ministry committee. Surprisingly, one of the former education ministers himself, Rabbi Shai Piron, did mention that he believes all Arabs and Israelis should learn about the Nakba, but was only brave enough to do so after he left his position.

As a civics teacher who was interviewed about the study in Haaretz put it, “It’s kind of a taboo. You don’t talk about the Palestinians living under a military regime and there’s a cloud over every teacher who talks about it. These issues aren’t discussed in class at all. The result is that students can’t understand the world they live in.” Ben-Amos describes this as an attempt from above “to hide and silence.”

When teachers choose to defy the official dictated curriculum and teach about the occupation, they either hide it or eventually get fired. Such was the case with the seasoned civics teacher who lost his job this year, after criticizing the IDF and the occupation in class.

In rare cases, the indoctrination of the ministry fails. This occurred when the veteran school principal Zeev Dgani fought with the ministry over allowing the NGO “Breaking the Silence” to lecture in his school about soldiers’ testimonies who served in the territories and prevailed.

As is Israel, many millennial American Jews suffer from the same ignorance imposed by American Jewish organizations. In one of their central campaigns led by IfNotNow, an anti-occupation group, initiated the #YouNeverToldMe campaign a year ago, blaming Jewish institutions for not teaching them about the occupation.

In a message sent out to their fellow alumni of Jewish camps, schools and youth movements, members of IfNotNow urged fellow young Jews to “change their Israel education to include an honest understanding of the occupation and Palestinian narratives.” They had limited success. While some institutions agreed to work with them and revise their programs, others backed off from their initial interest, fearing backlash from donors and parents who might prefer to maintain the status quo.

It is true that many Israelis and Jewish Americans are well versed with the background and motives regarding the occupation. But it is mostly a reflection of a concentrated effort led by “Breaking the Silence” and other civil society NGO’s, rather than a top-down, institutionalized effort led by Israel and the American Jewish community.

If we are not equipped with the tools to understand the roots of the conflict, its context and history, we are doomed to blindly accept our politician’s decisions, paralyzed by our inability to criticize them. This is how we end up in a situation where Israel and the United States come together to propose something as disastrous as annexation, knowing that the majority of Israelis and Americans will remain indifferent to the costs of such policies.

To fight this ignorance, Israel and American Jewry must revise their entire educational approach. They must implement a systematic change in the educational systems and expose the next generation to the widespread injustice which occurs daily in the West Bank. If we care about Israel’s future, we can’t let things run their course. After all, we can’t fight what we don’t know.

Adi Adamit-Gorstein is a second-year MPA Candidate at NYU Wagner Graduate School of Public Service specializing in international development. She started her professional career as a journalist in Israel and later worked as a public relations strategist focusing on communication strategies for NGOs and political candidates.

How Israel made the occupation taboo in schools