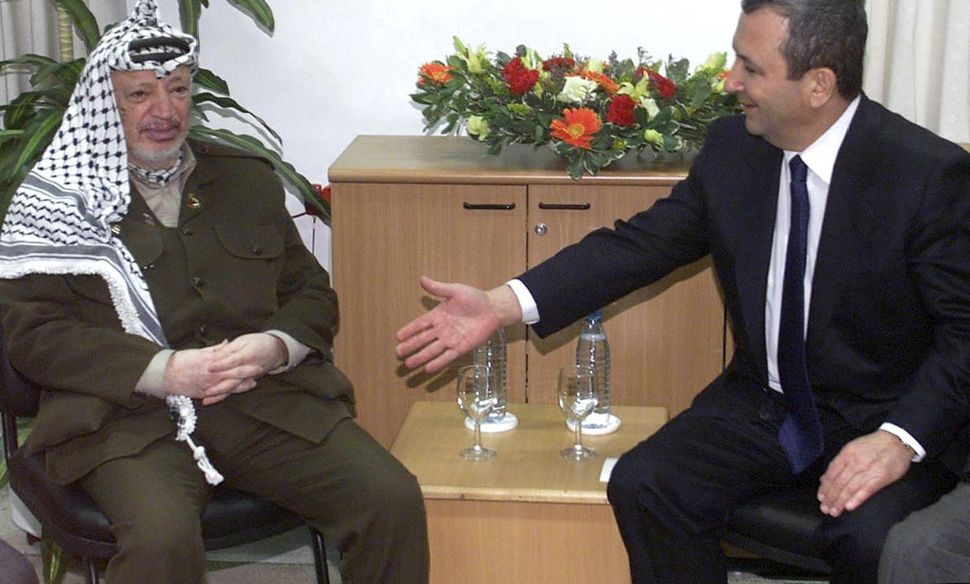 Twenty years ago, in July 2000, we were filled with hope as Ehud Barak, Israel’s Prime Minister and leader of the Labor Party, left for Camp David to negotiate a final peace agreement with the Palestinians. After more than a decade of previously unimaginable historical breakthroughs – the collapse of the Soviet Union, the fall of the Berlin Wall, the end of Apartheid in South Africa and the Good Friday Agreement in Northern Ireland – we believed we had arrived at the historical moment when peace with the Palestinians might finally be at hand.

Barak placed a bold proposal on the negotiating table that would have provided the Palestinians with an independent sovereign state in almost all of the West Bank and Gaza, without a single settlement in sight, and a capital in east Jerusalem, including holy sites. And we were certain the Palestinians would say yes. After all, for decades we had been told that the key to peace in the Middle East was for Israel to hand over land – “land for peace” – and Barak had just agreed to hand over the land to the Palestinians.

Moreover, we made the straightforward assumption that when a people who seek to govern themselves in their own state are presented with the opportunity to do so, they say yes.

Had he not walked away, the state of Palestine would have celebrated twenty years of independence this year, in its capital in Jerusalem.

So why did he walk away? Why did Arafat not say a resounding yes when presented with the opportunity to give his people the liberty and dignity of political independence? And why did he face no criticism whatsoever from his people for doing so? What did the Palestinians actually want if not an independent state in the West Bank and Gaza with its capital in east Jerusalem?

The answer was hiding in plain sight: the right of return.

The overriding Palestinian demand, more important than the explicit demand of statehood, has always been the innocuous sounding right of return — the demand for millions of Palestinians, descendants of those who fled or were expelled in the 1948 war, to be recognized as possessing each a “right” to settle inside the state of Israel. This right, not sanctioned by international law, crucially overrules Israeli sovereignty; since the number of these Palestinians is between five and nine million, and since Israel’s Jewish population is about seven million, the meaning of such a demand is the transformation of Israel into an Arab state.

And this demand for a massive collective right to enter Israel has been inseparable from the larger negotiations from the Palestinian side. What this means is that when Arafat and Mahmoud Abbas, the head of the Palestinian Authority, spoke of their support for a two-state solution, they actually envisioned two Arab states: one in the West Bank and Gaza, and another one to replace Israel.

This is why Arafat walked away in 2000. “Recognition of the right of return,” said an internal PLO memo written a short time after the Camp David summit, “is a prerequisite for the closure of the conflict.” The same week, an official magazine of Arafat’s faction within the PLO wrote that the mass return of Palestinian refugees to Israel would “help Jews get rid of racist Zionism.”

Eight years later, When Secretary of State Condoleezza Rice sketched out the details of Israeli Prime Minister Ehud Olmert’s peace proposal to Abbas in May 2008, his telling response, quoted in her memoir “No Higher Honor,” was, “I can’t tell four million Palestinian [refugees] that only five thousand of them can go home.”

And as in 2000, there was no criticism of Abbas for depriving Palestinians of a state, no Op-Eds saying that this was a great opportunity that should have been grabbed with both hands, and no NGOs calling on Palestinians to move on from the fixation on return.

One thing Abbas might have told these Palestinian refugees was that the twentieth century saw many empires collapsing and nation-states established, often in a bloody and painful process of land division and border drawings that caused the death and displacement of tens of millions of human beings. Many of them, just like the Palestinians, wanted to return to the places where they had lived before. But it was only the Palestinian demand to resettle inside the State of Israel that was indulged and sustained in such a way by the international community. The fact is, no other refugee population exists from the 1940s. They have all moved on to build their lives in the places to which they fled or in other countries.

The Palestine Liberation Organization did undergo a shift at the end of the 1980s. The collapse of the Soviet Union, the PLO’s military, diplomatic and economic patron for decades, forced the Palestinian organization to look for support in the West. That in turn forced the PLO to change its tone, while not its core position: the total rejection of the State of Israel. Gone were the days of the revolutionary violent rhetoric; the need to solve the conflict in peaceful means came to the front.

But this was only tactical, and has not as yet done anything to put a dent in the maximalist vision of Arab rule over the entire land manifested in the demand for a “right of return,” which has never been taken off the table, and to which the goal of two-states was always subordinate.

Further evidence for how much the Palestinian leadership was willing to sacrifice the two-state solution to the right of return came in 2011, when some 1,700 original documents were leaked from the office of chief Palestinian negotiator Saeb Erekat and published online by Al Jazeera. The documents, known as the Palestine Papers, were internal PA memos and other papers, which document a decade of peace negotiations with Israel.

The papers reveal that the Palestinian leadership was so serious about the “right of return” that they were unwilling to countenance phrases and formulations that might jeopardize it – including “two states for two peoples,” which was viewed as a threat to the realization of the demand to return. In a memorandum for Saeb Erekat on May 3, 2009, for example, the negotiating team writes, “Reference to the right of the two peoples to self-determination in two states may have an adverse impact on refugee rights, namely the right of return… Further, a recognition of the principle of two states for two peoples as a solution to the Israeli-Palestinian conflict confirms that the PLO no longer envisages Palestinian self-determination within the territory of the state of Israel.”

In another memorandum dated November 2007, the Palestinian negotiating team explained that recognizing Israel as a Jewish state “would likely be treated as … an implicit waiver of the right of return” and “would undermine the legal rights of the refugees.”

Another document from June 2008, which makes recommendations on the refugee issue, notes that the formulation “‘two states for two peoples’ implies no return… to Israel.” And a document from May 2009 states that as far as refugee rights and Israel’s responsibility for the creation of the Palestinian refugee problem, “referring to ‘two states for two peoples’ embodies similar risks to those associated with the recognition of Israel as the state of the Jewish people.”

These documents reveal not just efforts to undermine the two-state solution; they reveal that it was never an option in the first place.

One hears a lot these days about the death of the two-state solution. Israel, we are told, killed it off with settlement expansion. Or it was the U.S. who killed it by moving the embassy to Jerusalem.

The truth is, the two-state solution was never killed — not by Israel or the U.S. — because in the Palestinian vision, it was never conceived.

Jews and Arabs have the right to live in freedom and dignity, and to possess the political power to secure both their individual and collective rights. But for that to happen, the biggest obstacle must be recognized right now and addressed upfront.

The demand of massive Palestinian entry into Israel, uniquely indulged by the west for generations, should be rejected. As long as Palestinians reject the equal right of the Jewish people to political power and self-governance in any part of the land and seek to undo it through “return,” no political solution will bring peace.

Dr. Einat Wilf and Adi Schwartz are the co-writers of “The War of Return: How Western Indulgence of the Palestinian Dream has Obstructed the Path to Peace,” recently published by St. Martin’s Press.