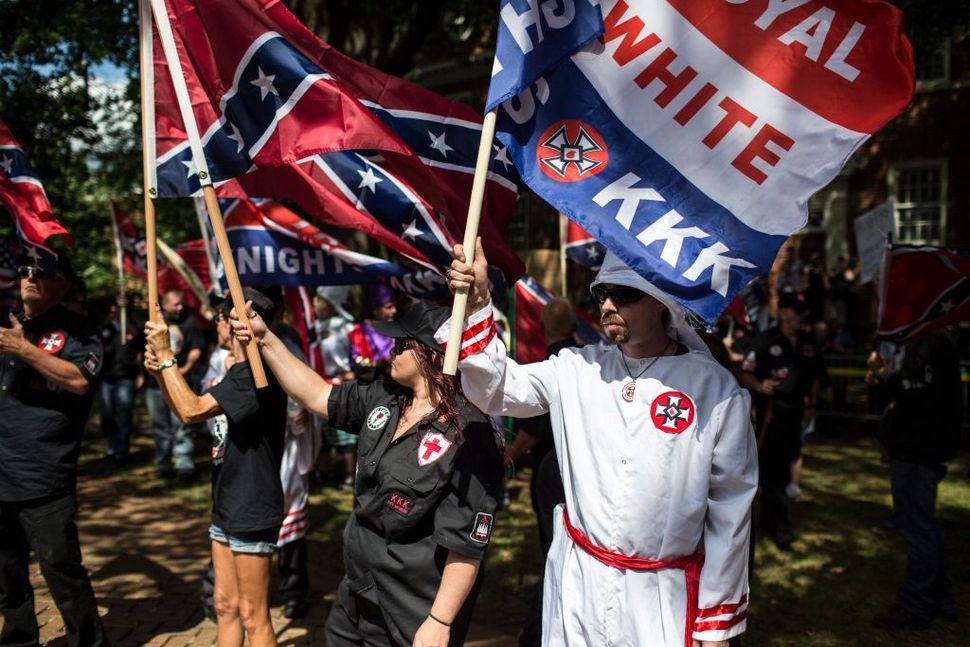 America feels like a country on the brink. We have been sickened by a global pandemic, shaken by waves of protests and suffocated by political paralysis. But as we pause to recall the anniversary of the “Unite the Right” white supremacist rally in Charlottesville, hate could be the most damaging condition affecting our country.

A clear symptom of this hate is the reality of racism. The Black Lives Matter movement has opened a long overdue reckoning on racial justice, but it also has been greeted by a torrent of anti-Black prejudice. The COVID-19 crisis unleashed an ugly strain of anti-Asian harassment and violence. And there was a record number of anti-Semitic incidents in 2019, including deadly attacks in California, New Jersey and New York, along with a wave of assaults in Brooklyn even as 2020 has brought a surge of anti-Jewish conspiracy theories.

This day, when we remember the 2017 melee in Charlottesville, unity has never been more essential. We recall how white supremacists marched openly in the streets that weekend, bearing torches and spouting bigotry. They brazenly murdered Heather Heyer and revealed themselves as a clear and present danger to our democracy.

In the face of such extremism, marginalized groups need to lock arms against our mutual enemies. If not confronted, these forces will tear at the fabric of our society. It seems obvious that we cannot isolate ourselves but need to work together to defeat such hate.

Because racism isn’t just a problem for Black Americans; it’s my problem as a white Jewish man.

And anti-Semitism isn’t just a problem for American Jews; it’s my problem as a non-Jewish Black man.

And yet, today, the Black and Jewish communities don’t always seem to stand together.

To be clear, we all enjoy certain rights today in part because we stand on the shoulders of giants, men and women who worked hand-in-hand just a few generations ago for the common good.

At the turn of the 20th century, the Anti-Defamation League was catalyzed by the lynching a Jewish man outside Atlanta, a grotesque crime that happened with horrifying regularity to boys and young men of color across the South. In the ensuing years, ADL and other Jewish groups closely collaborated with NAACP and other civil rights groups to create a better America to benefit Blacks and Jews. Together, we drove change in the courts, fought back in the streets, and marched in Selma and other cities across the country.

Our powerful alliance didn’t solve all our problems, but it sought to elevate all of us.

But in recent years, these ties have frayed. Our communal groups have not always partnered. Our collective interests often have diverged. Loud voices on the fringes have contributed to the distrust and created even more distance. Today, certain voices seem intent to push us even farther apart.

This needs to change. Now.

So how do we go forward?

Change starts by acknowledging the personal responsibility of each of us in perpetuating stereotypes, whether we do so intentionally or not, and accounting for our actions. It continues by advancing an agenda of learning, so we study and come to understand our respective histories so we can be better allies to each other. And it is sustained by accelerating efforts to collaborate, even when it’s uncomfortable, so we can create authentic change that uplifts everyone because we cannot be free until everyone is free.

This doesn’t mean that we have to abandon our core beliefs or surrender our strongly held convictions. But we can’t afford to allow our differences to divide us, especially in the face of the hate that threatens all of us.

Nor will we allow marginal voices in our communities to tear us apart. They certainly will try. But when Blacks and Jews fight one another, racists rejoice and bigots celebrate, even as the silent majority among our people mourn, especially the Jews of color caught between two worlds.

And so, let’s remember Charlottesville this year by recommitting to one another in pursuit of racial justice and renewing our shared struggle against extremism in all forms.

Nick Cannon is a comedian, rapper, producer and television host. Jonathan Greenblatt is CEO and National Director of ADL (the Anti-Defamation League).