They told us the sky would fall if Trump stood by Israel. They were wrong. 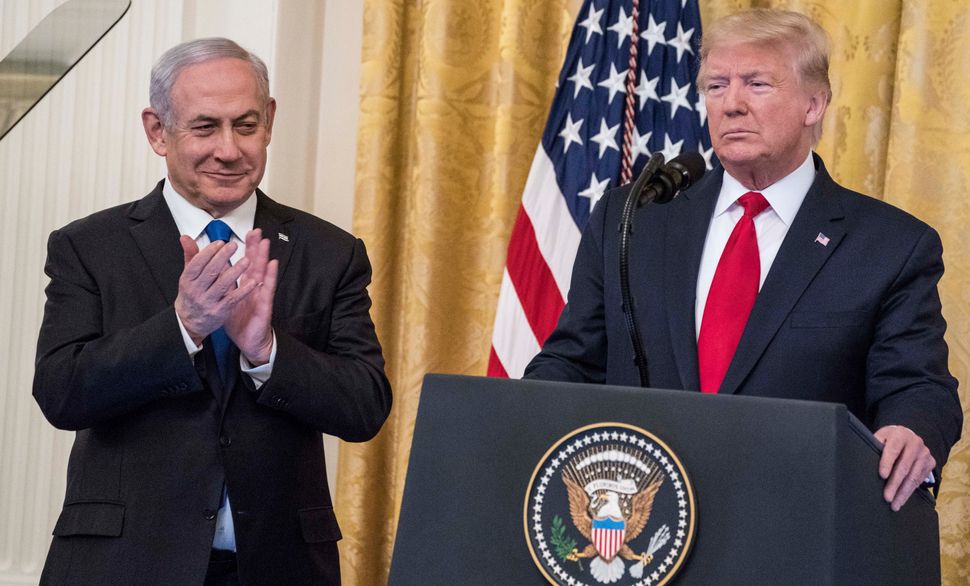 That’s right, look up. The sky is still there.

When President Donald Trump moved the U.S. Embassy from Tel Aviv to Israel’s capital, Jerusalem, the old-guard Washington foreign policy community said the sky would fall. When President Trump approved the Israeli annexation of the Golan Heights to formalize Israel’s northern border, those same policy wonks ducked because they were sure the sky was falling. And, when President Trump hosted Israeli Prime Minister Benjamin Netanyahu at the White House to announce a “Vision for Peace” that would include the application of Israeli sovereignty to parts of the West Bank, the wonks were cowered in the basement, terrified of being hit by that falling sky.

The wonks, perhaps, didn’t notice that while they were trying to hold back reality in hopes that the Palestinian Authority just needed more time, more money, and more Israeli concessions to become a contributing partner, and while they assumed a “two state solution” would have Iran-supported Hamas disappear, Israel and the Gulf Arab states were already moving forward. Together.

The driving factors for both parties include Iran, American elections, and Arab irritation with the two-headed Palestinian Authority-Hamas governments.

The Islamic Republic of Iran is under enormous financial pressure, thanks to President Trump’s “Maximum Pressure Campaign.” There has been substantially less money for Tehran to pay off its allies and Shiite militias in Syria, Lebanon, and Gaza. Last week’s horrific explosion in Beirut simply compounded the difficulties for Iran’s Hezbollah proxy. And at home, angry Iranian citizens have been demanding more freedom and better services — including a better response to COVID-19. Demonstrators have chanted, “Not for Gaza, not for Lebanon — only for Iran.”

Under internal and external pressure, the government in Tehran may collapse or it may strike out at its neighbors, and it certainly will try to hang on until after the U.S. election in November. The mullahs hope that their preferred choice, a Democrat administration, will look for ways to bring Tehran back to negotiations and be willing to pay a high bribe to do it. That is, of course, how it worked in 2015 with the Joint Comprehensive Plan of Action.

The problem of Iran was reason enough for the UAE, and also Bahrain, Saudi Arabia, and Oman, to create quiet but strong channels to Israel. Some intelligence, some weapons, some Israeli drip irrigation technology, and more than a little bit of conversation about the future allowed the Gulf Arab states to reconsider their longstanding refusal to publicly recognize the legitimacy and permanence of Israel in the region.

One key moment was likely the arrival of an unmarked jet from the UAE at Ben Gurion Airport in May, filled with COVID-19 relief supplies for the Palestinian people in both the West Bank and Gaza. The Palestinians refused to accept the generous gift. The UAE tried again, this time using planes emblazoned with Etihad Airways, the UAE national airline. Again, the Palestinians refused, but the UAE had made its point.

Maybe that’s enough. Maybe when you’re willing to let your people go hungry or die of disease, other people decide that your failed leadership can’t determine their foreign policy.

And what about Israel?

Israel has done an amazing job of focusing the world’s (often reluctant) attention on Iran’s nuclear weapons and ballistic missile programs and preventing Iran from digging its military deeper into the wreckage of Syria and Lebanon. The Gulf Cooperation Council issued a unanimous statement this week calling for an extension on the arms embargo on Iran. Israel has never before been in that company, together with the United States, on such a crucial issue.

Somebody has to hold up the sky, and this is the new coalition.

Norm Coleman served as U.S. Senator from Minnesota from 2003-2009. He currently serves as chairman of the Republican Jewish Coalition.

They told us the sky would fall if Trump stood by Israel. They were wrong.