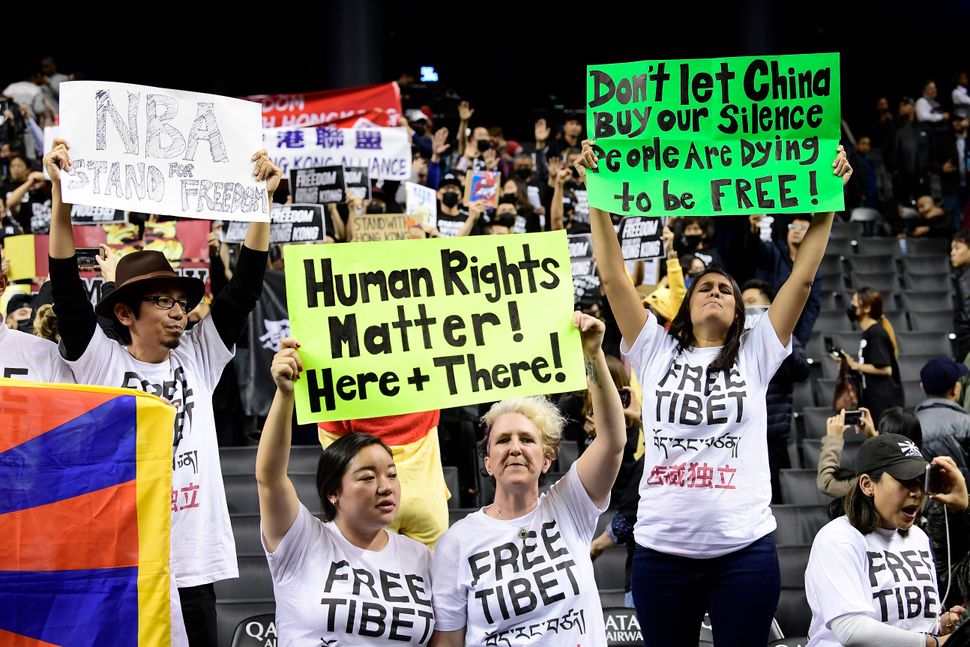 If you watch the video footage of blindfolded Uighurs – members of a Muslim minority based in Xinjiang, China – being loaded onto trains for a mass population transfer, you’ll find it hard not to recall similar persecution that has taken place across history, from the ethnic cleansing of Bosnian Muslims during the war in the Balkans to the mass detention and extermination of Jews in the Holocaust.

In light of these abuses, it’s understandable for Americans to shrug and ask ourselves what we could possibly do to help these poor people.

The Council on American-Islamic Relations, the nation’s largest Muslim-American advocacy group, has an idea. It first called on the NBA to close its academy in Xinjiang in August of last year. Now, it’s asking the NBA to end all of its operations in China until abuses against Uighurs have come to a close.

“The NBA continuing to operate in China under these circumstances would be akin to operating in Germany during the 1930s as the Nazi regime began to round up its Jewish citizens prior to the start of the Holocaust,” wrote Edward Ahmed Mitchell, CAIR’s National deputy Director in a letter to the NBA.

Robert McCraw, director of CAIR’s Government Affairs Department, told me in an interview that since last year, the NBA has not directly responded to its lobbying related to the plight of the Uighurs. But he pointed to the NBA’s own touted values as a reason they should act.

“We realize the NBA has a long historical commitment to standing up for social justice issues. And we want them to put their money where their mouth is,” McCraw said. “In no good conscience could the NBA be operating in China where Hong Kong free democracy protesters are being disappeared and there are one to two million Uighurs in concentration camps suffering under the legal definition of genocide.”

If the NBA’s executives are looking for a reason to comply with CAIR’s request, they could look at an Associated Press story from earlier this summer that showed that the Chinese government has performed forced sterilization and abortions on perhaps hundreds of thousands of Uighur women – suggesting that the Communist Party’s ultimate goal is not just to wipe out Uighur culture and religion through incarceration and indoctrination, but perhaps the Uighurs themselves.

By choosing to boycott China, the NBA could hit China where it hurts.

Unlike the Evil Empire of old, the source of China’s power is in its economy, not its military prowess. The armada of Western firms operating in China give it all of its leverage on the world stage.

The NBA is one of those public-facing companies. Last year, we saw exactly how touchy China is about the NBA, as a simple tweet from the general manager of the Houston Rockets in support of pro-democracy protesters in Hong Kong set off a massive backlash from the Chinese state, including the temporary suspension of broadcasts of league games in the country.

But the NBA and China soon made up, as a country of 1.4 billion people increasingly curious about the rest of the world wants to see American basketball. That suggests that the NBA is an entity with real social and cultural power in China, able to negotiate even with the powerful Chinese Communist Party.

But that leverage goes both ways: When the NBA revealed the activist slogans it is allowing its players to wear, not a single one mentioned anything happening in China.

A recent investigative report from ESPN revealed the depth of the league’s cooperation with the Chinese state. It found that Chinese partners were abusing younger players at academies operated by the NBA. Eventually, the NBA shut down its facility in Xinjiang, but it’s not clear if human rights played any role in their decision.

The NBA does not publicly reveal how much money it makes in China, but it is estimated to be upwards of four billion dollars annually. It’s clear that the league does not want to risk upsetting its Chinese sponsors, even though its growing fanbase in the country means that it has leverage that it could potentially use to shift the Chinese state. But the NBA is vulnerable to pressure from two groups of people. First, American consumers could make clear that if the league wants people to watch its games and buy its merchandise, they must demonstrate a commitment to human rights. And second, the NBA’s players themselves – many of them outspoken about social issues in the United States – could choose to speak out.

What if, for instance, a player wrote the words “Free the Uighurs” on their jersey before taking to the court? As important as causes like police reform are, wearing an activist slogan approved by your boss is hardly radical. But if an outspoken player were to force the league to address its complicity with Chinese human rights abuses, they could rally the public to their side and put pressure on Commissioner Adam Silver.

By demanding that the NBA and other Western firms tell the Communist Party that their participation in the Chinese economy is dependent on Uighur human rights, there’s at least a chance we can make “Never Again” a reality.