Biden has always sided with Israel. He will be the last Democratic leader to do so. 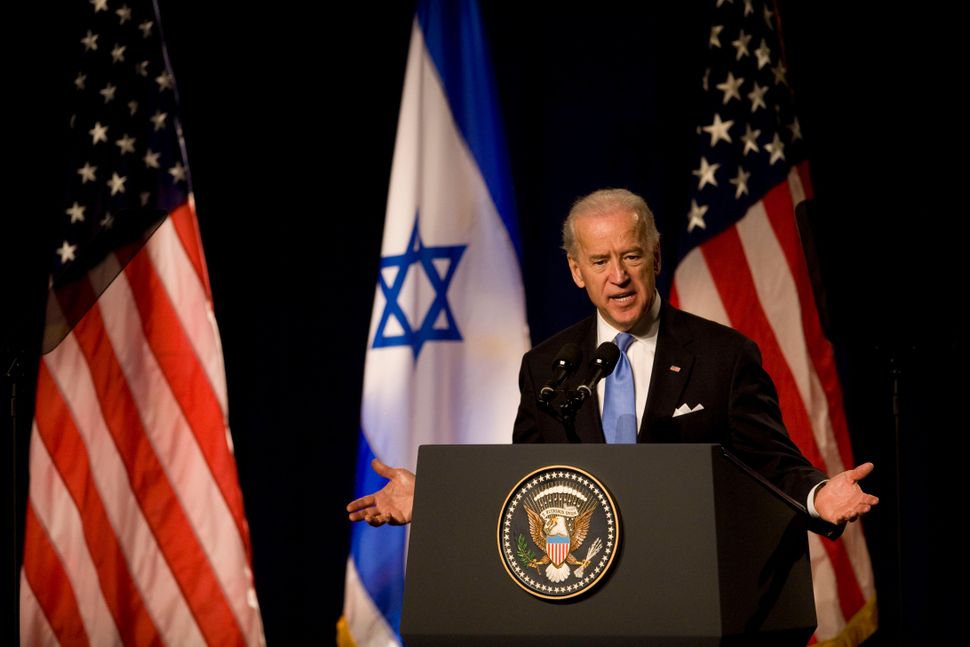 With ten weeks left until the election, the Joe Biden presidential campaign has affirmed that it intends to strike roughly the same posture on the Israeli-Palestinian conflict as President Obama did. In a newly published platform aimed at the Arab American community, Biden’s camp reiterates that while the former vice president will defend the free speech rights of all Americans, he will continue to oppose the Boycott, Divestment, and Sanctions movement towards Israel.

More detail can be found on the Jewish American section of the platform, where Biden’s campaign pledges that he will “guarantee that Israel will always maintain its qualitative military edge,” while boasting of his past commitment to military aid to Israel.

Every year, the United states gives Israel more than $3 billion in subsidies used to support that nation’s military. This aid has long been criticized by many Arab American activists, who believe that it is used to abuse Palestinian human rights in the West Bank and Gaza. They also argue that the aid serves as potential leverage that could be used to pressure Israel to make peace.

History suggests there is some merit to this claim: George H.W. Bush’s delay of loan guarantees, for instance, helped force Israel to agree to new peace talks and slow down settlement construction. But more recent presidents have refused to use this same form of leverage. Take President Obama’s approach, for example: During the tail end of his presidency, Israeli leader Benjamin Netanyahu added over 100,000 settlers to the settlements under his watch, and Obama essentially rewarded him for it by signing a formal memorandum guaranteeing a record $38 billion in military aid over ten years.

Indeed, if Biden simply intends to roll back the clock to the days of the Obama administration – where the president affirms his support for the two-state solution but uses no actual pressure against Israel to achieve it – we can probably expect basically the same results.

It wouldn’t be a surprising outcome; in Washington, D.C., both Republicans and Democrats have long believed that they have little political space to offer an alternative to the status quo on Middle East policy. A good example of this can be found in the memoir of former Obama administration Deputy National Security Advisor Ben Rhodes. After a meeting with Palestinian President Mahmoud Abbas and President Obama, Rhodes asked Obama how he’d like to summarize the meeting in the official statement.

“Here’s how you should read it out,” Obama said, and then said something so ridiculous that Rhodes knew immediately it was a joke: “I’ve decided to be a one-term president. I’m going to support the Palestinian bid at the United Nations.”

Obama’s reply reflected his fear of sticking his neck out for the Palestinian cause, in Rhodes words, his knowledge that “despite Netanyahu’s intransigence, he would always side with Israel when push came to shove.” And the reason behind it, as far as Rhodes was concerned, was that in Obama’s view, had he supported the Palestinian Authority’s bid for statehood at the United Nations, he wouldn’t have been able to win a second term in office.

But there are signs that Americans in general and Democrats in particular are increasingly supportive of using the U.S. government’s leverage to push the Israeli government to make peace. One poll from 2018 found that 40% of Americans and 56% of Democrats support imposing sanctions on Israel if it continues to expand its settlements in the West Bank.

While most Democrats in Congress do not support imposing any type of sanctions on Israel, the newest crop of elected Democrats includes several who support a more adversarial stance. New York’s Jamaal Bowman, who recently defeated long-time congressman Elliot Engel in a Democratic primary, declared himself to be proudly pro-Israel, but also made a point to talk about where he differed with Engel.

“One stark contrast between myself and Congressman Engel is I’ve been critical of occupation, annexation, and detaining Palestinian children – where Congressman Engel has not. And it doesn’t mean that, you know, I’m not pro-Israel,” Bowman told City & State New York in August.

It is unusual for a challenger to defeat a Democratic incumbent running to their left on Israel-Palestine issues, but that’s actually not even the only race where it happened this year. In St. Louis, Cori Bush defeated long-time incumbent Lacy Clay. Unlike Bowman, Bush has expressed support of BDS.

It’s clear that the Democratic coalition is shifting to the left on Israel-Palestine issues. The days when the Democratic Party has viewed unconditional aid to Israel as sacrosanct and was content with doing little but voicing rhetorical support for the two-state solution may slowly be drawing to a close.

It may or may not happen during a Biden presidency, but no matter what the former vice president’s platform says, the Democratic Party’s base is increasingly demanding a more balanced policy towards the Israeli-Palestinian conflict, and it’s only a matter of time until politicians catch up.

Biden has always sided with Israel. He will be the last Democratic leader to do so.