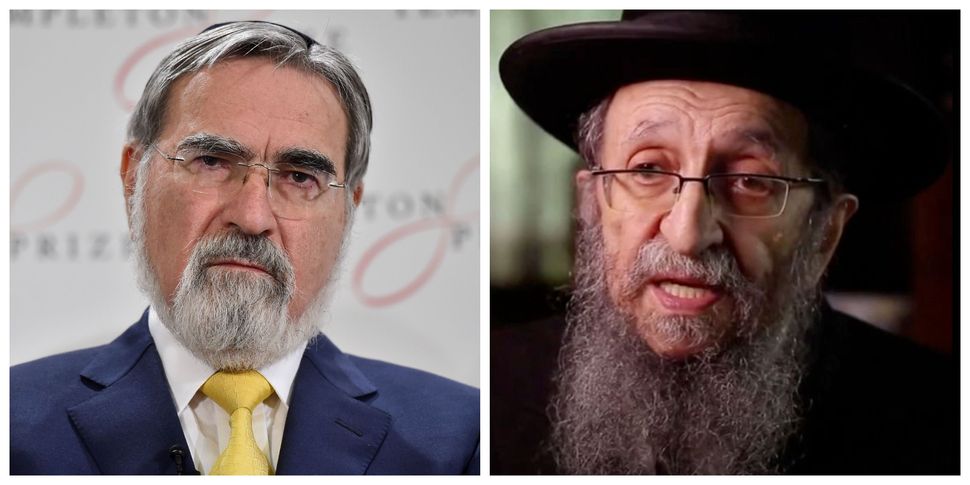 Presidential campaigns, especially in the age of President Trump, tend to dominate the conversation. Everyone seems to have an opinion on the election, on who they will – and who everyone else should – be voting for. But there is a specific subset of Jews who are forbidden by popular decree from voicing their opinions on this matter: members of haredi rabbinic leadership.

This the view of former chief rabbi of Britain, Rabbi Jonathan Sacks, who recently told the Jewish Telegraphic Agency that American Jewish rabbis are making a big mistake in voicing their opinions about President Trump. “I’m afraid American Jewry is making a big, big, big mistake,” he said. “This is not a small thing. It’s a very, very big thing.”

His comments were met by much approval on social media, where apparently everyone else is qualified to opine on what is right and what is wrong in the political sphere, so long as you aren’t, say, one of the senior-most members of a prestigious Rabbinic council, like the Agudath Israel’s Council of Torah Sages. If, however, like Rabbi Shmuel Kamenetsky, you are such an august person, and you dare to voice your opinion like every other person does on social media, you will be soundly derided for “breaking tradition.”

It’s exactly backwards: Why should any opinion columnist — such as this one, for example — be invited to voice his or her opinion, while a rabbi, especially one as prestigious as Rabbi Shmuel Kamenetsky, who has been directing and advising thousands of students at one of the world’s foremost educational institutions for nearly 70 years now, and whose counsel is in demand far beyond that, is told that he must remain silent?

We are told that young Othodox and haredi Jews don’t want their spiritual leaders getting into politics. But if that is so, why is it so threatening when a rabbi expresses an opinion? What makes is such “an absolute and total outrage,” as Rabbi Sacks put it?

“It’s one of the greatest things Judaism ever taught the world: Don’t mix religion and politics,” Rabbi Sacks told JTA.

That is ridiculous. Of course, we want to hear our rabbinic leadership’s opinions on who we should vote for. Nobody has their finger more directly on the pulse of the needs of the haredi Jewish community than our leaders. They are the ones we turn to for guidance for all sorts of things, from answers to our halakhic queries to help making wise life choices.

And there is a good reason for that. Since Sinai, there is nary a thing about how we live our lives that is not guided by the wisdom of the Torah. It is for that very reason that the section of the Code of Jewish Law, the Shulchan Aruch, which contains the laws of daily living, is called “Orach Chaim” – the way of life.

Because that is what it is for us. There is no separating out any sphere of life from our religious way of being in the world. And that includes politics.

Which is why it’s not a new thing for rabbis to involve themselves in politics, despite Sacks’s insistence that disengagement is a fundamental Jewish value. For example, Rabbi Meier Shapiro, founder of the Daf HaYomi, served as a parliamentarian in the Polish Sejm from 1922 -1928. Rabbi Samson Rafael Hirsch actively lobbied for Jewish interests, including for the passage of a law that would allow his Orthodox congregation autonomy from the controlling Reform movement.

They owed that much to their followers. And the same is true of today’s leadership.

You can see this guiding principle in Rabbi Kamenetsky’s endorsement of the President. He did not direct his followers to vote for Trump because of his position on marginal tax rates. He did not weigh in on the question of whether the country should grant citizenship or legalization to dreamers.

He made clear that his endorsement was all about what he viewed as best for Jews in this moment. The left in this country has shown us that they are ready to use the full power of the government to decide for us what sort of religious practices are legitimate and which illegitimate. It really is worrisome to those of us who are devoutly religious that, as Rabbi Kamenetsky said of the modern political left, “religion and religious institutions are their enemy.”

His statement had nothing to do with Trump being a Republican or a Democrat, but rather with what is in our interest as Jews.

The real objection here is not to the idea of a rabbi voicing his opinion, but rather, the content of the specific opinion being expressed. And I can’t help but wonder if the reason it’s so threatening when rabbis voice these particular political views is the very fact that they command so much respect, that they have such a great “platform” to promote these views — a platform so much broader than anything their opponents could hope to achieve.