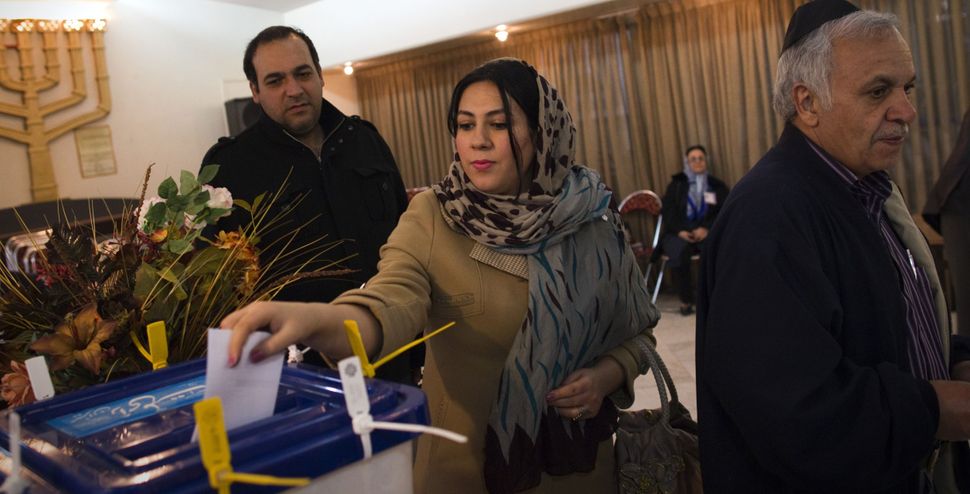 As the presidential election draws nearer, American Jews, like all Americans, are making their choice about who to vote for. By and large, American Jews are Democrats. But there are pockets in the community where support for President Trump is not just strong but effusive.

My own community, Iranian American Jews, is one such pocket of Jewish life.

The Iranian-American Jewish community has elevated President Trump into a messianic figure. There is no polling data on this small community of less than 100,000 people, but as a member of the community, I have seen and discussed Trump support with dozens of my fellow Iranian-Americans, both online and in person. I have found that while Trump support is strongest among the older generation, even the generations of younger Iranian Jews born in America tend to be avid Trump supporters.

Their support dismays me, for it is extremely dangerous.

This is not to say I can’t understand it, though. There are historical reasons Iranian Jews came to support the Republican Party. After centuries of abject poverty and religious persecution, the Jews of Iran got their big break under the Pahlavi Dynasty (1925-1979). Iran was one of the fastest modernization projects in the world, and experienced 20% annual increases to its gross national product.

Along with Iran’s economic modernization, the religious, political, and social conditions of the Jews improved fundamentally, and they came to associate the last Shah (which means king in Iran), Mohammad Reza Pahlavi, with these radical improvements to their fate.

They were not wrong. In 1977, when the Shah’s government was destabilized by the stagnation of oil prices, his declining health, and a democratic movement that was controlled by a network of religious organizations, the democratic revolution gave way to clerical despotism.

Iranian Jews blamed two culprits for the tragic collapse of their home: The first was the Ayatollah Ruhollah Khomeini, the head cleric who imposed a reign of religious terror that continues to this day.

But Iranian Jews also blamed President Jimmy Carter. Carter’s human rights policies gave life to a dormant democratic movement that was dominated by Khomeini, whose true intentions were obscured by the fact that his books had been banned in Iran. His rants against women’s rights and land reform had gone unnoticed, and he was ironically able to assume the mantle of a Democrat, a progressive cleric reformer fighting against despotism and colonialism.

Khomeini’s rise was supported by secular intellectuals like Jalal Al-Ahmad and even French postmodernist philosopher Michel Foucault And unlike Republican President Richard Nixon, Carter had put pressure on the Shah to democratize during an already destabilizing oil crisis. The Carter administration’s failure to grasp the precarious situation and provide clear support to the Shah is seen by Iranian Jews as a major contributing cause of the 1979 Iranian Revolution which resulted in the mass exodus of Iranian Jews to the USA and Israel.

To Iranian Jews, the Iranian people had been duped by a fundamentalist Muslim cleric who had posed as a leftist reformer. And to this day, Iranian Jews remain wary of any populist leader, religious or secular, who appeals to the left. In any such figure, they see the echoes of the Islamist posing as a progressive figure, and the lurking fear of curtailed human rights and liberty that has lasted for the past 40 years.

But the affinity Iranian Jews have for Republicans was truly solidified when their exodus from Iran coincided with the rise of Ronald Reagan, who understood the essence of Carter’s mistake. Reagan’s view perfectly reflected the pro-Shah sentiment of the Iranian Jewish community, which Iranian Jews looked back to longingly as the most prosperous time in centuries. As Reagan put it in the 1980 Presidential Debate, “Because [the Shah] did not meet exactly our standards of human rights, even though they were an ally of ours, instead of trying patiently to persuade them to change their ways, we have aided in a revolutionary overthrow which results in totalitarianism instead for those people.”

Of course, life under the Shah could also be autocratic, and had Iran reformed before Carter’s presidency, there may not have been the need for a revolution. But for Iranian Jews, the right side to be on was clear, and Republicans were on it.

It also helped that under Reagan, Iranian-American Jews saw the third longest peacetime economic expansion in U.S. history. And Reagan appealed to family values and conservative morality, which meshed perfectly with the traditional and religious values of the Iranian Jewish community.

To a community fresh to America, the stark contrast between Carter’s perceived failures and Reagan’s successes could not have been stronger. Republicans had won the hearts of Iranian American Jews.

And then came Trump.

In some ways, Trump is an unlikely figure for Iranian Jews to admire. He is no bastion of conservative family values, and his presidency has been one of chaos rather than peace and prosperity. Moreover, he has presided over a startling rise in antisemitism, one that is inextricably linked to his presidency.

It’s true that Trump’s conspiracy theories don’t directly involve Jews. But Jews always end up somehow implicated, as when Trump tweeted unfounded conspiracies about George Soros, or referring to “globalists” in his UN speech. Trump has also congratulated Marjorie Taylor Greene, who shared an anti-Semitic video claiming that “Zionist supremacists” are conspiring to flood Europe with migrants to displace the white Europeans. And the President’s rhetoric has given rise to more obvious antisemitic rhetoric in his party, as when Mary Ann Mendoza had to be pulled from the Republican National convention at the last minute for references to “The Protocols of the Elders of Zion.”

And it’s undeniably spilled out into the streets. Trump has presided over the most violent epoch of antisemitic violence in U.S. history.

So how could Iranian Jews, who know how devastating antisemitism can be, support such a man?

To understand how Iranian-American Jews came to support Trump, you have to understand the Iranian Jewish relationship with Israel. To begin with, Iranian Jews tend to be fairly traditional in their religiosity, and it goes without saying that Israel plays a prominent role in Judaism.

But beyond that, Israel currently has the largest population of Iranian Jews in the world. Israel granted Iranian Jews citizenship during their time of crisis in 1979. So it’s no surprise that they would be defensive of the country.

Right wing media, especially Fox News, has long sought to paint Democrats as anti-Israel and seize the pro-Israel mantel for itself and its political avatars. But even if Fox News hadn’t been so harsh on President Obama, and even if a series of missteps early in Obama’s presidency hadn’t led to an acrimonious relationship with right-wing Israeli Prime Minister Benjamin Netanyahu, the appearance of a deal which seemed to legitimize the Iranian regime was too much to stomach.

The Iran Deal was the kiss of death for the Democrats when it came to Iranian Jews. And then came Trump.

And then, in 2016, Trump stood in front of a tenuous AIPAC crowd where some rabbis had staged a walkout and hit all the right notes, from the Iran deal to the UN’s anti-Israel obsession to terrorism, even mentioning that his daughter had Jewish children. With the words “We will move the embassy to the eternal capital of Israel, Jerusalem” Trump clinched the speech and left with a standing ovation. And if there was any doubt this man would be an unshakable supporter of Israel, it was erased when Trump delivered on his promise and moved the U.S. embassy in Israel from Tel Aviv to Jerusalem, recognized the Golan Heights, and — most importantly of all — withdrew the U.S. from the Iran Deal.

As far as the Iranian Jewish community was concerned, after delivering on Israel, exiting the Iran deal, and killing the commander of Quds Force, Qasem Soleimani, Trump had proven himself as a lover of the Jewish people and a great president.

As for his reckless embrace of conspiracy theories for political gain, which is laying the groundwork for a catastrophic future for the Jewish people in the long run, this abstract concept simply cannot compare to the concrete moves they view as beneficial to the Jewish people.

It’s a big mistake. Iranian Jews have flourished in America and should not take for granted the importance of a thoughtful and measured president, even one whose views they don’t share. Trump is recklessly dismantling the institutions that all Americans rely on for stability.

While Iranian Jews see echoes of Khomeini on the left, they would do well to see the same kind of repressive authoritarianism taking hold on the right.

Their reasons for mistrusting the left may be understandable. But my hope for my community is that they will learn to have a bit more skepticism for the devastating antisemitism grabbing a foothold on what is becoming the mainstream right.

Philip Mehdipour is an entrepreneur and freelance writer based out of Los Angeles, California.