My fellow Jews: Getting rid of Trump is a religious imperative 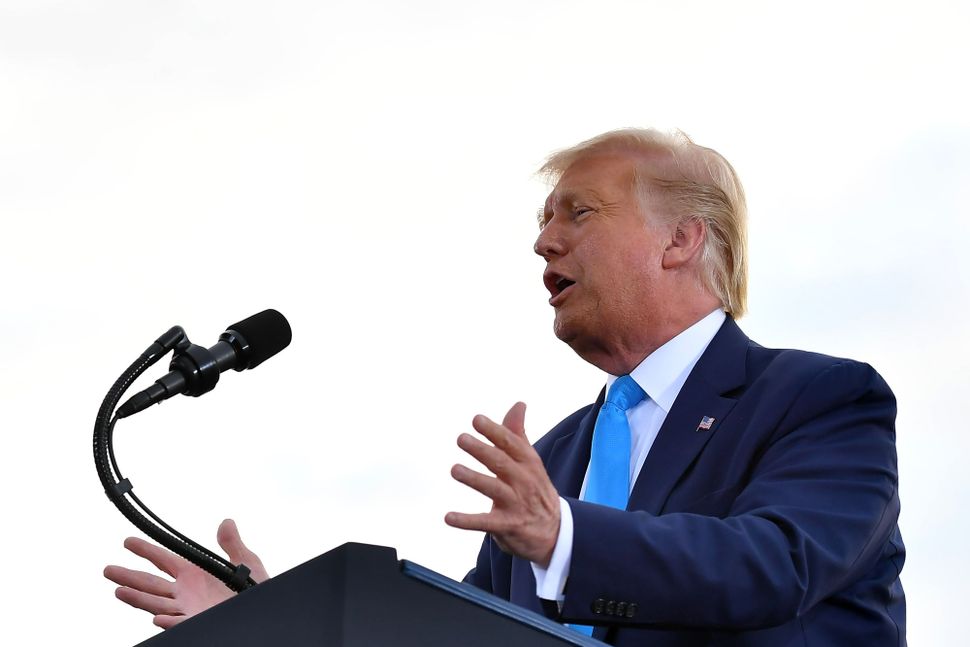 While it’s certainly understandable why religious leaders wouldn’t want to venture into the world of hyper-partisan politics and I appreciate the sentiment, this isn’t an ordinary time and most certainly isn’t an ordinary president. When you compound this election’s coincidence with the Black Lives Matter movement for racial justice, it makes for a profound moment where neutrality isn’t an option.

Many of the Jews who have endorsed Trump have done so because they see him as a friend to Israel. But this is shortsighted. Moving the embassy, recognizing sovereignty of the Golan Heights, and authoring a one-sided “peace plan” hasn’t brought the elusive two-state solution any closer, which is the only way to establish self-determination for both people and ensure Israel’s Jewish majority and democracy. Nor have these moves made Israel more secure. These are symbolic — and at what cost?

It isn’t just Trump’s propagation of long-standing anti-Semitic tropes or that he described white supremacists as “very fine people.” Trump will never win over most Jewish voters because he doesn’t share our values, and we connect what he says and does to our history.

When Trump tried to ban people from Muslim countries, we remembered our expulsions and exile.

When Trump blamed immigrants for crime and economic hardship, we remembered Jews being singled out and scapegoated.

When Trump refers to COVID-19 as the “Chinese Virus,” we remember Jews being attributed to diseases for centuries.

This shows up in the data. The Democratic Party’s allotment of Jewish votes went from 66% in pre-Trump 2014 to 72% in 2016, to 79% in 2018. Trump’s 2016 rise correlated with an exponential increase in hate crimes against Jews and other minority groups. Since 2016, anti-Semitic incidents have increased over 66%, leading to the most annual anti-Semitic incidents in nearly 50 years, including the deadliest anti-Semitic attack in U.S. history, the shooting at Pittsburgh’s Tree of Life Synagogue.

Our Jewish faith is founded upon the antithesis of that. We’re commanded to “be a people whose values are rooted in justice and righteousness” (Genesis18:19) and instructed to “give justice to the weak; maintain the right of the afflicted and the destitute” (Psalms 82:3). The Torah repeatedly tells us to “love the stranger, for you were strangers in the land of Egypt” (Deuteronomy 10:19), which is mentioned more than the requirements to keep kosher or observe Shabbat.

The rabbis believed that Jews are distinguished by three characteristics: compassion, modesty, and benevolence. These beliefs and traits are the opposite of Donald Trump. Trump’s fought harder to keep Confederate monuments than to defeat the Coronavirus.

Our Jewish values should give us no choice but to condemn Trump. And they demand that we join the struggle for racial justice. As a diverse community that includes Black people, it’s our basic responsibility to stand up explicitly for members of our faith under attack, but also for the oppressed, whoever or wherever they may be. We should stand in solidarity with the Black community without preconditions like requiring ideological symmetry or expecting a personal invitation.

Recently, our communities have been pinned against each other, entangled in disagreements over inflammatory statements widely condemned and old platforms that have been removed, rather than uniting to defeat our common enemies of white supremacy and hatred of all forms. While those subjects do warrant further conversations, it’s not the time for grudges or the celebration of efforts long ago; it’s time to display those values, not just with pleasant statements of support, but also with actions as key allies of the racial justice movement. It’s time to create a new shared history.

That starts with beating the symptom of Donald Trump — which is not just political for us Jews. It’s religious.

Ben Gould has served as the National Field Director for the Sister District Project and has worked on political campaigns for President Obama, Secretary of State Hillary Clinton, Congresswoman Jan Schakowsky, and Chicago Mayor Lori Lightfoot. Ben is a graduate of the Anti-Defamation League’s Glass Leadership Institute and serves on the Israel Policy Forum’s Chicago Atid Steering Committee.

My fellow Jews: Getting rid of Trump is a religious imperative