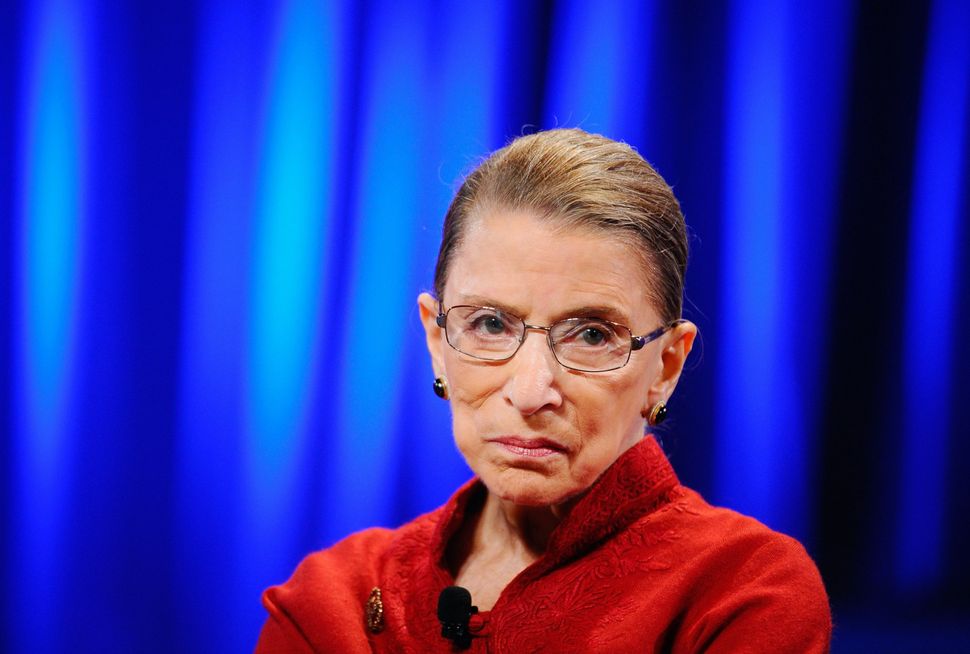 The passing of Supreme Court Justice Ruth Bader Ginsburg leaves a hole in the heart and soul of America that feels, for the moment at least, so vast that the angels themselves could not fill it. What’s worse, it is a hole big enough for the devil to walk through.

Her departure, just as the Jewish new year was arriving, adds one last painful loss to a year of too many sorrows, and reminds us that worse may lie ahead. It recalls a wag’s new year’s greeting, telling of a passerby who hails a friend, “Vus machst a Yid?” — How goes it, fellow Jew? And the friend replies, “Thank God, better than next year.”

Ginsburg’s passing will be felt as multiple losses in one. America the nation has lost a trailblazer in jurisprudence and a giant in the cause of human rights. Americans as individuals, along with millions of others around the globe, have lost a beacon of hope that our voices can be heard, that our actions can make the world better.

But there is a third layer of loss, more immediate and more threatening than the others. It unfolds before our eyes while her blood is still fresh and her family sits in mourning. Donald Trump and Mitch McConnell openly plan a swift campaign to fill Ginsburg’s Supreme Court seat with another hard-right ideologue, giving so-called movement conservatives a six-to-three majority that could last a generation. A handful of Senate Republicans threaten to oppose such rank duplicity, but even they promise to delay only until after Election Day. That would still leave eight weeks for a Trump nominee to be confirmed and sworn in before a new Senate is seated.

What happens after that is easy to guess: The warnings have been sounded loudly for years. Reproductive rights will be undone by a six-three vote, followed by accessible health care and what’s left of voting rights protections. Generations of hard-fought rights and freedoms will face rollbacks, from freedom of press, assembly and minority religious expression to the rights of workers, immigrants, defendants and prisoners, small investors and consumers. And we haven’t yet mentioned the fate of American democracy, nor the future of the planet in the face of climate change.

Nothing rings more bitter in our current situation than the fact that all this was foretold in great precision, and all could have been avoided. Ginsburg’s death, as heartbreaking as it is, need not have constituted a crisis for American liberalism and democratic norms. That it has come to this is in large part a result of her own decisions.

Ginsburg came under some pressure to retire in 2010, at age 77, in order to let then-President Obama appoint a liberal successor before he had to face a tough reelection fight in 2012 — a fight that might put the eventual choice in Republican hands. She declined, insisting in interviews that she was as capable as ever. Besides, she relied on her work to help her cope with the death a year earlier of her husband, her lifelong love and best friend. As it happened, Obama was reelected and she was vindicated. ­­ The pressure resumed in 2013, at a moment that Democrats feared was Obama’s last chance to fill her seat with a liberal before likely losing the Senate in the 2014 midterm election. Ginsburg was now 80 and a two-time cancer survivor. Again she swatted away the pressure. She famously told the Associated Press in July that she could “still do the job full-steam” and wasn’t going anywhere.

She was at the height of her power and influence. She took pride in her historic stature as leader of the court’s fighting liberal wing. She plainly reveled in her pop-star celebrity, and just as plainly resented seeing her own death made into a political guessing game.

She insisted repeatedly, and ever more unrealistically, that her retirement from the job she loved need not be scheduled around the vagaries of presidential elections. “There will be a president after this one,” she told The New York Times in August 2013, “and I’m hopeful that that president will be a fine one.” She was said to be hoping to see her successor chosen by Hillary Clinton as the first woman president. This time she guessed wrong.

Tradition and custom enjoin us not to speak ill of the dead, not while the wound is still fresh and especially not when the departed was a revered and beloved public figure. At the same time, history and prudence admonish us, in a time of national crisis, to probe honestly and impassively for the cause of the trouble, regardless of where the truth takes us.

The two principles, each an elementary standard of common decency, do not usually collide head-on. It’s rare to see the death of an esteemed public figure become in and of itself a national crisis, much less a crisis resulting directly from long-ago actions of the deceased.

The Talmud teaches us to judge our fellows “toward the scale of leniency” — to put our thumb on the scale, so to speak, when summing up a life. Ginsburg spent her life fighting battle after battle for social justice, sometimes winning, sometimes losing, but by the end transforming and bettering America as few have done in recent years.

Her one great mistake was to overestimate her vitality and underestimate the national abyss that lay ahead. In so miscalculating she let her own needs, immediate and urgent, supersede a theoretical future threat that might unmake her legacy, undo the good she had wrought for Americans and threaten the future of American democracy. Her miscalculation now seems likely to become a tragedy of near-Shakespearean proportions.