AOC abandoned peace to satisfy the purity demands of the left 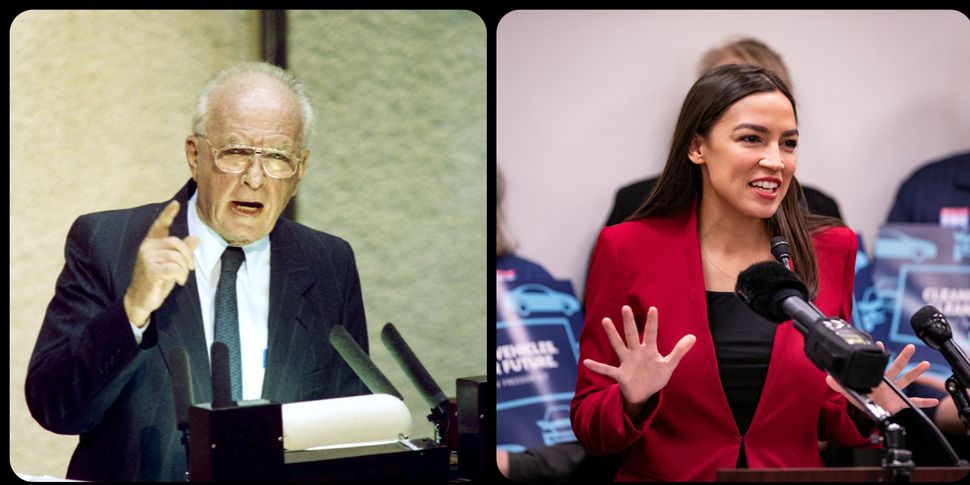 Last week, the pro-peace organization Americans for Peace Now proudly announced that Bronx Congresswoman Alexandria Ocasio-Cortez, the young and charismatic avatar of the new American left, would participate in an event honoring Yitzhak Rabin, who was assassinated 25 years ago for making peace with the Palestinians. But their announcement resulted in a barrage of online criticism from far-left activists, who cited Rabin’s history before the Oslo peace agreement, specifically the fact that as a general in the Israeli army, he gave an order to “break the bones” of Palestinians at the start of the First Intifada. In response to this criticism, AOC promptly withdrew from the event, claiming it had been misrepresented to her, and that she was “taking a look into this now.”

Hey there – this event and my involvement was presented to my team differently from how it’s now being promoted.

Thanks for pointing it out. Taking a look into this now.

The fact that a few random Twitter activists could change her mind by pointing out the obvious — that besides shaking hands with Arafat, Rabin was also a general with blood on his hands — raises a number of questions, not least of which is, did the Congresswoman not know about Rabin’s past beforehand? Was it only upon seeing the vehement reactions to her participation in the Peace Now event that she realized that Rabin, and the Israeli-Palestinian conflict, are controversial issues?

Yes, Rabin called to break Palestinian bones. He also did far worse: In 1948, he expelled Palestinians from Lydda and Ramleh. There’s no way to undo that history. Rabin himself acknowledged that, twenty-five years before the Twitter activists could, in a speech to Congress. “I, Military I.D. Number 30743, retired general in the Israel Defense Forces in the past, consider myself to be a soldier in the army of peace today,” Rabin said.

It wasn’t an exercise in rhetoric; even though Rabin wore a suit when he said these words, mentally, he had never taken off his uniform. Embedded in that IDF ID were all his previous actions, legitimate and not. Saying it out loud was a confession and a reckoning with his past.

But in addition to all that he did in the IDF, Rabin, like no other Prime Minister before him, did the unthinkable: first, by signing the Oslo Accords, faulty as they were, and second, by bucking the convention that one needs a Jewish majority to make historical changes; he pushed for the agreement relying on Arad-led parties.

Rabin risked everything for the chance of peace: going into a shaky minority government, ripping apart Israeli society, having the right-wing calling him a traitor with rabbis conducting rituals to usher his untimely death, all while grinding his teeth against brutal suicide bombings.

Rabin also understood the brutality and racism of Israel’s past. At a rally in Nazareth in 1992, he said, “We have been in power for twenty-nine years and we are to blame for the discrimination. I apologize and I intend to act to eradicate it.”

Rabin broke with his past. And for that reason, he was assassinated.

He advocated for peace and normalcy while having doubts about its plausibility, while being a hardcore Zionist, while being agnostic on the question of Palestinian nationality. It says a lot about the stakes of conflict that he was assassinated for an agreement so many criticize for being so flawed. Yet, in Israel and Palestine, even a small step can create earthquakes.

AOC should have showed up to honor this legacy. Indeed, just three days before AOC caved to the online bullying of Twitter activists, Saeb Erakat, secretary general of PLO, did just that, sharing a heartfelt tribute to Rabin on that same medium, noting how the Prime Minister was “assassinated for trying to make peace on the basis of two States 1967 borders.”

In 1992, Rabin was re-elected as prime minister on a platform embracing the Israeli–Palestinian peace process. He signed several historic agreements with the Palestinian leadership as part of the Oslo Accords. In 1994, Rabin won the Nobel Peace Prize together with long-time

Instead of following the lead of the Palestinian leadership, AOC chose to meet the purity demands of the far left, chose to cleanse herself of the stain of compromise for peace by not showing up. She chose to hang Peace Now out to dry — an organization that’s been at the forefront of the fight to end the occupation for over four decades.

In abandoning an organization that’s on the ground seeking peace, AOC imposed the purity demands of the American left on those most impacted by the conflict, most in need of a solution, and thus most cognizant of the need for compromise. It is we who live in Israel and Palestine who should determine Rabin’s legacy, who are struggling with it, and with our own role in the conflict.

In addition to her ignorance, AOC’s actions show a deep lack of solidarity; where she had an opportunity to strengthen the Israeli left, she chose instead to push Israelis who are already despondent to apathy, which will ultimately hurt those already marginalized and attacked by Israel’s right-wing government.

It was a big mistake. Commemorating Rabin’s struggle for peace doesn’t mean erasing the Palestinian struggle and suffering; canceling your appearance for political points certainly does.

While liberal Zionism has fallen out of vogue in the U.S. left, there are still real people in Israel and Palestine who are working for peace against all odds. Forsaking them is a betrayal of leftists values.

AOC abandoned peace to satisfy the purity demands of the left