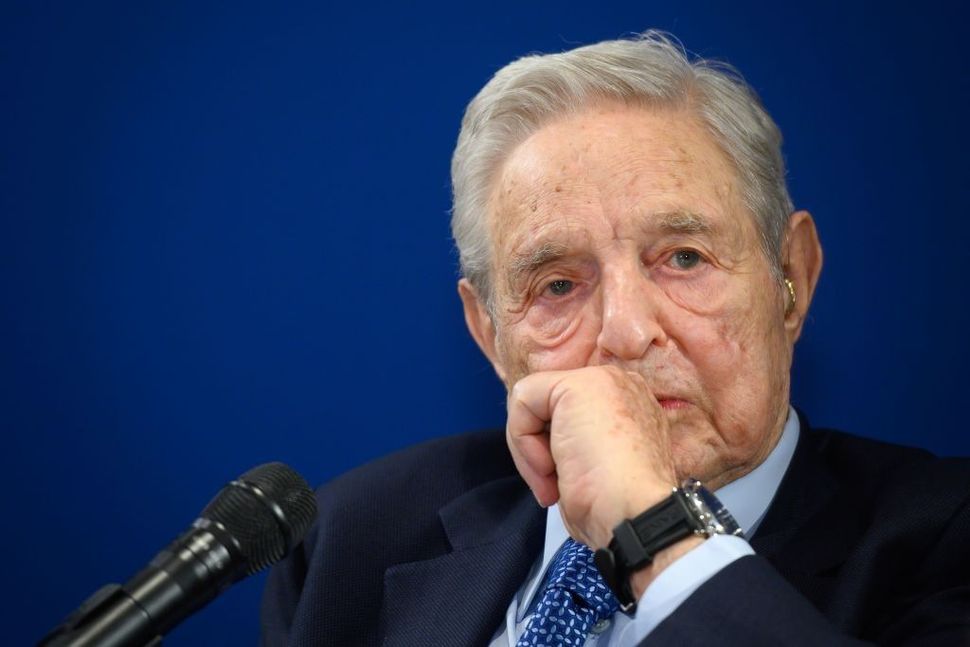 Eric Early, a Republican candidate for Congress in California, Tweeted this weekend about the philanthropist George Soros, a Holocaust survivor — who Early called “a Nazi sympathizer” and “a danger to our nation.”

As the Forward, the Anti-Defamation League, and other sources have all ably documented, there is no truth behind the spurious claim that Soros is a Nazi sympathizer; in truth, at 14 he had to hide to survive the Nazi occupation of Hungary. But this particular conspiracy theory has been percolating on the far-right for years now, so Early was hardly blazing a new path of depravity.

Except that Early is Jewish — just like Rep. Adam Schiff, the incumbent Democrat he is challenging, and was trying to malign by linking him to Soros. That’s right: A Jewish Congressional candidate is spreading openly antisemitic conspiracy theories that the ADL says have “the effect of mainstreaming antisemitic tropes and giving support, however unwitting, to bona fide antisemites and extremists who disseminate these ideas knowingly and with malice.”

The fact that Early is himself Jewish does not give him a moral license to engage in classical antisemitic tropes against Schiff and Soros. But the danger is that Early’s Jewish identity might give non-Jews a “kosher seal of approval” to spread this kind of pernicious antisemitism against Soros, Schiff, or others in our community. If we don’t want that to happen, then we need to call this rhetoric out for what it is.

Naturally, Early, a California attorney and Republican Party activist who was raised in Long Island by first-generation Jewish American parents who fled Nazism in Austria and Poland in the 1930’s, has resolutely denied any wrongdoing, saying that “there’s nothing antisemitic at all” about claiming Soros is a Nazi. (The ADL, however, recently released a report finding that George Soros conspiracy theories are the leading source of online antisemitism directed against Jewish members of Congress.)

But that’s precisely the point of the sort of language Early is deploying here. If Soros is a Nazi sympathizer, then he has removed himself from the ranks of the Jewish people. One can attack him all one wants without being antisemitic, because he doesn’t simply have the wrong politics he no longer qualifies as a Jew at all.

Unfortunately, this approach is not unique to Early, but part of a growing trend of right-wing Jews attacking the Jewish identities of Jews who lean left. You can find numerous examples: the right-leaning Jewish Press calling The Forward a “putatively Jewish publication” last year, or Israeli newspaper Arutz Sheva writing during the 2016 presidential primaries that “Bernie Sanders is not a Jew” because “his first and foremost allegiance has always been to the left at the expense of the Jews.”

Similarly, right-wing Jewish pundit Ben Shapiro wrote last year during the presidential primary campaign that Senator Sanders may have “Jewish birth” but is now “an outspoken atheist,” and so criticisms of him can never shade over into antisemitism. (If being an “outspoken atheist” removes a person from membership in the Jewish community, that would be news to the two-thirds of American Jews who told a major Pew poll on Jewish identity that a person can be fully Jewish without believing in God).

And we would also shrink significantly as a community under Ben Shapiro’s terms, since Pew found the following year that fully 1 in 5 self-identified American Jews do not believe in God.) Shapiro has also written that Jews who voted for Barack Obama – that’s 80% of American Jews in 2008 and 70% in 2012 – are “Jews In Name Only (JINOs).”

And Jonathan Neumann wrote in the New York Post in 2018 that left-leaning Jews have given up Judaism entirely in favor of “a distinct religion, whose adherents, it might be said, have culturally appropriated this ancient faith.” Liel Leibovitz of Tablet advised Jews on the progressive left during the 2016 presidential election that “your religion is progressivism, not Judaism.” (Again, the idea that we have to choose between them would be news to the 56% of American Jews who consider “working for justice and equality” essential to Jewish identity.)

These ideas have become sufficiently mainstream that even non-Jewish right-wingers now feel they have license to say it. On Fox News, the commentator Michelle Malkin claimed that George Soros is funding “the illegal alien lawyers lobby” and then insisted that this could not, by definition, be antisemitic because Soros is “ an atheist who hates religion.”

Rudy Giuliani, the former New York Mayor and stalwart Trump defender, has also insisted that his frequent outbursts against Soros cannot constitute antisemitism, because “Soros is hardly a Jew. I’m more of a Jew than Soros is.” (Giuliani is Catholic.) And U.S. Rep. Louie Gohmert, a Texas Republican and devout Christian, declared on Fox News in 2018 that “George Soros is supposed to be Jewish but you wouldn’t know it from the damage he inflicted on Israel.”

Far too many of these non-Jews get kosher seals of approval from right-wing Jews for their antisemitism and bigotry. When the ADL called on Representative Gohmert to stop spreading rhetoric that “perpetuates antisemitism,” the Congressman trotted out a defense from the right-leaning Zionist Organization of America (ZOA), who said that Gohmert was “essentially correct.” And Arutz Sheva has defended Giuliani by calling him a “life-long dear friend of the Jewish community,” and Soros and Sanders “apostates” who, “if these were times when Torah values defined the Jewish world,” would “have been excommunicated by now.”

Meanwhile, you cannot easily find equivalent rhetoric on the Jewish left denying the Jewish identities of Jews on the right or trying to cast them out of the community entirely. We may call Jews working for the Trump administration like Stephen Miller and Jared Kushner “shande far di goyim,” but that phrasing itself acknowledges that they are, in fact, fully Jewish.

This trend from the Jewish right is noxious and dangerous.

It’s fine to disagree with the politics of other Jews, even harshly and strongly. Disagreements and debate are a major part of what being Jewish is about, going back to the Talmud. But we need to do that without claiming that Jews on the opposite side of the political spectrum are somehow less Jewish, or that they have written themselves out of the Jewish community, or, ridiculously, that Nazi victims are Nazi sympathizers.

There are so many ways to be Jewish. Emily Tamkin, who literally wrote the book on Soros, argues that his left-wing politics are an expression of how he understands his Jewishness, not a repudiation of it. “I was persecuted because I was Jewish,” she quoted him saying. “Therefore, what I want to do is to help other people who find themselves persecuted because of whatever they are.”

The debate over what moral lessons we should learn from Jewish history, and how they should influence our contemporary politics, is an essential one to have. And we need to have it without questioning each other’s Jewishness.