Who is George Soros? And why is he the ‘boogeyman’ of the right? 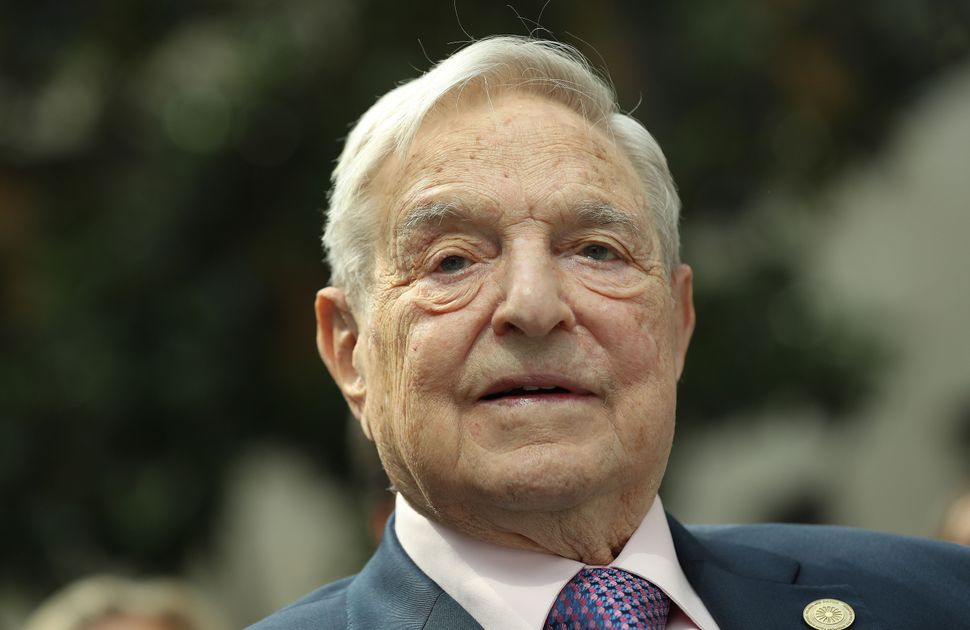 Editor’s note: Almost every day, political figures and commentators on the right accuse George Soros of nefarious behavior. This week, the RNC removed a speaker due to her support for the QAnon conspiracy theory and assertion that George Soros is involved in a supposed Jewish cabal with designs to run the world. For context, the Forward is taking a close look at how Soros became the “boogeyman” of the right.

George Soros is a Jewish, Hungarian-American, billionaire philanthropist who, perhaps more than any other person, has become the main boogeyman that haunts the conspiracy theories of the political right.

For years, right-wing figures have told tall tales about the malicious influence of Soros, supposedly propagated through the work of the Open Society Foundations, his nonprofit network that promotes democratic policies around the world. As of 2017, he had donated $32 billion of his personal fortune to the Foundations, according to its website.

During the Trump era, it has become fashionable for some on the right to assign blame to Soros, 90, for the decline of America, for “paid” protesters, for funding “Antifa,” for manipulating the U.S. government. Tucker Carlson, the Fox News primetime host, has said Soros is “remaking” America. Dozens of GOP candidates for Congress this year invoked the specter of Soros — including one who emerged victorious in her primary after falsely accusing Soros of having been a Nazi. In July, a longtime columnist for the Chicago Tribune wrote that “Soros-funded prosecutors… help release the violent [from jail] on little or no bond.”

Yet none of these theories are really true, and they seem to be born of the antisemitic trope that there is some rich, shadowy Jewish figure who is responsible for the country’s perceived problems. The Anti-Defamation League has warned about antisemitic Soros conspiracies.

Here are some of the internet’s most pressing questions about George Soros — and the true answers. We’ll start at the beginning.

Was Soros a Nazi?

Soros was born in Budapest, Hungary, in 1930 to a secular Jewish family. He survived World War II, and the deportation of half a million Jews, in part by passing as a non-Jew: His father changed the family name from Schwartz to Soros in 1936, amid rising antisemitic sentiment in the country, and the family disguised themselves as Christians during the war.

Yet figures like Marjorie Taylor Greene, the Republican congressional candidate who believes the QAnon conspiracy, have touted the bogus idea that Soros was a Nazi, or aided the Nazis.

In truth, according to Soros biographer Emily Tamkin, Soros once took inventory of the goods of a Jewish home, though he did not participate in the looting of Jewish property. He also once delivered a deportation notice for Budapest’s Judenrat, the Jewish councils forced by the Nazis to arrange the ghettoizing of Jewish residents. However, Soros did not participate in the rounding up or deportation of Jews.

How did George Soros make his money? 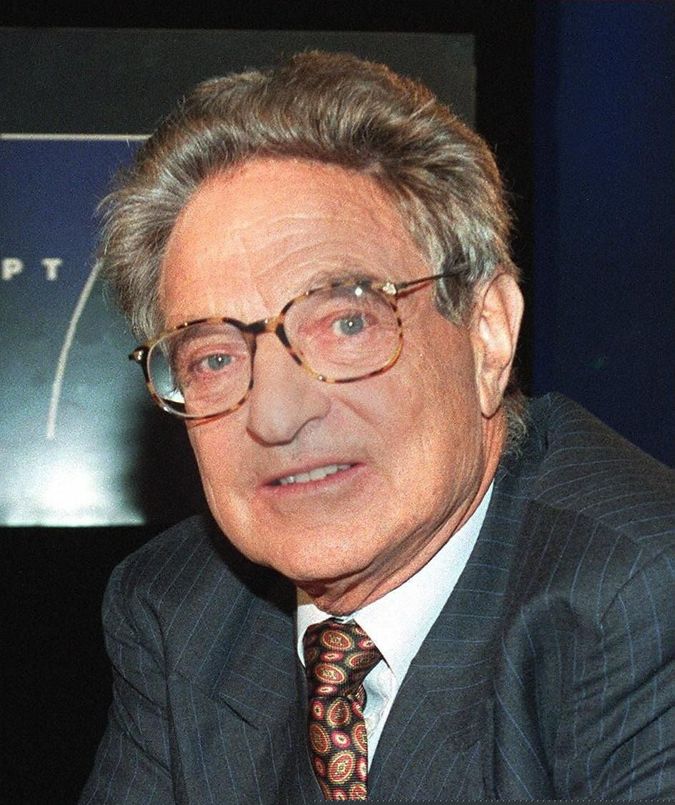 In 1947, Soros moved to London to study economics. He got a job in banking, and in 1969 created a hedge fund. But his enormous fortune — and reputation — were built with a single financial investment move in 1992.

That year, Soros “shorted” the British pound, meaning he bet that the pound’s value would plummet. At the time, due to economic agreements that eventually led to the creation of the euro currency, the pound could only grow to a certain point in value. That meant that if Soros’ bet was wrong, he would only lose so much money. But if the pound devalued — and if it crashed entirely out of the shared currency arrangement — he could make a lot of money. And that’s exactly what happened.

On September 16, 1992 — what would soon be deemed “Black Wednesday” — Soros’ fund began selling off tens of millions of pounds, kickstarting a financial crisis that would lead to the U.K. withdrawing the pound from the currency arrangement. That decision has lasted to this day: Most European countries now use euros, while the U.K. still uses pounds.

Perhaps the most common conspiracy theory about Soros is that he pays protesters in progressive social justice movements. That theory first took on a wide audience in 2014, during the Black Lives Matter protests in Ferguson, Mo. In 2018, President Trump and other Republican politicians accused Soros of paying women who confronted Sen. Jeff Flake during the Supreme Court confirmation hearings of Justice Brett Kavanaugh. Soros has been accused of funding protests in Hungary as well.

Soros, through his Open Society Foundations, funds a grant-making network that frequently provides funding to groups that are involved in various social justice protests. For example, the women who confronted Flake were affiliated with a group that has received money from a Soros-backed grant network.

The Open Society Foundations does not do this funding in the shadows: In July, the organization announced it was funding racial equity organizations to the tune of $220 million in grants — the largest funding effort it has made since it began funding American criminal justice reform in 1994. 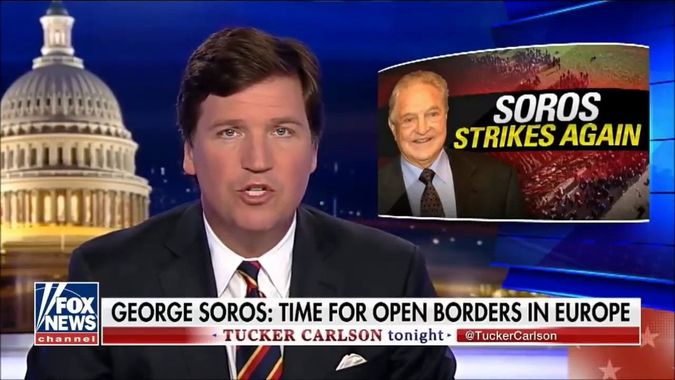 A still from a 2018 episode of Tucker Carlson’s Fox News show. Image by YouTube: Screenshot

Is Soros trying to “remake” America?

In August, Rudy Giuliani, Trump’s personal lawyer, said in an interview on Fox News that Soros is “is intent on destroying our government, for some sick reason of his that goes back to his sick background” — the last bit an apparent reference to the false theory that Soros was a Nazi.

This kind of sentiment is widespread on the right — and speaks to the issues Soros supports.

He focuses on social welfare causes that often are associated with the left: promoting accessible learning, through his founding of the Central European University in Budapest; helping migrants and refugees,; funding efforts to uphold democratic governments and institutions. 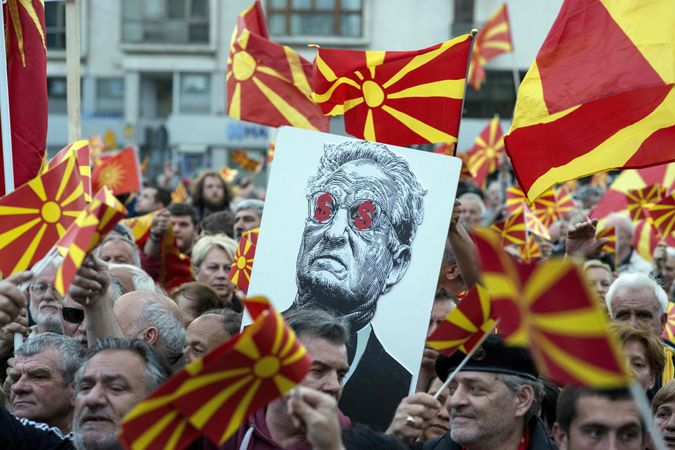 A poster of Soros will dollar signs in his eyes, held up at a protest against Albanian being made the second official language of Macedonia, in 2017. Image by Getty

In turn, Hungary’s autocratic leader Viktor Orban has targeted the university; Republican media has falsely blamed Soros for the migrant caravans to the U.S. southern border; and this summer the number of negative tweets about him exploded, from about 20,000 on May 26 to half a million on May 30, after protests began over the police killing of George Floyd in Minneapolis.

So, in a sense, Soros is bent on remaking society — whether you see the initiatives he chooses to fund as a benefit or a detriment is a matter of perspective. According to Tamkin, the author of “The Influence of Soros,” his influence has been positive.

“The biggest legacy is the people who were the beneficiaries of the money,” she told JTA in June. “All of the people who had scholarships that they wouldn’t have been able to have, who went to a university that wouldn’t have existed without him; the cultural productions that never would have been put on; the literary prizes that were awarded in Sarajevo during the war so that people could still feel like they were humans. To me, it’s these individual experiences that will be used by people to demand fuller participation in society.”

Who is George Soros? And why is he the ‘boogeyman’ of the right?