The peace process is hospitalized in Jerusalem with Covid 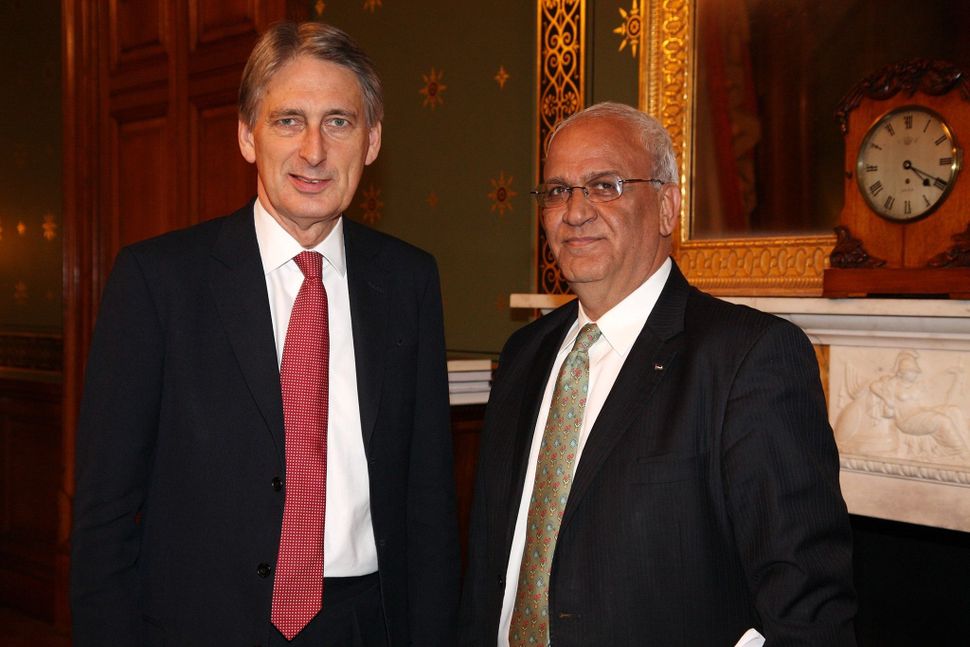 I come not to bury Saeb Erekat nor to praise him, but merely to reflect on what the possibility of him dying would say about the conflict he has toiled within for decades. Erekat, the veteran Palestinian negotiator, is hospitalized in Jerusalem with Covid-19, and his prognosis is grim. Eulogies are already being written, and no doubt some Zionists will celebrate the death of a longtime antagonist.

But if in fact Erekat does leave the stage, he will take with him the assumptions, deceptions, suffering, and rage of a conflict whose basic terms are being revised before our eyes. Erekat’s belabored breaths spell the end of one era, and the uncertain beginnings of the next. For a political leader to die with no successors in sight indicates that he and his legacy share the same mortal peril.

Erekat was born in Abu Dis, a Palestinian village bordering Jerusalem, and educated in San Francisco and England. He returned to the West Bank as a kind of public intellectual, lecturing at a university in Nablus and writing for Al-Quds, the most popular Palestinian newspaper. He migrated into politics, becoming a Fatah apparatchik and growing close to Yasser Arafat, then the head of the PLO.

He served as the chief negotiator for the Oslo Accords in the 1990s, and pretty much ever since. The last years saw Erekat in a bit of an eclipse, crowded out by the internal power struggles within a sclerotic and decaying Fatah party and developments in the region that have made it seem as if his negotiations might as well have transpired on Mars.

Before his Covid diagnosis, Erekat was for having taken on a role as a visiting fellow at Harvard’s Kennedy School. That occasioned a rough draft of his legacy, with some hailing him as a man of peace working in a world not ready for it — and others as complicit in the dashed hopes and broken bodies that Oslo left behind, most notably the horrors of the Second Intifada.

Erekat negotiated with Israelis but supported the BDS movement that seeks Israel’s destruction. He pitched himself as a reasonable man, a diplomat of the old school, but his wagon was hitched to Arafat’s bloody and corrupt reign.

He presented himself as a truth-telling man of peace, but also trafficked in the slander that Israeli troops committed a massacre in Jenin. In this he represented so much of the movement he spoke for: persistent, self-sabotaging, always unsure of whether it would settle for something or hold out for everything. That doubt always left no doubt that there would be no peace.

Erekat was a man who ran for a long time, only to realize that he was running on a treadmill. He was a keeper of the status quo, only to watch it crumble around him. It doesn’t make him a hero or a villain, but it does make him a failure, although he is hardly the only one in a conflict that has spanned the better part of a century.

He was at the center of Peace Process Inc., an industry that has gone the way of stagecoach manufacturing, although it is still collecting cable-news royalties and think-tank sinecures. There should be little nostalgia for what these men did, but perhaps a bit of it for what better and braver versions of them might have achieved.

Erekat and Arafat and Mahmoud Abbas, the perennial chairman of Fatah and President of the Palestinian Authority, had ample time to become founding fathers. Instead, their epitaph will be ineffectiveness.

Arab countries seem to be lining up to normalize relations with Israel, and now Sudan seems poised to extend that trend to Africa. These agreements were achieved with an approach that couldn’t have been a greater departure from Erekat’s stratagems, and these developments have left Erekat and the Palestinians raging irrelevantly on the sidelines.

What does it mean to negotiate if you can never say yes, as the Palestinians have never quite managed? How does a people take control of its destiny when it has so long become accustomed to the grim comforts of perpetual victimhood?

These are the questions that Erekat’s life raises but does not answer. Palestinians deserve answers, if not to these questions than to others, about the state of their national project, the reality of their situation, and the utter failure of their politics. Erekat couldn’t speak those truths, only negotiate to nowhere. The Palestinians will remain adrift until they find someone who can.

The peace process is hospitalized in Jerusalem with Covid