God is in the voting booth 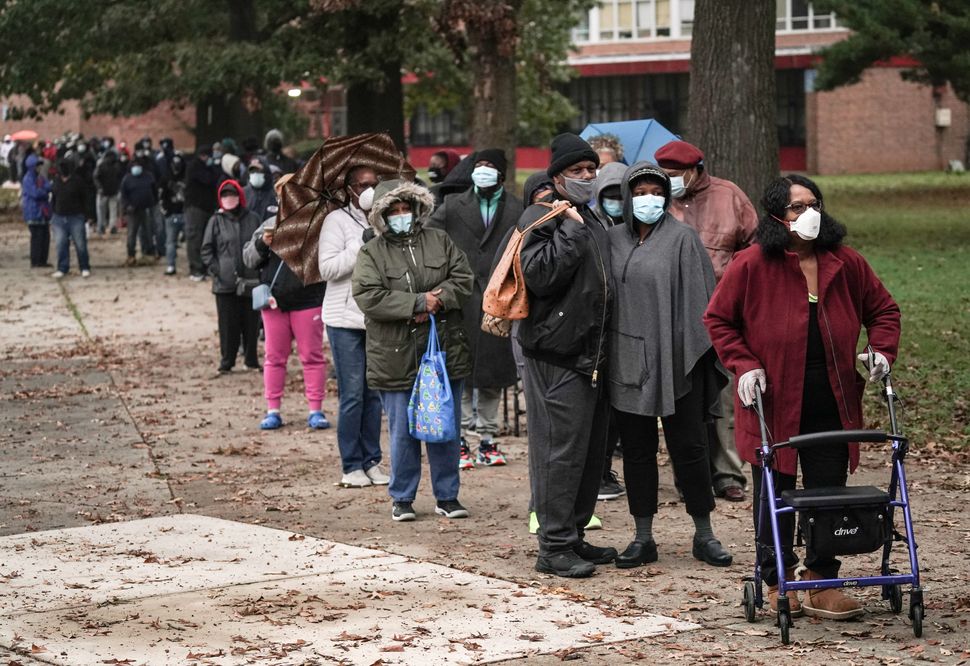 I remember as a young child how my parents would take me with them into the voting booth to teach me not just how all the levers worked, but how democracy worked.

For Jews of an earlier America, voting was a sacred privilege. Our immigrant forebears would dress for the polling place as though for shul on Yom Kippur. The responsibility to participate in the electoral process in their new homeland they deemed a holy act.

It still is. As the late Leonard Fein reminded us, “In the era of the modern state, there is no path to the fulfillment of Jewish interests and ideals that does not lead through the halls of government.” Despite all the distrust and disgust directed toward Washington these days, engagement in the process remains a sacred duty.

And it has always been thus in our tradition. In Genesis chapter eighteen, God decides to address the sins of Sodom and Gomorrah, to wipe out their corrupt, heartless, and violent inhabitants, one and all. But before God lowers the boom, he puts it to a vote: He tells Abraham what he intends to do. And Abraham, whom God has commissioned as his prophet, votes no. In one of the greatest examples of chutzpah in human history, Abraham challenges God: “Will you sweep away the innocent along with the guilty? What if there should be fifty innocent within the city? Will you then wipe out the place and not forgive it for the sake of the innocent fifty who are in it?” And then, he delivers the punchline: “Shall not the Judge of all the earth deal justly?”

God is moved by the argument, so much so that Abraham bargains God all the way down to ten righteous inhabitants. God concedes that if there are but ten righteous people living within the city, Sodom will be spared.

Alas, ten cannot be found. Our commentators ask how it is possible that there were not even ten righteous people there? Not even ten?! Their answer is that of course there were ten! But tragedy ensued because those ten, and countless others like them, had no interest in what was going on in their own city. They did not get involved, so they were not counted, and they were swept away along with the guilty.

The rabbis, in perhaps their harshest condemnation of human indifference, speak of a man standing in front of the doorway to his home. He looks around to the left and to the right, peering about at the community in which he lives. Seeing all of its troubles, he thinks to himself, “What does any of this have to do with me?” And he goes back into his house and closes the door behind him. The rabbis say of this man that God declares, “Let him be damned.”

At times, the world seems a dismal place beyond repair. In times like these, our views of humanity hardens against its potential for peace. Still, Judaism forbids us from shutting ourselves off to human pain and human need. “The ultimate measure of a man,” Dr. King once said, “is not where he stands in moments of comfort and convenience, but where he stands at times of challenge and controversy.”

Judaism demands our involvement in the messiness of the world. We Jews believe, not sanctimoniously but earnestly, that we have a story to tell and with it a set of values to share with the rest of humanity. And we believe that if we live out that story and live by those values that we can have a positive bearing on the future of God’s creation.
Though the world may at times appear deaf to Torah’s message of justice and compassion and peace, we Jews must proclaim it, and act upon it, and do what we believe must be done, to beat this broken world back into shape.

What we do (or don’t do) now through Election Day will determine the character of the nation and the nature of the society we leave for our children and their children. So we should be getting voters to the polls, assisting at election sites as non-partisan monitors, making certain our college-aged children and grandchildren vote, and speaking out when crudeness, bigotry, obfuscation and outright dishonesty trample our sense of right and wrong and our faith in government.

Our tradition doesn’t allow us to shut ourselves off from this sacred task.

Rabbi Joshua M. Davidson is the Senior Rabbi of Congregation Emanu-El of the City of New York.

God is in the voting booth