We are now a week out from what may be the most consequential U.S. presidential election in a generation. The election will be especially significant for American Jewry, who like all Americans are divided on President Trump.

There has been an alarming rise in antisemitism on Trump’s watch. But it’s the president’s record on Israel that has divided American Jews in the Trump era more than anything else. The Jewish community has been divided before over Israel — for example, over the Oslo Accords — but today’s split has a new fault line. Specifically, it has divided American Jews into those who prioritize Israel’s status as a Jewish state and those who prioritize it as a democratic one. And the president has played a crucial part in widening this schism.

The stakes of this split are high, given that the idea that Israel be both Jewish and democratic was an essential tenet of Israel’s founding and has been a fundamental precept ever since. Israel’s Declaration of Independence speaks of a Jewish homeland and of respect for the rights of non-Jews. Israel’s Basic Law on the Knesset codifies the specific descriptor “Jewish and democratic,” and support for Israel “as a Jewish and democratic state” has become something of a refrain among American Jewish organizations.

Moreover, Israel has long struck a delicate balance between its two characteristics, ensuring the existence of a national homeland for the Jewish people while guaranteeing that this homeland is a space in which all citizens — Jewish, Arab, Druze, or Christian — can exercise their fundamental rights to freely choose their representatives in government and express their beliefs without threat of persecution.

But not everyone is committed to this vision. It’s no secret that Prime Minister Benjamin Netanyahu belongs to the circle of world leaders whose populist, nationalist style President Trump admires and that Trump has enabled Israel to pursue its Jewish character at the expense of its democratic one. Trump has intervened in Israeli domestic politics to support Netanyahu, even as many observers have decried the erosion of democratic norms in Israel.

Take, for example, the White House’s endorsement of West Bank annexation as part of the Peace to Prosperity plan, which would render permanent the fundamentally undemocratic relationship between Israel and Palestinians in the territories and make it far more difficult for Palestinians to achieve their rights in the future or for Israelis to sustain their democracy. Even though Netanyahu nominally traded annexation for normalization with the United Arab Emirates, senior administration officials have reaffirmed that annexation is not permanently off the table and subsequent arrangements between Israel and Bahrain and Sudan feature no compromise on the Palestinian issue. And just this Wednesday, Netanyahu and U.S. Ambassador to Israel David Friedman signed an agreement extending scientific cooperation between the U.S. and Israel to Israeli institutions in the West Bank and the Golan Heights.

Whether or not he wins next Tuesday’s election, the president has reset the standard of what constitutes pro-Israel U.S. foreign policy, weighing in heavily on the Jewish side at the expense of the democratic side. And now, for some of Israel’s American Jewish supporters, nothing short of annexation will suffice. The two-state solution is not mentioned in the Republican Party’s most recent platform from 2016, and it is unlikely to return anytime soon.

Meanwhile, on the other side, the majority of Democrats remain vocally supportive of Israel as a Jewish and democratic state. And yet, there is a small but increasingly vocal minority on the American Jewish left and among some progressive politicians that advocates dispensing with Israel’s Jewish character as the best means to pursuing democracy and equal rights. This segment of our community wants Israel to be exalt in being democratic at the expense of being Jewish, a view exemplified by Peter Beinart’s endorsement of a democratic one-state outcome in a widely circulated essay this past summer.

Doing so, of course, would be a disaster, depriving the Jewish people of their right to a homeland and unraveling over a century of achievements by the Zionist movement. But the essay garnered praise from advisors to Bernie Sanders and Barack Obama, evidence of its mainstream appeal.

The issue ultimately circles back to an ascendant view on the American left that Zionism is a passé form of nineteenth century colonialism, not a fulfillment of Jewish self-determination, a right to which all peoples are entitled. Occupation or no occupation, Israel will always be an anachronism in the view of some. Whether intentionally or not, Representative Alexandria Ocasio-Cortez elevated this worldview when she refused to take part in an event commemorating the life of the late Yitzhak Rabin, who was assassinated for his concessions to the Palestinians in his quest for peace.

Opinion | Should Israel be Jewish or democratic? Trump has divided American Jews

Of course, Jewish and democratic need not be a binary choice, as supporters of a two-state solution well know. Strong and unequivocal support for a Jewish and democratic Israel and an independent Palestine, backed up not just in rhetoric but with concrete policy steps, will improve the lives of Israelis and Palestinians and undermine the harmful zero-sum calculations informing thinking on the political margins.

Sadly, this divide will persist in the American Jewish community and in U.S. politics, irrespective of the outcome of the election. But the next American president will play an instrumental role in determining whether these tensions can be reduced or if these opposing sides only harden their stances.

Susie Gelman is board chair of the Israel Policy Forum, a non-partisan American organization founded in 1993 that supports a viable two-state solution consistent with Israel’s security.

Should Israel be Jewish or democratic? Trump has divided American Jews 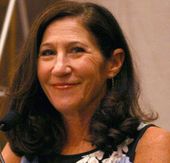 Should Israel be Jewish or democratic? Trump has divided American Jews