Why haredi rabbis, famous for their pragmatism, just backed a losing candidate 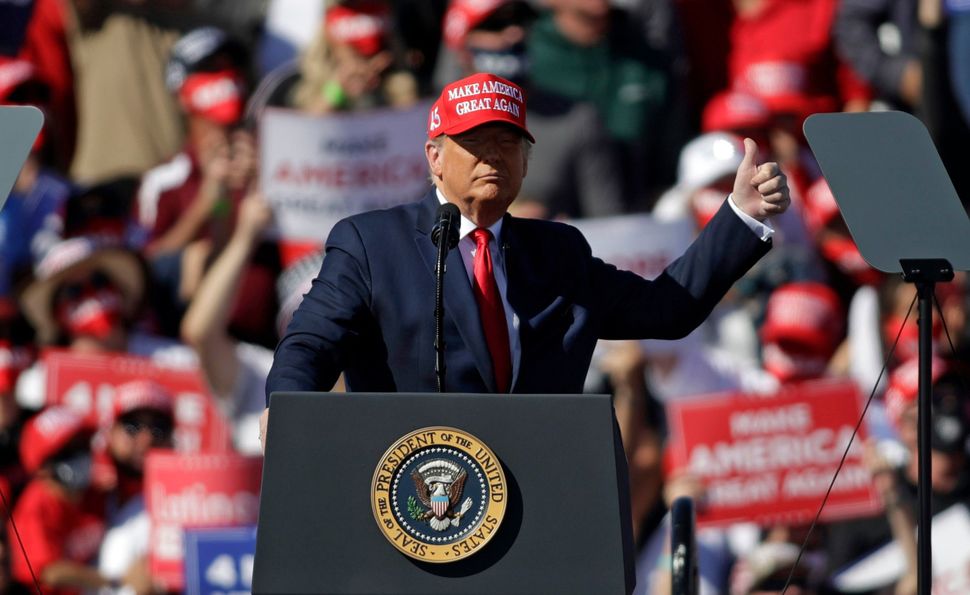 On Sunday, with just over a week to go until the 2020 election, rabbinic leaders of American haredi Judaism made clear that they want to see four more years of President Donald Trump. In an open letter addressed to Trump, thirteen leading rabbis commended the president for his defense of “religious liberty” and for designating shuls and yeshivas as “essential” under Covid regulations, which allowed them to stay open. Trump, delighted, thanked them on Twitter.

The move was perhaps not surprising on some level, formalizing what polling and conventional wisdom already indicates: that Orthodox Jews are outliers among the broader American Jewish population in their support for Trump and the Republican Party more generally.

But the letter actually told us a lot more than what we already knew. In fact, it told us something shocking. For these haredi rabbis weren’t just endorsing Trump; the letter was a fierce show of support for someone who is a clear — even likely — loser. In other words, it was a major — you might even say reckless — gamble.

While such a gamble might not seem unusual for seasoned political partisans, it should come as a huge surprise for anyone with any knowledge at all about the haredi community. Anyone familiar with haredi American Jews knows that they are savvy political operators with a deep commitment to pragmatism. Haredi communities in the New York and New Jersey areas have a history of being willing to work with politicians on both sides of the political aisle to secure policy victories — on issues of welfare, zoning, and education, for example — for their communities. Hassidic voters in New York City, for example, are famous for voting for Democrats, unlike what you might expect from a highly-religious group.

This transactional approach to politics is not just about getting results, though. It reflects something deeper and more theological about the haredi worldview than realpolitik, specifically, a philosophical objection to seeing this world as an end in and of itself.

To see how this works, think about another example: the haredi approach to Zionism. For a long time, haredi Jews of all stripes pilloried Zionism for rebelling against God’s plan for the Jewish people. Zionists in their view committed the cardinal sin of “forcing the end” i.e. of preempting God’s plan for the ingathering of the exiles and the redemption of the world. In fact, many early Zionists saw themselves that way, too. They characterized the faithful patience of much of the religious world as an exilic weakness, and sought redemption through human initiative and refusing to wait for whatever God had in store for the Jewish people.

The haredi repudiation of this view consisted not only in a rejection of secularism, but of secular impatience. The most vociferous haredi critic of Zionism was Reb Joel Teitelbaum (1887-1979), the first Grand Rebbe of Satmar. In his Va-Yoel Moshe, Reb Joel rebuked those Jews who sought “sovereignty and freedom before [the appropriate] time.” To him, this desire reflected a deeper desire “to be like all the other nations” and to rebel against God’s dominion over the Jewish people. He viewed Zionism as rank heresy and as a sin so terrible that God repaid it with the Holocaust.

Not all haredi Jews, then or now, shared Reb Joel’s assessment of Zionism. But his view did encapsulate a fundamental aspect of the haredi view of secular politics: It is a temptation not to be trusted.

Put differently, politics promises hasty solutions to problems that only God can solve in the fullness of time. This is why haredi leaders have always been transparent that their dealings with secular politicians were always transactional: Haredim promised political support based on tachles — practical considerations — rather than ideological affiliation. As such, no politician could monopolize haredi affections because haredim, or at least their leaders, understood the profound limits of politics.

It’s this backstory that makes the Sunday letter expressing breathless support of Trump — a man very likely to lose the election — such a shocking departure. It is particularly remarkable that Reb Joel’s two warring great nephews, Zalman and Aaron, both signed the letter, each as “Grand Rabbi of Satmar.” The giants of the haredi leadership have chosen Donald Trump’s reelection as the occasion to express what they have so often and so long withheld: enthusiasm for a particular politician and a particular ideology, beyond a relationship with a winning candidate that could serve their ends and their communities.

What could explain this shift? Why now?

The answer is in the letter. The COVID-19 pandemic hasn’t just taken all too many lives. It also laid bare deep questions about American democracy. When public health is at risk, when are civil liberties protected and when should they be curtailed?

With an uptick in haredi neighborhoods and targeted measures coming down from the secular authorities, the pandemic has haredim, particularly in New York, feeling like they keep winding up on the wrong side of this question. And when Governor Cuomo started demanding that yeshivas and synagogues close down again, haredi Jews viewed this as cutting off the lifeblood of their communities. As Orthodox and haredi Jews see it, city and state officials have defended rights of assembly for protestors while taking aim at the right of freely exercising one’s religion.

On this point, the rabbis’ letter expresses deep gratitude to Trump for “[sending] a clear and unequivocal message that the right to pray and study is non-negotiable.” Their willingness to forego all appearance of political neutrality reflects their view that, without Trump, those rights would have been — and no doubt will be — gravely endangered.

The gamble of this letter is a message from the rabbinic leadership to their communities that the old political approach will not meet the challenges of this time. As far as they are concerned, the wrong political outcome will endanger the ability for haredi communities to live and learn. The irony is that a new strategy is being deployed to preserve the old ways. The old patient optimism that any leader can be made into an ally has been replaced by a deep urgency about the present. The haredi leadership now appears more and more like the average American in their belief about the importance of a single election.

They also seem a lot more like those old Zionist antagonists: turning to politics for answers when salvation from elsewhere feels too long in arriving.

Judah Isseroff is a PhD candidate in Religion, Ethics, and Politics at Princeton University, where his focus is Jewish politics and theology.

Why haredi rabbis, famous for their pragmatism, just backed a losing candidate