Frustrating but indispensable, Saeb Erekat was like the peace process: heroic. 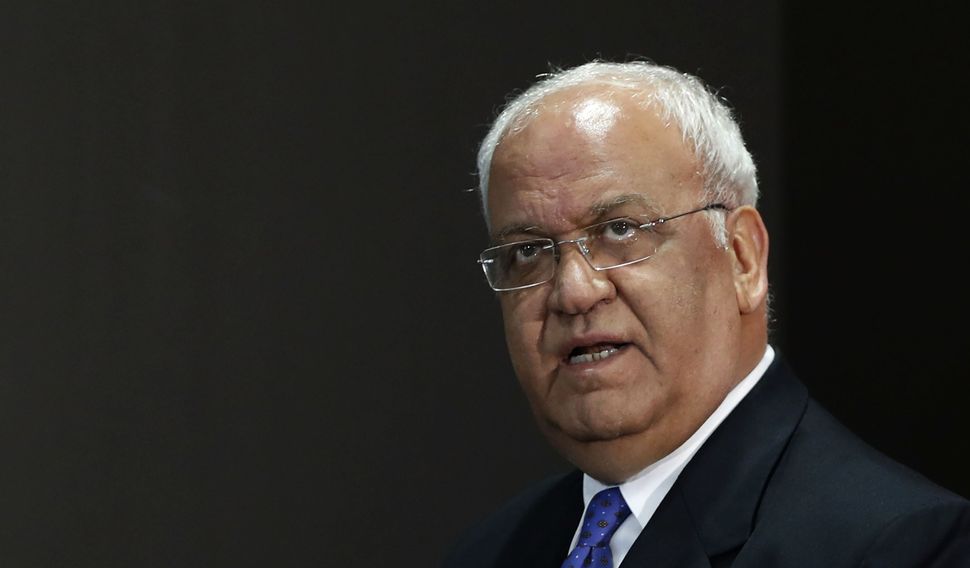 On Tuesday we learned of the passing of Saeb Erekat, a chief Palestinian negotiator, who succumbed to complications due to Covid in a Jerusalem hospital. For 30 years, since the Madrid Peace Conference of 1991, Erekat was a cornerstone of the peace process, a main pillar of any efforts to end the conflict. To most Palestinians, his name is synonymous with the two-state solution, negotiations, and peace, and his death represents a calamity not just for the Palestinians, to whom he had dedicated his life, but to all advocates of a just and lasting peace between Israelis and Palestinians.

Saeb Erekat was 36 when he joined the Jordanian-Palestinian delegation to the 1991 Madrid conference. He came to the opening ceremony wearing a Kuffiyeh. The Israelis threatened to leave. The Kuffiyeh stayed & so did Erekat who was indispensable to the Peace Process. May he RIP pic.twitter.com/WBvgADOfmc

Erekat’s belief in the certainty of a future peace was unshakable. He made it his life’s goal and legacy, and believed it was his destiny, the thing he was “born to do,” as former Israeli Chief Negotiator Tzipi Livni noted today.

I’m saddened by the death of @ErakatSaeb. Saeb dedicated his life to his people. Reaching Peace is my destiny he used to say.
Being sick, he texted me: “I’m not finished with what I was born to do”.
My deepest condolences to the Palestinians and his family. He will be missed.

Saeb, whose name means “correct” and “poignant” in Arabic, was uncompromising, adamant and righteous. He was, of course, not perfect. He could be cantankerous, speechifying and easily provoked by Twitter trolls of late, sometimes too keen to give an answer to every troll. But it was also part of his charm; he was down to earth, loved and cherished by those who knew him, and warmly remembered, even by his opponents.

My deep condolences to the family of Saeb Erekat. Saeb & I were worlds apart in our views of the Israeli-Palestinian conflict, it’s history & how to resolve it. But he tried hard to represent his people. Wishing his family much comfort /strength during this difficult time.

Opponents he had many, on both sides of the conflict. He infuriated many Palestinians with his dedicated advocacy of negotiations and peace at times when the political process seemed to be a waste of time. “Life is negotiations,” he used to casually say, which became the title of his most notable book.

Indeed, Saeb embodied the peace process itself: imperfect, frustrating at times, yet still essential and indispensable, and overall something that must be thought of fondly.

His passing today symbolizes the slow but sure demise of the Palestinian peace camp. Under Trump’s presidency, the number of Palestinians who believe that the two-state solution remains a possibility has been sharply declining, and Palestinians who believe this solution can be reached through diplomatic talks are now seen as delusional. That’s why it’s hard to think of anyone who can fill Saeb’s role. It’s not just because he was uncommonly adamant in heart and mind that negotiating for peace was the only way forward. It’s also because the Palestinian peace camp has been marginalized, targeted and disincentivized during Trump’s and Netanyahu’s terms. The role as Chief Negotiator is now more of a bane than boon.

Saeb and the main Palestinian protagonists of the peace process have been often attacked by people from both sides. They are now increasingly attacked by their own people because they have shown little or no tangible results stemming from their gamble on the peace process or their devotion to Israel’s security through the locally frowned-upon “security collaboration” apparatus.

I’m sure flowery eulogies will follow, but to many Palestinians he was seen as someone who negotiated their rights away to a settler-colonial state

Of course they are also smeared by right-wing pro-Israelis as “terror-supporters” and “antisemites.” In Saeb’s last days, AIPAC’s former executive director, Neal Sher, petitioned the Trump administration to bar Saeb from entering the U.S., labeling him a terrorist inciter. Even after his death, right-wing trolls hastened to taint his memory and demonize him.

⬇️ Troll funded by Russian oligarch Vladimir Sloutsker, who lies about his identity on his Twitter bio, responds to the death of a Palestinian leader. Imagine devoting your life to such trash. @TwitterSupport https://t.co/xUKrcLU9aP

No wonder no one wants to follow in his footsteps, only to be attacked from both sides. But that’s why it’s important to honor Saeb’s legacy as a peace hero.

If Yitzhak Rabin, a former military general, could make the cut, so should Saeb.

Saeb, 65, should be remembered as a faithful husband and a caring father of four to Salam, Dalal, Ali and Mohammad. He was a loving grandfather, a decent Palestinian and a fervent believer in peace who never pointed a gun at anyone or wished harm unto others.

Celebrating Saeb’s memory and making him an icon of Israeli-Palestinian coexistence would give Palestinians hope that those of us who chhose to advocate for peace would be warmly embraced and genuinely appreciated by the international community — and the Jewish community.

It’s more paramount that when Joe Biden’s administration assumes office, they ensure that Saeb’s investment of 30 years of his life to see peace unfold between Israelis and Palestinians does not disappear, and that his toil was not in vain. It should be among the administration’s key priorities to see a substantial advancement towards Israeli-Palestinian peace and a meaningful improvement to the lives of Palestinians.

_Muhammad Shehada is a contributing columnist for the Forward from Gaza. His work has also appeared in Haaretz and Vice. Find him on Twitter @muhammadshehad2._

Frustrating but indispensable, Saeb Erekat was like the peace process: heroic.