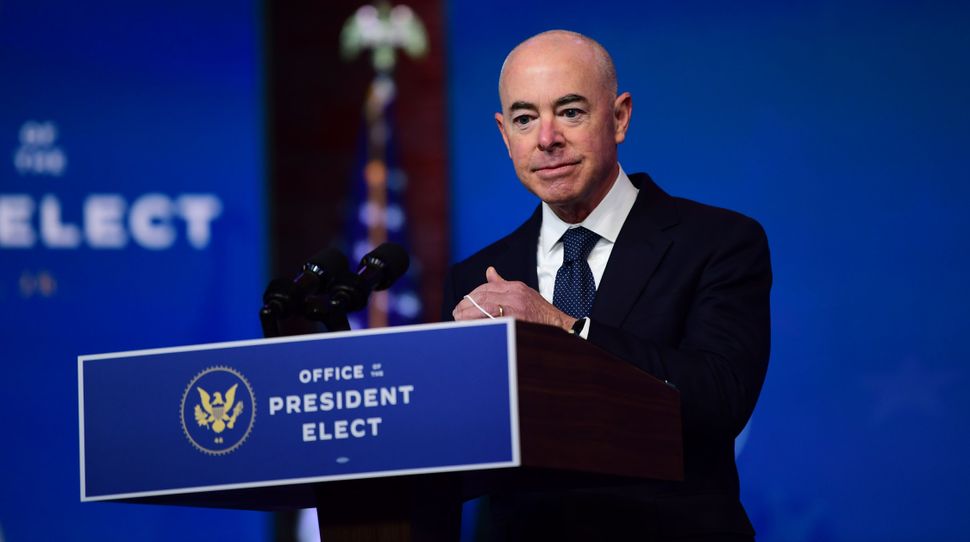 The incoming Biden Administration is already making major waves with a number of firsts: the first woman Secretary of the Treasury, first woman Intelligence Chief, and of course the first Black, Asian-American, woman Vice President. But there’s another major first for a different nominee: Alejandro Mayorkas, Biden’s pick for Department of Homeland Security Secretary, will be the first Sephardic Jew in American history to serve in a cabinet.

Born in Havana, Cuba, Mayorkas is the son of a Sephardic father whose family hailed from the former Ottoman Empire, what is today Turkey and Greece, and an Ashkenazi mother who escaped the Holocaust in Romania. As a baby, Mayorkas immigrated to Miami with his family, eventually migrating to Southern California where he attended school at UCLA. He later went on to become U.S. Attorney for the Central District of California; he was the youngest federal prosecutor in the nation. Most recently, he served as the Obama Administration’s Deputy Secretary of Homeland Security.

If confirmed, his appointment would be history-making. All too often, Sephardic history, culture, and identity have been erased from the wider Jewish American narrative, something that young Sephardic Jews like me continuously struggle with; it’s as if our community does not exist or does not matter.

Sephardic Jews have a long, rich, and complex history in the United States. There has been a Sephardic presence in North America since the colonial period, and numerous Sephardic Jews have played major roles in the country’s founding, World Wars I and II, and even in the Civil Rights Movement.

Former Supreme Court Justice Benjamin Cardozo, a descendant of the Spanish & Portuguese Communities of Western Europe, is known as one of the greatest contributors to American legal jurisprudence in the first half of the 20th century, and is arguably the first Hispanic Justice on the Court.

Sephardic community leaders like Albert Amateau organized New York voter registration drives in the 1930s and 40s and formed the Sephardic Democratic Club of New York to mobilize the Sephardic voice in American politics. Eddie Ayash, one of the founders of the 1099 SEIU Union and the Union’s longtime Treasurer, actively fought for labor rights in the 50s, and was pivotal in integrating the union, allowing African Americans to become full fledged members.

Maurice Nadjari, born in the Sephardic immigrant community of the Lower East Side, served as a New York special state prosecutor and aggressively sought to combat government corruption, sometimes to a fault. There was also a Sephardic Rabbi in Alabama named Solomon Acrish who publicly spoke out in support of the Montgomery Bus Boycott, only to have his synagogue face threats of being firebombed.

These stories, together with the wider Sephardic experience, have been wiped from the American Jewish narrative. People do not think of Ladino when they think of a Jewish language; they think of Hebrew or Yiddish. They don’t think of borekas or keftikas when they list Jewish foods; they bring up matzo ball soup and pastrami. Most American Jews have no clue that Sephardic Jews have been at the forefront of national and public service.

You can see this erasure in how the news is reporting Mayorkas’ nomination. Most outlets only refer to him as Latino, still a monumental and important milestone for the first Latin-American DHS Secretary. Some mention his Jewish and Cuban heritage, but very few, if any, reference that he is Sephardic, wiping away an entire history, culture, and identity.

Wiping away my identity.

You can see a fascinating Sephardic identity built into the Mayorkas family name, which quite literally spans hundreds of years of history and at least three separate continents. According to Dr. Devin Naar, the Isaac Alhadeff Chair of Sephardic Studies at the University of Washington, not only does the name reference his Iberian origins well over five centuries ago, but his use of the letter “k” in his name alludes to his family’s Turkish origins, most likely from Istanbul or a smaller community like Silivri in the 1920s. This was during a period of alphabet reform in Turkey, where surnames would have been transcribed with a “k” rather than a “c.” Combine that with his traditional Latin American first name of Alejandro, you get an incredibly diverse and barrier-breaking story from just a name.

Mayorkas’ family history and the position he’s been nominated for connects directly to America’s complex and often racist approach when it comes to immigration. Mayorkas was a refugee and was supported by HIAS (formerly the Hebrew Immigrant Aid Society), which helped tens of thousands of Jewish and particularly Sephardic Jewish immigrants come to the United States at the turn of the 20th century. When the 1924 Immigration Act made it nearly impossible for Sepharadim to enter the country, often based on antiquated, racially motivated standards, HIAS helped many of them go to Cuba instead, which is most likely how and why Mayorkas’ paternal grandparents ended up in Havana. There is a Turkish-Cuban Sephardic community in Miami today that shares a similar trajectory to Mayorkas.

Si Kere El Dio — If God wills it — Mayorkas’ appointment will mark a new moment where Sephardic contributions to the American experience will at last be recognized. It’s long overdue in the American Jewish community.

Ethan Marcus is the Director of Communications of the Sephardic Jewish Brotherhood of America, the national umbrella organization for the Ladino-speaking Sephardic Community in the United States. He previously served as a Fulbright Scholar in Athens, researching the unique customs and history of the Jewish Communities of Greece, and attended Princeton University.