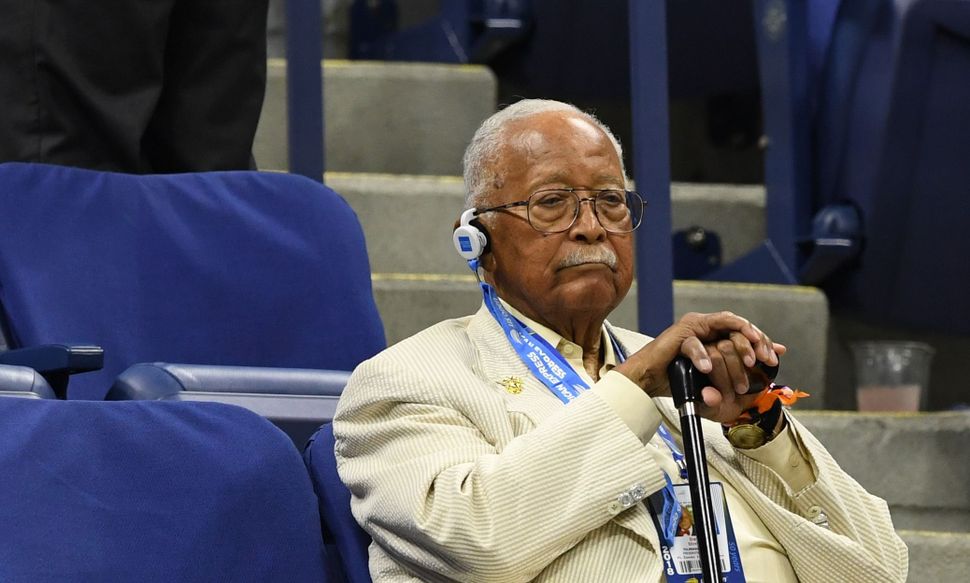 The death of Mayor David Dinkins is a sad moment for those who cherished New York as what he liked to call a “gorgeous mosaic.” The Forward had favored him when, in 1989, he narrowly won the mayoral race against Rudy Giuliani, who then was the United States attorney in the city. I was the editor-in-chief when we endorsed him for a second term, in a meeting that could not have been more dramatic.

Dinkins was already mayor when I launched the English edition of the Forward in May 1990. Fifteen months later, riots erupted in Crown Heights, the Brooklyn neighborhood where Blacks and Orthodox Jews live side by side. The Forward became the first newspaper to report that the violence echoed the pogroms that had once wracked Eastern Europe. We marked it in a front page editorial that began as follows:

“Jewish homes were being attacked, windows broken. Jewish residents were cowering in the safest rooms of their homes. Sympathetic gentiles in the area were sneaking word to some of their Jewish neighbors to keep their lights turned off. Marauding bands of outside agitators were roaming around, blaming Jews. This was taking place not in, say, prewar Poland or the Pale of Settlement back in an even earlier time. This was taking place in the Crown Heights section of Brooklyn.”

Dinkins would be accused of either hanging back or failing to react quickly and forcefully enough against the violence. That was still an issue when, in the fall of 1993, the Forward Association, our governing body, met to decide whether to endorse him for a second term. Its general manager, Harold Ostroff, asked me whether I would like to stand on principle and opt out.

“Actually,” I said, “I’d like to stand on principle and opt in.”

Outside the boardroom, I nodded to the bronze bust of Abraham Cahan, the Forward’s founding editor. Inside, the meeting proceeded sedately until one member suddenly stood up and said, “I am a secular Jew, and I just don’t think we should get too close to the religious.” The remark brought what I’ve previously described as a “gasp of horror.”

“What? What?” people started shouting. “We all bleed the same blood!” someone hollered.

The tumult was silenced by one of the Association’s oldest members, Benjamin Gebiner. He had been born in Rovno, Ukraine, and had been forced to flee the Soviet Union because of his Zionism. In America, he’d been a founder of the Jewish Labor Committee.

When Gebiner indicated he wanted to speak, the room fell silent — and stayed that way as he worked his 94-year-old frame, well over 6 feet tall, into a vertical position.

More shouts went up, according to an account later published in the Forward. “Hear ye! Bravo!” That’s when someone leaned over to me and whispered, “He was there! He was there!”

The matter was soon put to a vote, a secret ballot in an open meeting of the membership. The outcome was announced by the Association’s president, William Stern.

The vote, he said, was for Dinkins, but by a slim margin. “So we hope,” he said, “that our editors will endorse Mayor Dinkins — but not too enthusiastically.”

Which is what we did. It didn’t help. Dinkins lost, and the Giuliani reign of began. He would go on to be a successful mayor. Yet I have never regretted endorsing Dinkins.

It taught me the concept of editorial stare decisis — the importance, even in editorial writing, of precedence: in this case, the paper’s long support for the Black-Jewish alliance.

A decade or so later, I noticed the ex-mayor eating at a nearby table at the Four Seasons. I didn’t know him well, but I went over to shake his hand.

It was just a brief conversation. Mayor Michael Bloomberg was in office then. The city had not yet become polarized the way it is today, and the idea of a gorgeous mosaic did not seem so distant as it does now.

I did mention the Forward’s endorsement. Hizzoner acknowledged it with the politeness that is one of the things for which he will be missed.

Seth Lipsky was the founding editor of the Forward’s English edition in 1990 and edited the paper for 10 years.