The JVP antisemitism panel was problematic for what wasn’t said 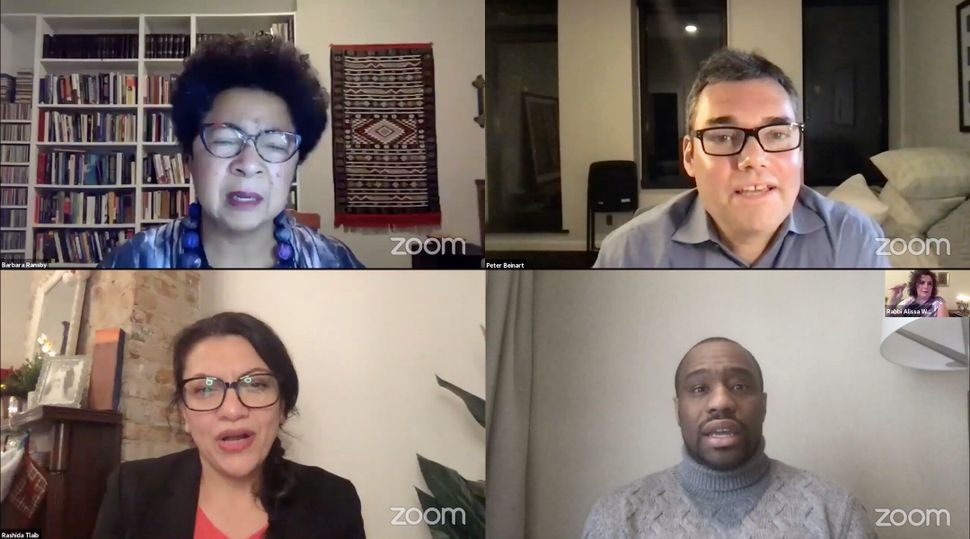 JVP’s event featured Tlaib and Temple University Professor Mark Lamont Hill, both of whom have advocated for boycotting Israel in the past and both of whom have been accused themselves of antisemitism, so the event was bound to elicit controversy. But for all the criticism that the event received, what I saw last night was an acknowledgement by the progressive left that antisemitism was real and needed to be considered within larger intersectional movements to win justice “for all people,” as Rabbi Wise put it.

“Jews are not alone,” remarked Rabbi Wise, “Jews have allies.”

And last night, those allies spoke up.

Well, in part. While the panelists did recognize the dangers of antisemitism, they failed to therefore recognize why Jews might therefore be attached to one of the greatest defenses against antisemitism — the state of Israel.

Hill discussed the historic role that Jewish people played in the Civil Rights and Black Lives Matter movements, explaining that the reason Jewish people are overrepresented in social justice struggles is because they understand oppression. “The only way that we can be free is if our Jewish brothers and sisters are free,” he affirmed.

Tlaib similarly acknowledged that Jews, like Muslims, are victims of oppression. “My motivation for fighting antisemitism comes from the fact that everyone deserves human dignity,” she said, comparing it to her drive for fighting for Palestinian rights.

There was no question in my mind watching the event that the speakers were all committed to fighting what they saw as antisemitism.

“The enemy is not BDS,” another panelist, University of Illinois professor Barbra Ransby, explained. “The enemy is the person who went into the Tree of Life Synagogue in Pittsburgh and killed 11 people,” she went on. “It’s important to define the thing that we are talking about so we don’t get distracted in defining other forms of speech, other forms of resistance as antisemitism.”

Hill did acknowledge that antisemitism exists on the left. In his prerecorded responses, he said that he himself had heard and seen antisemitism. “There were moments when I would be in movements or be in meetings, I’d be reading a book or pamphlet or literature and I would hear the way Jewish people were being smeared,” he said.

Another panelist, CUNY Professor Peter Beinart, also paid brief lip service to the fact that “antisemitism does exist on the left.” And yet, by and large, to all the panelists, the “real” threat of antisemitism is chants of “Jews will not replace us” by white nationalists in Charlottesville, but not the British Labour Party leader brushing off allegations of antisemitism. For all the contemporary talk of systemic racism, the notion of antisemitism being laced through contemporary discourse wasn’t given much credence.

There was little acknowledgement of Israel’s historic role in shielding Jews from the very kinds of antisemitism that the panelists committed to eliminating, a lacuna which spoke to the privilege that American Jews possess and which marked a failure on the part of the non-Jewish panelists to consider that many Jews credit their support for Israel to their fear that efforts to fight antisemitism are insufficient.

For all the talk of the need to come together in fighting economic, social and racial oppression, there was no acknowledgement of Israel’s socialist founding, its strong labor rights, or its respect for LGBT rights. There was similarly no acknowledgement of the various progressive movements within Israel lobbying for change. I’m by no means claiming that Israel’s progressive record excuses its treatment of Palestinians, but any discussion related to the Jewish State requires more nuance.

At the webinar’s close, Beinart asked Jewish attendees rhetorically: “Listen to the folks on this panel: Do they sound like anti-Semites? Trust your instincts.”

Of course, they don’t, but that’s the issue: Hill, Ransby, or Tlaib are not explicitly antisemitic. I don’t think they sit in rooms and plot how to harm Israel or Jews. I believe that Tlaib was genuine in saying that she loves Jews and want to dismantle hate in all forms.

The issue is what wasn’t said.

What troubled me was the implication that with the exception of Beinart’s call to include Zionist Jews within progressive discussions, to be a “good Jew” means to join boycotts against the state established to protect your people. They implied that the Jewish state is yet another “force of oppression” that must be opposed.

To be a progressive Jew is to be wary of the State of Israel, but also skeptical of those skeptical of the State. To be a progressive Jew is to feel an urge to be an ally in larger struggles for justice, while realizing that discourse blaming “the powerful” or “politicians” often carries with it a tint of prejudice against the Jews holding those positions. And to neglect these complexities is to fail to address the very antisemitic stereotypes that progressive movements seek to dismantle.

It’s an easy fix for people who are truly serious about protecting Jews. I hope the panelists are.

Martin Francisco Saps is a Uruguayan-American writer whose work has appeared in Haaretz. You can find him on Twitter @SapsMartin.

The JVP antisemitism panel was problematic for what wasn’t said