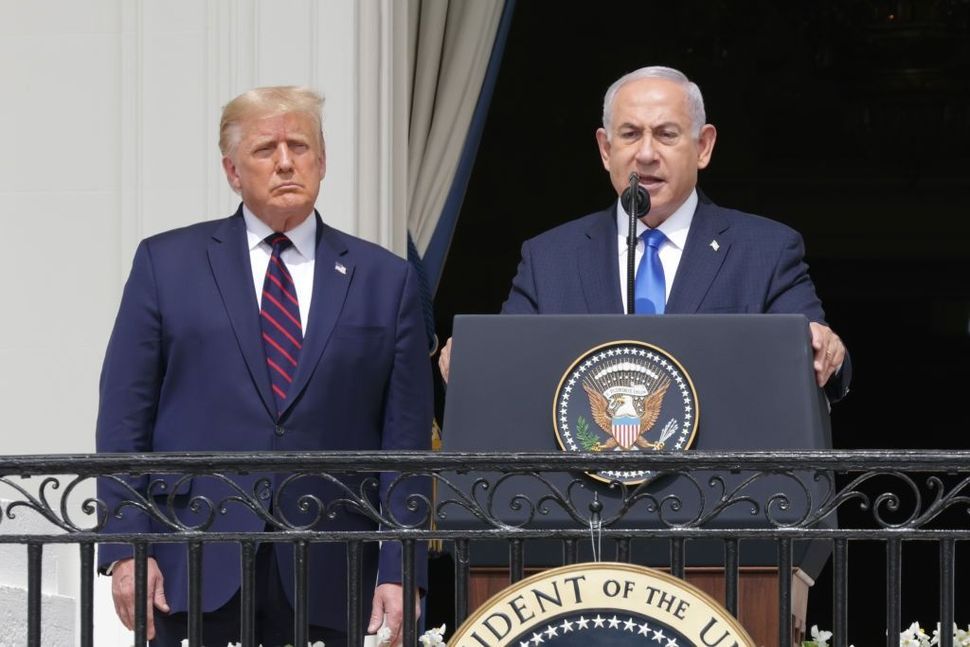 Prime Minister of Israel Benjamin Netanyahu speaks as U.S. President Donald Trump looks on during the signing ceremony of the Abraham Accords on the South Lawn of the White House September 15, 2020 in Washington, DC. Image by Alex Wong/Getty Images

2020 was a breakthrough year for Middle Eastern peace. The Abraham Accords have warmed relations between Israel and a number of Muslim majority nations, including the United Arab Emirates (UAE), Sudan, Bahrain and Morocco.

For too long American, Israeli, and international leaders indulged Palestinian demands without insisting on much from their leaders, swallowing the propaganda line that making Palestinian dictators happy was the only way to cultivate a peaceful Middle East. President Trump and his team shattered this delusion.

The road to peace does not run through Ramallah and does not require tolerating Palestinian terrorism. And peace works best when it is buoyed by all kinds of bottom-up economic, cultural and personal ties reinforcing the political and diplomatic ones.

In 1993, there were those of us who opposed the Oslo Accords because we didn’t trust Palestinian terrorists to deliver peace. If there is one real crime the Israeli government has committed against the Palestinians, it’s the Oslo Accords, which imposed Yasser Arafat’s dictatorship on the Palestinians instead of cultivating the more grassroots democratic leadership that was sprouting in the 1990s.

Oslo failed because it trusted a corrupt dictator to provide the security we needed. But empowering Arafat as “our dictator” to crush Hamas and other enemies of peace backfired.

Inevitably, as the Palestinian Authority’s leader, Arafat used whatever tools he had to control his people. He attacked Palestinian civil society and crushed independent media. His corrupt economic system ran protection rackets for the PA’s cronies. And his education system taught children to hate Jews, keeping Israel as a convenient enemy.

Some have called it hypocritical to oppose Arafat’s dictatorship, and later that of Mahmoud Abbas, while celebrating Israel’s new peace agreements with autocratic nations like the UAE, Sudan, Bahrain and Morocco. But it is not contradictory.

Israel prefers peace with democracies, but we can’t pick our neighbors or their political systems. Just as the “Peace Processors” insisted for decades that “you make peace with enemies not friends,” we endorse making peace with dictators, if they want to see us as friends, not scapegoats.

We believe that the Abraham Accords will succeed because they are rooted in a shared enemy — Iran — while nurtured by multiplying economic, cultural and political ties.

This initiative builds peace from the bottom up. Rather than demonizing Israel and Jews, the Gulf Arabs are welcoming Israelis and experiencing warm welcomes in return.

This approach not only contrasts with the self-destructive anti-normalization positions Palestinian leaders have taken toward Israel, but also differs from the “cold peace” Israel achieved with Egyptian and Jordanian leadership. Yes, there have been no wars between Egypt and Israel since peace was declared, but anti-Israel and antisemitic libels are still commonplace there.

The hypocrites are not those of us who fear the PA yet support Israel’s normalization with Bahrain, the UAE, Morocco and Sudan. The only hypocrites are those who have shouted themselves hoarse for “Peace Now” for decades yet are suddenly suspicious when a true peace blossoms in the sand dunes of the Gulf and the Sahara.

Every agreement with an ex-adversary works to better protect the entire Middle East from war, terrorism and delegitimization. We hope that peace will prove contagious and, eventually, that genuine democracy inspired by Israel will prove to be equally catchy throughout the region.

Clearly, President-elect Joe Biden’s administration will distance itself from President Trump’s policies on most fronts. When it comes to the Middle East, however, Biden should build upon Trump’s achievements and out-of-the-box thinking. We hope that an authentic, sweeping peace process will indeed end in Ramallah. But it’s time for us all to recognize that the Oslo assertion that the only road to peace runs through Ramallah is a lie.

Natan Sharansky was a political prisoner in the Soviet Union and was a minister in four different Israeli governments. Gil Troy is a Distinguished Scholar of North American History at McGill University.

This article is based upon their new book, Never Alone: Prison, Politics, and My People.