In these times of terror, may God continue to bless America 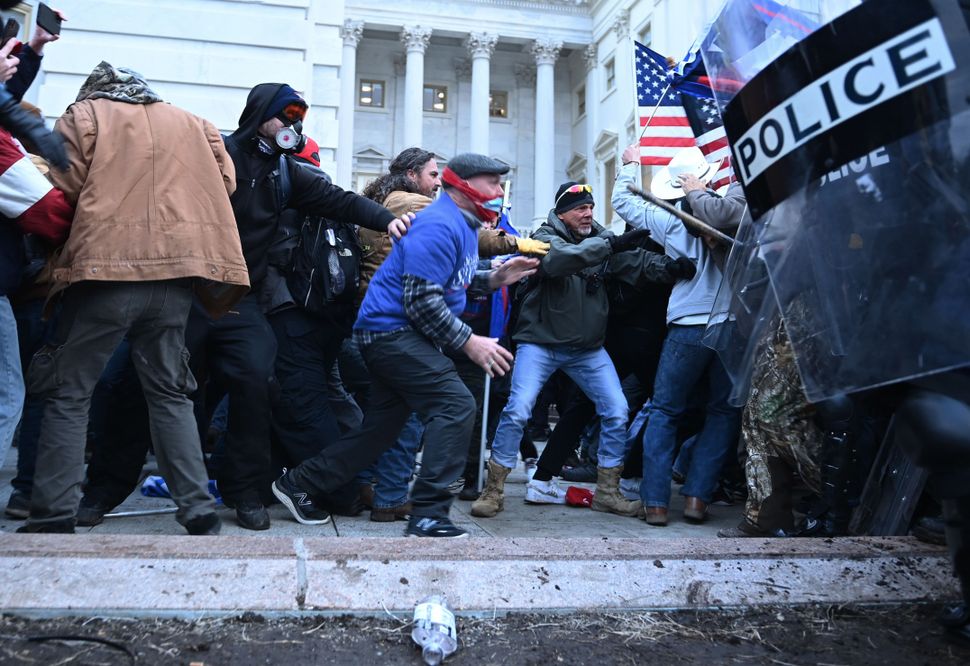 Trump supporters clash with police and security forces, as they storm the U.S. Capitol in Washington, D.C., on January 6, 2021. By BRENDAN SMIALOWSKI/Getty Images

I am watching an attempted coup while my daughter eats bagels and plays with my phone.

She is getting frustrated, because the phone is buzzing off the hook, knocking off her episode of “Peppa Pig.” The messages come fast and furious.

“Are our friends okay?”

I text my husband three simple words: “Get home now.”

“Your first night in D.C.!” he exclaimed. “Let’s show you the sights!”

It doesn’t sound true, but it is. He drove me to the Jefferson Memorial, then the Lincoln, and finally to the Capitol. He paused so I could step outside and take a look. I stared at the beautiful building, all lit up in the night, and I cried. I was so damn thrilled to be there.

By the time I met my roommates, I was starry-eyed. They laughed and bought me a margarita. “Welcome to Washington,” they said, “where everyone thinks they are going to change the world.”

I have so many beautiful memories of Capitol Hill. On my first day advocating for change on Capitol Hill I spoke to members of Congress about malaria, a major global killer of children, and why they should contribute to the Global Fund to fight it, AIDS and tuberculosis. I accidentally got in the members-only elevator, where a Senator politely pointed out my mistake. I slunk away, embarrassed.

The first time a member of Congress said “yes” to an ask I made, for hundreds of millions of dollars in appropriations for global HIV/AIDS treatment, I thanked them professionally, then danced wildly in the hallway. I have attended over 2,000 meetings on Capitol Hill and organized over 1,600 of them myself. My joy and amazement at witnessing democracy in action never went away.

I have seen the power of the people coursing through those hallowed halls. It is righteous. Together, we have won incredible victories.

Democracy doesn’t always work the way you want it to. We have also suffered crushing defeats. After one particularly brutal loss, my friends and I stood on the roof of my apartment building, furious and sad, and yelled: “Screw you, Congress! We should have won! Our bill would have helped people!” Several older operatives saw us and laughed. “We’ve been there, kid, have a beer,” they said. “You’ll get ‘em next time.”

That’s the thing about democracy. Sometimes you lose. You have a good cry or shake your fist at the sky. Then you get up off the mat, brush yourself off, and go back to the fight. That is America, that’s Washington. That’s the whole damn thing.

He has barely bothered to even do the job of President, spending the last 11 months golfing and tweeting while over 350,000 Americans died of COVID-19. Today, he encouraged rioters to seize the Capitol and overthrow our democracy. He has attempted to subvert the will of the people for months, asking state officials, most recently in Georgia, to “find him” votes and threatening political retribution to any Republican accurately administering our election. He has fomented hate and antisemitic conspiracy theories for years.

His supporters are trying to steal the election from the American people in his name. He must be held accountable, even when he is out of office. We cannot allow American democracy to fall.

Despite my fear, I believe we will succeed in this task. I believe that the will of the people will be brought to fruition, and Joe Biden will be President.

Even the ones who have been complicit in and encouraged these seditious riots.

I am not a traitor. I believe in democracy, which means I believe that fairly elected representatives, no matter how much I disagree with them, are entitled to peace, safety and the fair democratic procedures outlined in our Constitution. In these times of unprecedented violence and terror, may God continue to bless America.

Carly Pildis is the director of grassroots organizing at the Jewish Democratic Council of America. She also writes a weekly food column in the Forward, #tweetyourshabbat. Follow her on Twitter @CarlyPilids

In these times of terror, may God continue to bless America