Jewish institutions must show courage, and take a hard line on Trump’s enablers 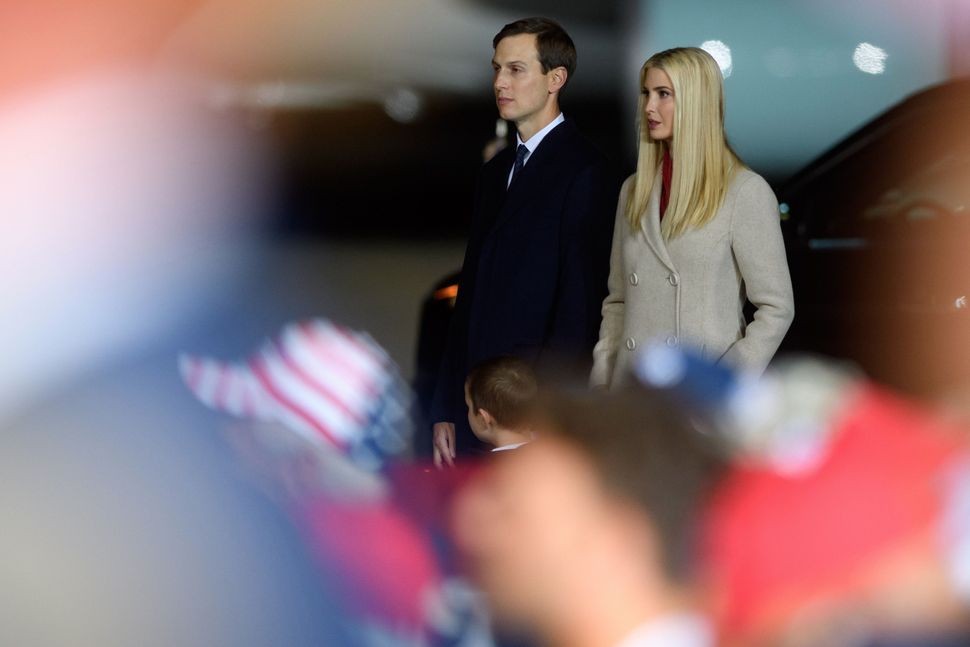 Ivanka Trump and Jared Kushner at a Trump campaign rally at Atlantic Aviation on September 22, 2020. By Jeff Swensen/Getty Images

After Wednesday’s disgraceful assault on Capitol Hill, it is clear that there must be severe consequences for those who enabled and encouraged President Donald Trump’s big lie that the 2020 presidential election, which President-elect Joe Biden won, was stolen.

Certainly, those who incited and participated in the insurrection must be prosecuted. But ensuring legal accountability is not enough.

The social sphere, too, must be made safe for democracy. As many have argued, America’s social institutions must not welcome back those who helped create the alternate reality that led to Wednesday’s attack. The comfortable positions at universities, think tanks, nonprofits and corporate boards ordinarily reserved for alumni of honorable administrations should not be available to those who have stood by Trump as he has worked to undermine our democracy.

We in the Jewish community must be particularly stringent in resisting the temptation to “turn the page” and “unite” through means of forgetting. American Jews do not have a special responsibility to protect democracy — we are citizens equal to all others — but we do have a unique historical experience that should inform how we respond to the prospect of a mob overthrowing or attempting to prevent the installment of a freely elected government.

There are signs that American Jewish leaders understand the gravity of the situation. In a Wednesday statement, Jonathan Greenblatt of the Anti-Defamation League minced no words. “The President has promoted sedition and incited violence… His campaign of disinformation is a clear and present danger to our democracy,” Greenblatt said. (Full disclosure: I am a member of the ADL’s 2020-2021 Glass Leadership Institute class.)

Among the many other Jewish organizations whose leaders issued condemnations of Wednesday’s riot, and Trump in particular: David Harris of the American Jewish Committee; the National Council of Jewish Women; the Rabbinical Assembly; and the Jewish Council for Public Affairs.

In the face of unspeakable violence, these and other Jewish leaders have met this volatile moment by clearly stating who was at fault and what was at stake. Still, I can’t escape the fear that once this moment and its immediate perils pass, the instinct to let “bygones be bygones” will return.

We must guard against that eventuality.

The tendency to forgive is noble and will, in the wake of the Trump administration, to a large degree be necessary. Trump supporters should not be put into herem, or exile; doing so would lead to the unseemly blanket exclusion of many Orthodox Jews. Like tens of millions of Americans, they made a tragic mistake and will have to move on with their lives, as will the communities to which they belong.

But this forgiving attitude cannot transfer over to those who directly enabled the wickedness in Washington, regardless of how this makes Trump supporters in our Jewish community feel. This includes prominent Jewish Trump supporters, like Jared Kushner, Ivanka Trump and Stephen Miller, as well as any non-Jewish Trump officials who wish to engage with our institutions.

What should communal accountability for prominent Trumpists look like? Any formulation must not systematically exclude Jewish conservatives, but must be scrupulous about penalizing those who participated in or failed to disavow Trump’s efforts to overturn the election.

Jared Kushner and Ivanka Trump, so long as they do not acknowledge the 2020 election was conducted freely and fairly, cannot be the honored guests of any self-respecting Jewish organization’s shindig. (Side note: remember those?) Unless and until he apologizes for covering up Trump’s lies and treating the threat to democracy with unconscionable insouciance, Mike Pompeo’s so-called “accomplishments” in the Middle East merit no Hakarat HaTov.

Some will say that this requirement is actually too lenient, and that a belated acknowledgement of the results is insufficient to return to respectability. I do not begrudge that argument, but leaders of mainstream institutions will by the nonpartisan nature of their work be required to accept something less than absolute moral purity. Still, any such acknowledgment must explicitly reaffirm the truth: there was no stolen election.

One category in particular must be set aside for the harshest censure. Architects of the plot against our country, such as Trump himself, Rudy Giuliani and Senators Ted Cruz and Josh Hawley should be made persona non grata with no path to rehabilitation. Honoring them and respecting democracy are totally incompatible actions.

If we are to remain a community that is committed to democracy and the rule of law, it cannot be any other way. Forgetting is not the default option. It is a profoundly immoral dereliction of leadership.

Jewish institutions must show courage, and take a hard line on Trump’s enablers