I voted for Trump, but I didn’t sign up for this 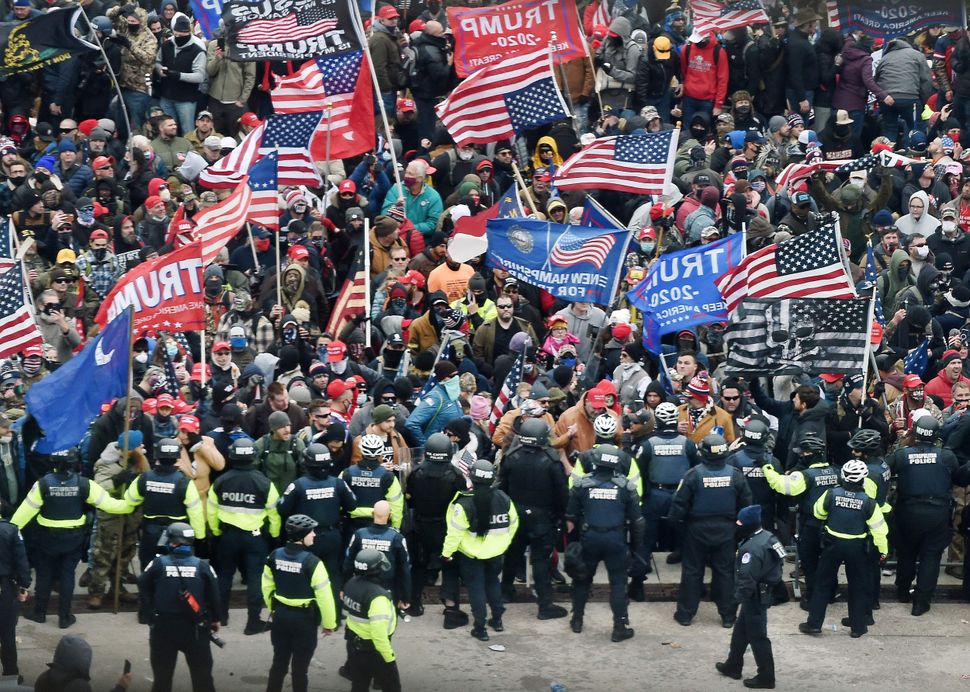 Trump supporters clash with police and security forces as they storm the U.S. Capitol in Washington, DC on January 6, 2021. By OLIVIER DOULIERY/Getty Images

For my children, Wednesday felt like any other day.

I picked my 12-year-old up from his yeshiva at the same time a mob of President Trump’s supporters was making its way through the Capitol building. Wondering whether he knew what was going on, I asked him about it. He had an idea — he’d heard about it from his teacher — but I filled in the details.

A simple question asked by a kid, but it seemed to have escaped the rioters who threw the highest-profile hissy fit this country has ever seen. Egged on by a president who just could not accept a loss, they thought they were going to get into the Capitol and set the election right.

I voted for Donald Trump. But I never signed up for this. Nobody I know who voted for him — and I know plenty of people who did — is okay with what we saw today.

Of the more than 74 million people who voted for Trump in this last election, how many of us can we say we are on board with what he and the rioters did today?

But on one thing we should all agree. Every single one of those rioters must be brought to justice. The display we saw cannot be allowed to pass without consequences for those who participated in it.

When things happen that go beyond any of the norms to which we have grown accustomed, a familiar chorus emerges. This time was no different. The chorus populated the social media feeds of pundits and elected officials. It was predictably present in the statements of Congress’s leaders as, after a harrowing day spent evacuating the Capitol and bunkering in undisclosed locations, they filed back into their chambers.

“This is not America.”

“America is better than this.”

“We will get over this.”

My first instinct is to accept all these statements — meaningless platitudes that they are — as truth. It is certainly comforting to do so. Who does not want to believe that the insane display we saw today was nothing more than an aberration — or even just a presentation of the political excesses of one side?

But at monumental times like these, while everyone tends to impulsively revert to believing what they’ve witnessed proves exactly what they thought all along, I have found that it’s best to question your priors.

So now I ask myself the following questions:

What if we are not better than this?

What if we will not get over this?

What if this is now America?

This leads to a much broader and bigger question, one I, along with many others, have been grappling with all day: What does the attack on the Capitol tell us about where we are as a country, and what does it suggest about where we are heading?

I tweeted about this, wondering less about who, specifically, instigated the riot — we can all agree that it was Trump — and more about what caused it on a macro level. Predictably, people seem to be drawing the line on that question depending on where they stand politically. So the replies were disheartening, to say the least.

But the more I think about it, the more I grow convinced that this is simply another, more disturbing, symptom of our political system’s decay. We have become so fractured that many people are simply not equipped to accept the concept of broad agreement, even when it comes to disavowing actions as extreme as rioting in the halls of Congress.

And yet. There are enough issues we could find agreement on — if we stopped mimicking how the political elites do things, and started engaging directly with people who disagree with us. We must learn to treat each other as people, again, not avatars for the political movements with which we affiliate. I have found ways to agree broadly about the problems we face, while having deep and necessarily passionate disagreements on the best ways to address them.

For many years, many if not most of our political representatives have maneuvered their way around the significant issues. All that has mattered to them is making it look as though they are working on the issues that affect ordinary people. We saw new proof of that today, as politicians across the spectrum put out meaningless statements, undoubtedly expecting congratulations for what they probably saw as their profiles in courage.

But they are the ones who created the circumstances in which the “shake-things-up” politician is the flavor of the week. If that was ever what we needed, it certainly isn’t now.

What we need is a healthier, simpler politics: one that incentivizes politicians to do what is right, and penalizes them for doing, as Trump recently has, what is clearly wrong.

I am beyond unhappy that my only option to advocate for the issues dear to me was to vote for the man most personally responsible for bringing us to this point. I am hopeful that today’s shameful episode in our national history will mean we can move on from him entirely, and find more fitting representatives for what conservativism, as I understand it, stands for.

The question my child asked — “What do they think they’ll gain by doing that?” — wasn’t about conservatism. It was about the failure of our politics, as a nation, across parties.

For the sake of all our futures, we must strive to have this be the last moment at which he can ask that question, and I can’t provide an answer.

I voted for Trump, but I didn’t sign up for this