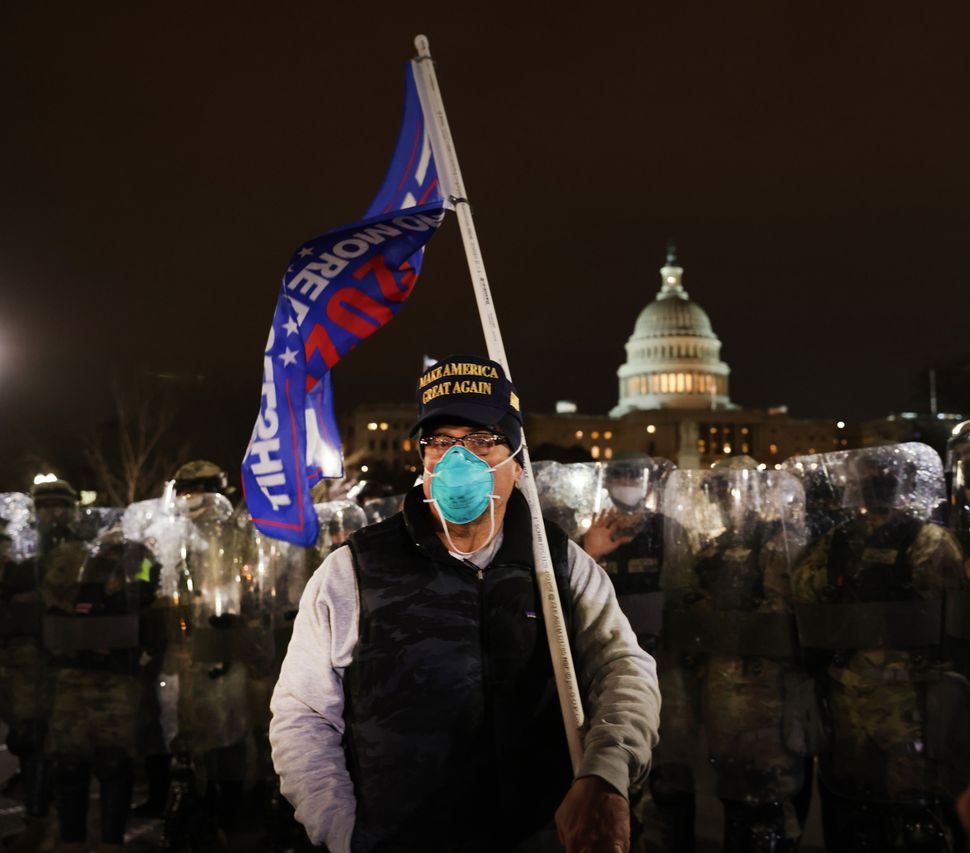 Members of the National Guard and the Washington D.C. police keep a small group of demonstrators away from the U.S. Capitol on January 06, 2021 in Washington, D.C. By Spencer Platt/Getty Images

I got a text from a liberal Jewish friend on Wednesday morning that said, “Yay democracy today!” She was thrilled at the election of a black pastor and a Jewish documentarian to the United States Senate from the Deep South state of Georgia.

But a day that dawned with such celebration will go down as the darkest day in decades for American democracy.

The stunning, unprecedented storming of the U.S. Capitol by mobs of right-wing protesters, incited by a sitting president and fueled by antisemitic conspiracies, is heartbreaking — and downright dangerous for American Jews.

I cannot say it any more clearly or powerfully than David Axelrod did on CNN.

“I am in tears today,” said Axelrod, who was born on the Lower East Side, had his Bar Mitzvah at the Brotherhood Synagogue in Manhattan, became President Obama’s top adviser and once took me and many other journalists to lunch at Manny’s Deli in Chicago.

“I am the son of an immigrant who fled a country because of scenes like this, and came to the United States because this is a country of law,” Axelrod said. “I am in tears today to see this scene, because this is not an American scene and this was not a necessary scene.”

This was a scene literally hard to believe. Like so much of the past four years, it felt like a movie whose script would have been rejected at the pitch meeting for being impossibly unrealistic.

A Confederate flag at the door of the Senate chamber. Masked supporters of President Trump jumping atop police vehicles and scaling the stone walls of the Capitol complex. Members of Congress clutching plastic bags containing gas masks. A man breaking into the office of House Speaker Nancy Pelosi and leaving on her desk a manila folder with the message, handwritten in red pen, “WE WILL NOT BACK DOWN.”

This is not the country for which Axelrod’s father, Joseph, fled the pogroms of Eastern Europe.

It is the country that President Trump has created.

Historians will debate the origins of this dark day. For me, it’s a straight line from Charlottesville in August, 2017, when Trump said of the white supremacist rally that led to the death of a counter-protester, “There are very fine people on both sides.”

I could not be a stronger proponent of listening to both sides of every argument, as I have stated repeatedly in these pages. But advocating for broad debate means knowing the boundaries of reasonable expression.

The people who chanted, “Jews will not replace us” in Charlottesville were not fine people. Rep. Mary Miller, the newly elected Illinois Republican who told the Capitol Hill crowd waving Trump flags on Wednesday that “Hitler was right” about anything does not seem like a very fine person. Nor the man in the mob that stormed inside who was wearing a “Camp Auschwitz” shirt.

I was wrong about how much damage a Trump presidency could do. When my liberal friends panicked after his election in 2016, I said I was confident our democratic institutions were strong enough to withstand whatever he might throw at them.

And when he continued contesting the election results after he so clearly lost in November, I told these same people to just ignore it as so much noise. Yes, he could still pardon people who didn’t deserve it, even launch military action on a whim. But our democracy would prevail and come Jan. 20, his era would be over.

I was wrong. Trump has unleashed a mob that does not care about democracy, and does not believe in the country that people like Joseph Axelrod built. It is going to be very, very difficult to turn it back.

In my 30 years as a working journalist, I have covered a lot of protests. Anti-abortion protests in Buffalo, New York; anti-Darwin protests in Topeka, Kansas; anti-Israel protests in the West Bank and Gaza Strip. None came close to being as scary as what I saw on CNN on Wednesday.

When I was a Washington correspondent in the late 1990s, I used to love walking by the perennial protesters outside the Capitol. I looked forward to their clever signs; I admired their commitment to their cause.

That’s our democracy on display: very fine people, on all sides, expressing their views, a stone’s throw from the halls of power — not throwing stones at those in power. That’s the democracy my text-messaging friend was celebrating. The beloved democracy we must work to restore.

Shortly after 8 p.m. on Wednesday, the Senate reconvened to certify the election of President-elect Joe Biden. Sen. Chuck Schumer of New York, the (Jewish) Majority Leader-to-be, said it was a day that would “live in infamy,” that the “protesters” were in fact “domestic terrorists” who should be fully prosecuted, and that “the president bears a great deal of the blame.”

“This temple to democracy was desecrated,” he said. “This will be a stain on our country not so easily washed away.”

Then a bunch of other Senators took their turns at the rostrum, almost as normal — another surreal scene from the movie that never would have gotten greenlit.

“Yay democracy today!” I thought. I hope I am not wrong again.