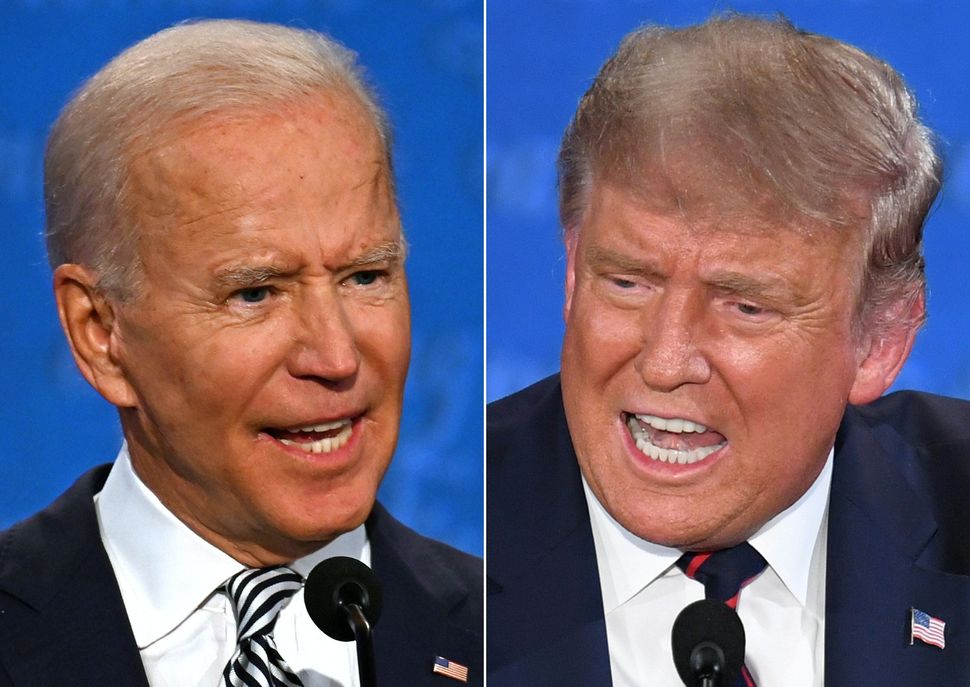 Enough name-calling. Enough demonization of the opposition. Enough defining people out of the debate.

We’ve had more than enough gloating these last few years. Gloating is easy. Empathy is hard. But empathy is Jewish: Hillel summed up the whole Torah as “what is hateful to you, do not do to your neighbor.” And empathy is what we need now.

The most important thing I heard during this campaign was also the most obvious, something I used to consider trite because every politician said it. It came at the end of the second debate, when the moderator asked President Donald Trump and former Vice President Joe Biden what they would say in their inaugural address to those who did not vote for them.

Trump punted, instead talking again about “the plague coming in from China” and saying that if he lost “your 401(k)s will go to hell.” Biden took a direct swing at this softest of softballs.

“I will say, ‘I’m an American President. I represent all of you, whether you voted for me or against me, and I’m going to make sure that you’re represented,” he said.

I know this is career-politician pablum; I’ve heard it in every modern campaign, real and fictional — Matt Santos said as much in his victory speech on “The West Wing.” But when I heard Biden say it, I was surprised at how much I’d been missing it, even yearning for it.

It has somehow become unusual for a leader to acknowledge our divisions and to put our sameness, our collective Americanness, above those divisions.

Shame on us for letting that happen — for doing it in our own families, synagogues, communities.

This election comes as coronavirus cases are climbing toward 100,000 a day; just a few days after the yahrzeit of 11 Jews murdered during Shabbat services; with unemployment soaring and the stock market plunging; with unrest in Philadelphia over yet another police killing of a Black man and mourning in France over yet another terrorist attack.

So much has been lost, and so much is at stake.

This campaign has been marked by unprecedented political polarization, by hateful, dehumanizing speech and disinformation. We have seen a spike in cancel-culture — and a rapid decline in our civil discourse.

This is not a one-sided phenomenon. It is when we at the Forward publish thoughtful, serious, heartfelt columns and articles by and about Jewish Trump supporters that I get attacked most on social media, that I get ugly comments and subscription-cancelation threats in my inbox.

As we put together a “Jewish report card” on Trump’s four years in the White House, I kept coming back to the 2017 “Unite the Right” rally in Charlottesville, Va. The rally where white supremacists chanted “You will not replace us,” an antisemitic trope, as well as the even more directly offensive “Jews will not replace us;” where a man rammed his car into a counter-protest, killing a 32-year-old woman after which President Trump said that there were “very fine people on both sides.”

But this attempt to legitimize illegitimate ideologies is not license for us to delegitimize legitimate differences of political opinions.

Most Trump supporters were not in Charlottesville, would never chant “Jews will not replace us,” are in fact very fine people, perhaps a quarter of American Jews, who may just be your neighbors. We are obligated as Jews to not do to them what is hateful to ourselves, obligated as humans to empathize with their experience, obligated as citizens in a democracy to seek to understand their policy positions.

Maybe they were buoyed by Trump’s recognition of Jerusalem as Israel’s capital, or believe his stance on religious liberty protects their way of life. Maybe they got a job or a tax cut as the economy improved, maybe they believe abortion is morally wrong.

I’m not telling you who to vote for. As a 501(c)(3) not-for-profit, the Forward does not endorse candidates, and by now you’ve surely made up your mind if not already cast a ballot.

What I’m asking is that you, too, consider what you’ll say afterward to people who voted for the other guy.

On Halloween this weekend, my 13-year-old son was with some boys who wanted to “egg” a certain house with a Trump sign on its lawn. We live in a bright blue New Jersey town that people jokingly call the People’s Republic of Montclair, so the rare Trump sign does stand out — his twin sister had wondered only a few hours earlier whether the one we drove past was a Halloween spoof.

Luckily, my son was more interested in collecting candy, so he left the boys and Trick-or-Treated his way home. I told him what Hillel said: What is hateful to you, do not do to your neighbor.

Definitely don’t throw eggs at your neighbor’s house. And if your guy wins, don’t gloat.

Jodi Rudoren is the editor-in-chief of the Forward. You can email her at [email protected]