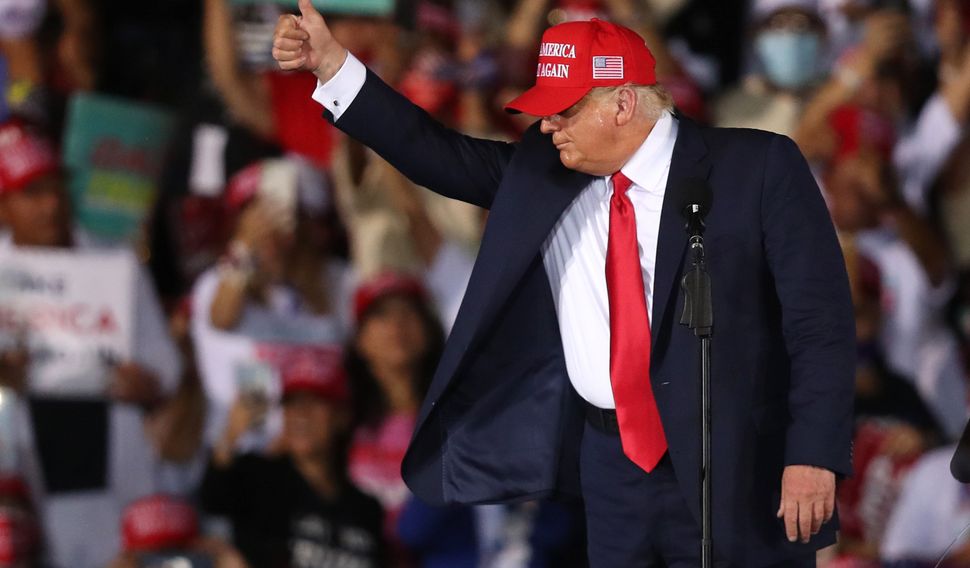 Four years ago, I couldn’t imagine voting for Donald Trump. Though my politics were always more conservative on social and fiscal issues, pulling the lever for Trump was unimaginable. While all politicians are flawed and many tend to bend the truth, Trump was unique in his blatant disregard for honesty.

So you will not be more surprised than I am to learn that on Tuesday, you will find me standing in line to vote for President Trump.

And this despite the many things that I still find unpalatable about the president. After all, he still lies quite a bit, just one facet of a deportment lacking in dignity. As an immigrant to this country, I was also horrified by his ugly rhetoric towards migrants, who are trying to enter this country to better their lives. Calling them criminals and fear-mongering about their intentions was disgusting, and played to his base’s worst instincts.

All this is to say that it would have been easy for the Democrats to earn my vote. And yet, they failed to, on a number of fronts.

The first is abortion. I never expected to align completely with a pro-choice party. But there was a time when conservatives could vote for Democrats because Democrats wanted abortions to be “safe, legal and rare.” We’re no longer in that time. The Democrats’ point of view has veered away from this and into territory that seems to celebrate abortion, taking up the view that long after a fetus is already a life, it should be up to the mother to choose whether or not to have it. As an Orthodox Jew, my views don’t align exactly with the pro-life Christian right. But the extent to which the Democrats have veered left on this issue has made it increasingly difficult for me to support them.

Then there’s the issue of religious freedom, another area where the Democrats’ position seems to me increasingly difficult to defend. Democrats have recently taken to showing their disdain for religion in an open forum. During Amy Coney Barrett’s confirmation hearings for the court of appeals, for example, Senator Dianne Feinstein famously said, “The dogma lives loudly within you.” To religious people like me, it was a startling example of the normalization of religious intolerance from Democrats.

As with abortion, this has been a developing trend. The case of Jack Phillips of the Masterpiece Cakeshop in Colorado, who refused to bake a cake for a gay couple on the grounds that it violated his religious principles, haunts many of my fellow Orthodox Jews. We see it as something that could happen to any frum baker who, upon his refusal to cater a gay wedding, could be sued and lose his business.

And numerous other examples show that this fear is sadly well-founded, and that the government is increasingly willing to step in where religious liberties used to be sacrosanct. Orthodox Jews also took note of the the case of the Little Sisters of the Poor, an order of Catholic nuns sued by the Department of Justice because they declined to provide contraceptives.

And while the Obama Administration insisted that the Affordable Care Act included a mandate on employers to provide insurance coverage for contraception, the Trump administration has done the opposite, issuing a ruling that allows health workers to refuse to perform procedures that violate their conscience or religion.

But the alienation Orthodox Jews have felt from Democratic government isn’t just at the national level. It’s at the local level, too. Our conflicts with Mayor de Blasio and Governor Cuomo since the coronavirus’ onset have been well documented. But even before that, we have had to struggle with the state, which has attempted to dictate mandatory quotas of time dedicated to secular studies even in private religious schools. These hours of secular study demanded by state officials are so excessive that they would render our school’s ability to teach religious subjects basically impossible, as we see it. And while these regulations have been struck down by a judge it is only a temporary victory.

But this brings me to another point: Increasingly, Orthodox Jews have looked to the Supreme Court as the last protector of religious liberties. And on that front, President Trump has undeniably been a friend, appointing justices who view the world more the way we do. Meanwhile, it’s no secret that should the Democrats win the presidency along with a majority in the Senate, they would consider packing the Supreme Court.

But when I think honestly about why I changed my mind about President Trump, the reason that really clinched it for me was the Abraham Accords. This peace agreement between Israel and the United Arab Emirates and Bahrain, organized by the Trump administration, was not just a step forward for Israel; it was a huge step forward for Jews worldwide. After all, Middle Eastern countries have a history of not just anti-Zionism but outright Jew hatred. The rates of antisemitism in the Middle East are some of the highest in the world. Under Trump’s guidance, some of these same countries entered into an agreement with the world’s only Jewish state, and entered it freely, and unconditionally.

The normalization of the ties between Israel and these countries humanized Jews. And it did so without precondition. This is a huge win for Jews worldwide, even more than it is a geopolitical negotiation.

Certainly, one can disagree on all these issues. But what I’m trying to explain is why a conservative like me used to feel he could vote for a Democrat, and no longer does.