I live among evangelicals, and admired them. Now I think a reckoning is due. 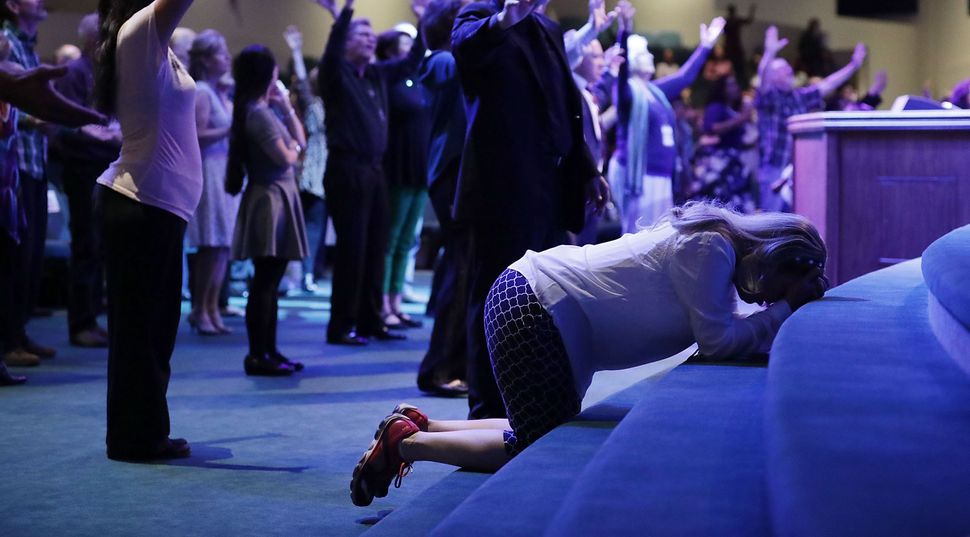 Worshippers pray during a service at the International Church of Las Vegas before the arrival of Republican presidential nominee Donald Trump October 30, 2016 in Las Vegas, Nevada. Courtesy of Chip Somodevilla/Getty Images

As a Jew, it’s arguably not my place to either lecture white evangelical Christians or attempt to explain them to the world. But few secular American journalists have written on the subject as deeply as I have for the past 35 years.

I have lived among evangelicals, and raised my family in their company. For decades, I have defended these good people.

Still, I have read the recent polls and studied the data. And I’ve reviewed a spate of new books which have portrayed white evangelicals in a largely negative light, by scholars who have documented the entrenched and widespread racism, anti-Muslim and anti-immigrant prejudice and anti-LGBTQ hostility informing white evangelicalism. These forces go a long way, I think, in explaining many conservative Christians’ deep and seemingly blind infatuation with Donald Trump.

I have long weighed and balanced this depiction against my own contrary, anecdotal experience living among white evangelicals, which has ranged from positive to inspirational. I now understand that to some extent I may have let my sympathies skew my sample. Sadly, reluctantly and painfully, I have now had to modify my views.

When I started on the religion beat, the evangelicals I wrote about made largely perfunctory efforts to convert me to Christianity, an endeavor that, I came to understand, they saw as their New Testament obligation. But over time they grew to respect my Jewish faith, and they never failed to profess their undying and unreserved love for Israel. I found much to admire in my subjects, despite our fundamental theological, political and cultural differences.

The evangelicals I know are middle class, suburban, college educated and corporate. They are neither untethered from reality, nor uniquely susceptible to fabulist conspiracy theories. They are not mask-averse COVID deniers and skeptics. And they are not, in my experience, racist. Some, with sadness, view many evangelical Trump followers as lemmings.

But I realize that while they may not have stormed the Capitol, in the privacy of the voting booth too many of my genteel friends and neighbors were still willing to barter their faith for what Trump had to offer, in the form of anti-abortion Supreme Court justices and an American embassy in Jerusalem. In the process, they have forfeited any right to use the “the character issue” criticism in electoral contests for the foreseeable future — although they will certainly still try.

Despite the entrenched, grassroots racism at the base of the white evangelical movement, it remains too simplistic to credit all evangelicals’ support of Trump to that bias. Franklin Graham, perhaps the most prominent evangelical in the country, is an exception: His intolerant attacks on Muslims and Hindus are inextricably linked to his unquestioning defense of Trump. But beyond him, the story becomes more complicated.

For all her other sins, televangelist Paula White, one of Trump’s favorite evangelical proxies, ministers to a predominately Black mega-church. And while leaders of major denominations like the Southern Baptist Convention have been disgracefully tardy in atoning for their support for slavery, Jim Crow and segregation, their record on contemporary issues of race is less one-note than popular portrayals might have you believe.

In 2008, white evangelical leaders initially joined Latino and African American evangelicals in supporting President Bush’s compassionate, bipartisan immigration reform. In a sign of a rift between the rank-and-file and leadership to come, they were yanked back by nativist factions in their base.

But some maverick anti-racist leaders like the SBC’s Russell Moore have made a courageous start in speaking out on their more moderate beliefs. Others have taken their own actions for change, like former mega-church pastor Joel Hunter, organized “Pro-Life Evangelicals for Biden,”. Swimming against the existing evangelical tide continues to come at a considerable cost. As The New York Times’ David Brooks wrote, when the conservative preacher Jeremiah Johnson apologized for his support of Trump after the riot at the Capitol, he received death threats and was labeled a traitor to his faith.

Like the post-Trump Republican Party, evangelicals may be facing an internal civil war. In both the Gospels of Matthew (3:12) and Luke (3:17), John the Baptist preaches that there comes a time when the valuable wheat needs to be winnowed from the useless chaff, preserving the former and burning the latter. For white evangelicals to rejoin the American mainstream, they need to undertake some hard talks as a community, addressing their racist roots and accounting for the wreckage wrought by Trump, often with their support.

That work needs to start in pulpits, even at the risk of alienating some of the people in the pews. In this Jew’s view, these leaders need to drum into their congregations that one cannot be a faithful evangelical Christian and also believe in white supremacy and other forms of intolerance. That message must shape the evangelical future, for the health of the country and that of the movement itself: Younger white evangelicals tell pollsters that they are increasingly attracted to more moderate views on issues like climate change, income inequality and LGBTQ rights.

Of course, reconciliation is a two-way street. For white evangelicals to renounce Trump and intolerance may not be enough for many in the secular Democratic base. For them, nothing short of a full-throated apology from white evangelicals for throwing their weight around in the public arena in support of causes incompatible with real faith will suffice as a step towards unity.

My decades of reporting in the evangelical community have left me with some hope that it may as a whole change for the better in the future, maybe even sooner than we think. But a true apology for the Faustian deal so many evangelical individuals made over the last four years? For many, I think, that will require a reckoning too strenuous to bear.

Orlando-based journalist and author Mark I. Pinsky has covered evangelical Christianity since 1985 for the Los Angeles Times, the Orlando Sentinel, the BBC and Religion News Service, as well as for the Forward. He is the author of “A Jew Among the Evangelicals: A Guide for The Perplexed.”

I live among evangelicals, and admired them. Now I think a reckoning is due.