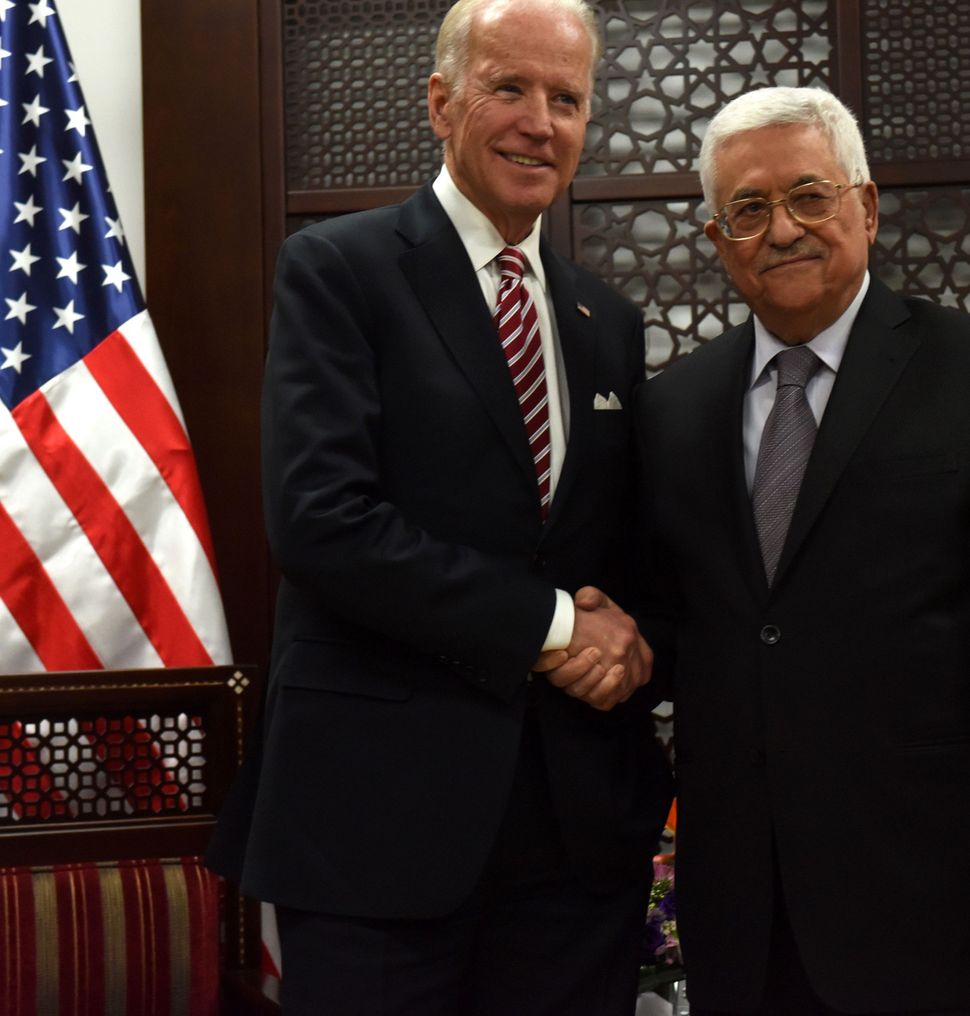 Joe Biden and Mahmoud Abbas shake hands following a meeting at the presidential compound in the city of Ramallah, in the West Bank, on March 9, 2016. By DEBBIE HILL/Getty Images

As President Joe Biden was sworn into office last week, the octogenarian President of the Palestinian Authority, Mahmoud Abbas, hastened to issue a warm congratulatory statement, emphasizing his readiness for “a comprehensive and just peace process.”

He sent a similar but more detailed letter to Biden’s team in November, offering to make several concessions in hopes of returning to negotiations: to“stop incitement” in Palestinian school curriculums; to change the system for financially supporting the families of Palestinians imprisoned, killed or wounded by the Israeli military; and promising not to continue unilateral moves toward statehood by joining more international organizations and treaties.

As a sign of good faith, Abbas also resumed relations with Israel, including security collaboration, after halting them in May to protest Israel’s consideration of annexing the occupied West Bank. He then officially requested a phone call with Biden, a request that’s yet to be fulfilled, though Biden had such calls with Israel’s Prime Minister Benjamin Netanyahu and the king of Jordan shortly after his election.

It is dismaying to see Abbas abruptly enact this reformist agenda overnight. The Palestinian Authority seems to have no broader strategy; its leaders don’t know what they’re doing or where they were going with decisions like halting relations with Israel — or restoring them.

They are, instead, too hopeful that the Biden Administration holds a magic wand to Palestinian emancipation. Palestinian officials have been vocally confident that Biden can simply rewind the clock to a pre-Trump time, in which U.S. funding to the Palestinian Authority and the United Nations Relief and Works Agency, which supports Palestinian refugees, are restored, and the Palestine Liberation Organization’s office in Washington, D.C. as well as the United States Consulate in East Jerusalem are reopened.

This falls into a familiar pattern of Abbas’ government endlessly waiting time and again for a messiah to do its work and set the Palestinians free, while willfully ignoring three crucial facts.

First, the path to restoring the pre-Trump status quo is not a clear, linear one. Reopening the U.S. Consulate, for instance, would require the approval of Israel’s government as well as the United States Congress, a tough if not impossible path. Similarly, the Taylor Force Act — a law President Trump signed in 2018 that makes Palestinian aid contingent on the cessation of payments to families of Palestinians accused of terrorism — stands in the way of resuming funding to the Palestinian Authority.

Second, the pre-Trump status quo was inherently unsustainable to begin with. It was during Obama’s presidency that Gaza lived through two brutal wars, in 2012 and 2014. That left many Palestinians living in despair, which Abbas has said helped ignite a spike in violent attacks in 2015-2016, causing senseless deaths and tragedies for both peoples.

Wiping out Trump’s imprints on the conflict and restoring funding and diplomatic ties would fall critically short of meeting the minimum of Palestinian needs and aspirations at a moment of severe depletion of hope and human capital. Restoring the inherently destabilizing status quo ante is akin to covering up the smoke of an imminent volcanic eruption and praying that it won’t blow.

Finally, Abbas’s government is knowingly neglecting the fact that Biden’s administration will not have the time, will or capacity to push for progress towards solving the Israel-Palestinian conflict. It may nominally indulge the peace-process industrial complex — sponsor bilateral talks and photo-ops; talk about the importance of the two-state solution; constrain the growth of settlements; maybe send some economic aid to the West Bank and Gaza. But with a raging pandemic, racial protests, climate change and other pressing problems, Biden is not going to risk much political capital for us.

In his Senate confirmation hearing last week, Anthony Blinken, Biden’s pick for Secretary of State, made clear that Biden’s future role in the conflict will be limited. While throwing his support behind the two-state solution, Blinken said that “realistically, it’s hard to see near-term prospects for moving forward on that,” adding:“What would be important is to make sure that neither party takes steps that make the already difficult process even more challenging.”

This has been the exact same position of the European Union for decades; to sit in the audience seat and pull some strings to make sure the two-state solution lives, while taking no serious meaningful steps to advance it. Like Abbas, Biden’s administration seems to be planning on waiting idly for a miracle to happen to end the conflict. Perhaps they hope that the leftist Meretz Party will somehow come from near extinction to win Israel’s premiership and relegate Netanyahu to mere history.

But if the new American leadership has given up hope of signing a historic peace agreement on the White House lawn, we, the two peoples entrapped in a terminal conflict, can certainly not afford this indefinite state of limbo.

With every day the conflict remains unsolved, a spirit is broken, a life is lost, a permanent disability is created and thousands upon thousands of us wither in despair and fear of the unseen other. In Gaza, every second is unbearably painful for a young, highly-educated yet unemployable generation, some of whom have reached 35 without starting a career or a family.

While far from perfect, Biden’s presidency will differ markedly from Trump’s. His policies toward Palestinians won’t be arbitrary, punitive or vindictive, and he will not embrace everything Israel’s right-wing government does without question. We can hope that his term may at least provide a favorable, stress-free atmosphere of tranquility that leads to progress, but only if Palestinians and Israelis turn to one another rather than waiting on the U.S. to be the adult in the room.

One way, moving forward, is to touch on the untapped potential of people-to-people peace-making. For instance, recently the Israeli billionaire Mikhael Mirilashvili donated two atmospheric water generators to Gaza, a moving and significant gesture that even Hamas could not criticize. In fact, it led one Hamas leader to say “it’s all right to cooperate with Israel in humanitarian matters that affect the life of Gazans.”

There is reason to hope if we look inwards, rather than thousands of miles away to D.C., for salvation. The key is to see each other as human and acknowledge that if we don’t take the first move, no one else will. For our own sake, it’s about time that we step up and come forward to each other’s support, to set both of ourselves free from the shackles of this conflict.