Biden has taken the first steps on reproductive justice. Jews must push him further. 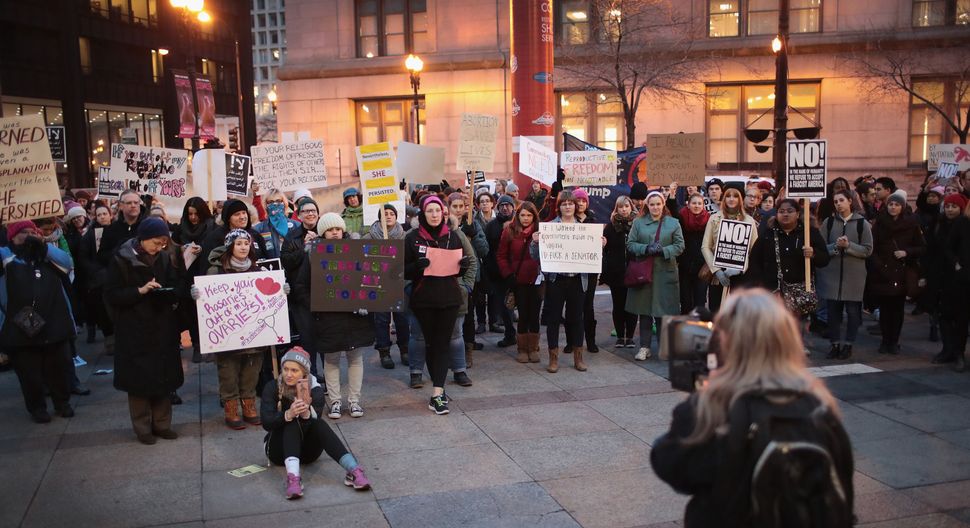 Demonstrators protest in front of the Thompson Center to voice their support for Planned Parenthood and reproductive rights on February 10, 2017 in Chicago, Illinois. By Scott Olson/Getty Images

On Thursday, the Biden administration took action to expand access to reproductive health care, including abortion. These steps include rescinding the global gag rule and restoring federal funding to organizations abroad that provide abortion services or do related work, and directing the Department of Health and Human Services to review Title X, the first step in restoring federal funding for services around family planning and sexual health to those struggling to make ends meet.

We celebrate these actions, but there is so much more work to be done.

As Jews, we know that each human is created in the divine image. Kavod habriyot, or upholding human dignity, and pikuach nefesh, preserving life — including and especially that of a pregnant person — are cornerstones of our tradition. We are taught to pursue justice, to empower and protect those most marginalized in society. This is all related to the work of reproductive health, rights and justice.

These critical principles are empty platitudes if they are not applied with intention to the world in which we live today.

For the past 128 years, the National Council of Jewish Women has been working to create a world in which everyone, no matter their income, race, gender identity, location or sexual orientation, has the right to live their lives with dignity, including the right to build their families as they choose. Jewish tradition, informed by our shared values of dignity, freedom and preventing suffering, views abortion as essential health care. Our Judaism inspires us to keep doing this work, day after day, year after year.

We also follow the lead of the Reproductive Justice Movement, founded in 1994 by Black women, which now includes organizations like SisterSong, SisterReach, In Our Own Voice and the National Latina Institute for Reproductive Justice. This movement highlights an obvious but all-too-often forgotten truth: Abortion isn’t a choice you can make if it’s legal but infeasible.

The Reproductive Justice Movement is also about the right to decide whether and on what terms to have children, and to be able to raise those children in safety — with, for example, access to clean water, and free from police brutality and the school-to-prison pipeline. As an organization composed primarily of white women — and as two white women, ourselves — we work diligently in the attempt to be worthy allies of the Reproductive Justice Movement and productive partners in our work towards shared liberation.

As Yael Benvenuto Ladin, an Oberlin Student involved in planning a Repro Shabbat — a forthcoming nationwide NCJW event examining the deep connections between the Jewish perspective and the work for Reproductive Justice — explains:

One of the ideas that Judaism and Reproductive Justice have in common is the communal mindset, a perspective that embraces and requires us to think about the benefits and responsibilities we have as members of communities. Our health, our prosperity, our justice, are all measured and attained collectively. Judaism prioritizes health and community, centers sustainability, and describes the great work of our lives as tikkun olam, repairing the world. What better way to build the world we want and deserve to live in than starting with the health, justice, and sustainability of our own communities?

Alongside our partners, we now call on President Biden to make good on the promises inherent in his new actions on Reproductive Justice by publicly reinforcing his support for Congress to end the Hyde Amendment, which prohibits Medicaid funding for abortion services. This is particularly significant, as discriminatory public policy has created systemic and economic barriers that mean 30% of Black women and 24% of Latina women ages 15 to 44 are currently enrolled in Medicaid, compared to 14% of white women.

As long as the Hyde Amendment remains, these women will continue to have reduced access to abortion. The fight for Reproductive Justice is inextricable from the fight for racial and economic justice. As Jews, taught to pursue justice as one of the core tenets of our faith, we know it is our fight.

Sheila Katz is the CEO of the National Council of Jewish Women, an organization at the frontlines of the fight for reproductive health, rights and justice for over 125 years.

Rabbi Danya Ruttenberg is a scholar in residence at the National Council of Jewish Women and the author of “Surprised by God,” “Nurture the Wow” and other books.

Biden has taken the first steps on reproductive justice. Jews must push him further.