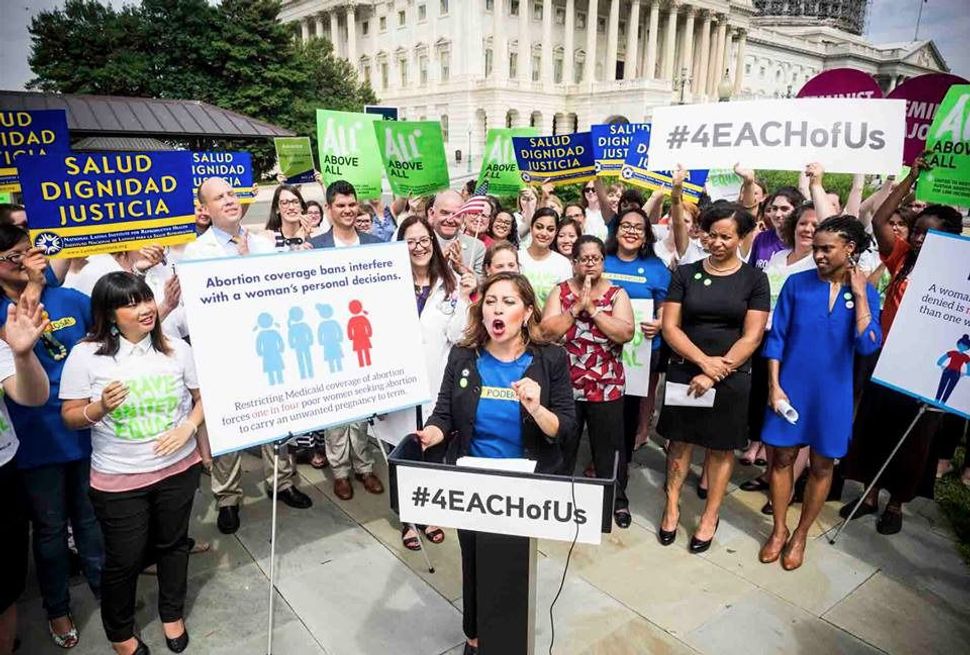 Image by All Above All

When the shofar blows this Rosh Hashanah, which moments will flash before my eyes? As my stomach churns on Yom Kippur, for what will I ask forgiveness? As women across the country continue to face an onslaught of anti-choice rhetoric and restrictions, my role in the struggle for reproductive justice will be heavy on my mind.

Earlier this year, I began work at the National Council of Jewish Women just as we were launching a . In my quest to learn more, I attended a Trust Black Women event examining how black women have resisted reproductive oppression in the United States. Panelists spoke of slavery, rape, and sterilization. One woman spoke of being descended from sharecroppers. I remember fighting back tears; it was hard to bear witness to such violence, and confront so starkly my own privilege.

I have come to believe that Jewish history demands my solidarity with the reproductive justice movement.

As a Jewish woman in my early twenties, I was raised with the knowledge of past atrocities done to my people, including violent reproductive oppression. The Nazis targeted Jewish women, along with Roma women and other “undesirables,” for sterilization. In the ghettos and concentration camps, pregnant Jewish women were forced to submit to forced abortions or be sent to the gas chambers. I am grateful for the wellbeing of my body, knowing what could have been.

Less often discussed is the fact that the United States also engaged in coercive sterilization, targeting black, Puerto Rican, and Native American women, as well as women with disabilities. And today, women of color, immigrant women, and young women bear the brunt of anti-abortion restrictions like the Hyde Amendment, a federal ban on abortion coverage that forces seeking abortions to carry an unwanted pregnancy to term. On Yom Kippur, many congregations will read the Leviticus passage that commands, lo ta’amod al dam re’echa, do not stand idly by the blood of your neighbor. The blood of my history cries out to me; am I to remain silent?

Anti-choice rhetoric and legislation is also a form of deep religious oppression. When politicians maintain support of the Hyde Amendment, they impose one religious belief — about conception, abortion, and sexuality — on all of us. This violates the religious liberty of every individual and family affected. I grew up hearing stories of religious persecution, heeding the call to remain vigilant. Unfortunately, in the United States today, when it comes to intimate matters of our own bodies, religious liberty is a privilege. Am I to remain silent?

While carrying the memory of my communal history, I also acknowledge my relative privilege as a white-skinned, upper middle class, straight, cis-gender, able-bodied, citizen woman living in the United States. My private health insurance plan covers abortion and covered the IUD that protects me against unintended pregnancy. As the queer black feminist and poet Audre Lorde once said, “What woman is so enamored of her own oppression that she cannot see her heelprint upon another woman’s face?” The reproductive justice movement offers a powerful path to understand how racism and other forms of oppression deny reproductive freedom, and an approach to combat these forces in our efforts to build a better world. As a woman of privilege, am I to remain silent?

Over the past year, I have seen many in the Jewish community engage questions of race with courage. Have Ashkenazi Jews taken on whiteness? How has the establishment Jewish community marginalized Jews of color, and what can be done? What is the Jewish role in the struggle for racial justice? In our journey to responsible social justice activism, we must add reproductive justice to the agenda.

As I pray in synagogue during the High Holidays, I’ll be thinking of the activists across the country mobilizing around the Equal Access to Abortion Coverage in Health Insurance (EACH Woman) Act. This bold new federal bill would lift the Hyde Amendment and bar other attempts by politicians to deny abortion access to a woman just because she is poor. This is what reproductive justice could look like, encoded into law.

I’ll also be looking inward. I’ll remember the women on the Trust Black Women panel and examine my role in their oppression. I’ll wonder at the resilience of the Jewish women around me and mourn what it has meant for our bodies to be disposable. And I’ll look forward to the coming year, ready for the complexity of what it means to be a Jewish feminist in solidarity with the reproductive justice movement today.

Leanne Gale is the Grassroots Associate at the National Council of Jewish Women.