In the last decade, Max Berger has had his hands in some of the most prominent and disruptive left-wing campaigns, ranging from IfNotNow, Occupy Wall Street and Justice Democrats — a group that supports primary challengers to centrist Democrats — to Elizabeth Warren’s 2020 presidential campaign.

Berger, 35, whose activism is rooted in his opposition to human rights abuses in Israel, shared that perhaps his first foray into activism was in his early teens: On the advice of his rabbi, he donated some of his Bar Mitzvah money to Palestinians displaced by the occupation of the West Bank.

As Israel faces its fourth general election in two years, and the Biden administration gains steam in addressing international issues, I spoke with Berger for his perspective on what the future of left-wing Jewish organizing might look like. The following conversation has been edited for length and clarity.

Tell me about your Jewish upbringing.

My political identity was shaped by the kind of mainstream liberal Jewish Reform tradition I was raised with. More than anything else, the notion that it can happen here was the foundation of identity formation. And what it meant to be a Jew was to have a sense of belonging with others who are experiencing the kind of oppression that we faced, and to recognize that what otherwise would appear to be a normal functional democratic society could at some point collapse and the people who are your neighbors, could someday become become monsters or become part of something monstrous.

Tell me about the first time you went to Israel and what you learned from that experience.

My first time going to Israel was on Birthright. And it sounds naive, but I was genuinely interested in learning about the Israeli-Palestinian conflict. And honestly it’s one of these interesting counterfactuals where if there was a more intellectually honest and politically open space to have those conversations, I might not have reacted the way I did.

My Birthright trip was super radicalizing. I think there were a lot of things that happened on my trip that don’t happen on a normal trip. The original leader got kicked off the trip and was replaced by someone who was pro-settler, carried a Glock and told us about the dangers of “Arab ideology.” One of our nighttime activities was a bootcamp, in which they had us pretend to be soldiers at a mock checkpoint. The Israeli soldier guides showed us this initiation ritual where they punched pins into the chests of those that completed the “boot camp.” It was insane.

What struck me was the extent to which the basic questions I was asking on Birthright were not treated as answerable, but rather as if the act of asking the question was wrong. I walked away thinking that these answers cannot be good, because if you think that I’m doing something wrong by earnestly trying to understand the situation, then you are hiding something egregious and horrible.

I also had friends from college studying in the occupied territories and I visited them. And I think that if you spend any amount of time in the territories there is no way you can leave that and think that there is any set of circumstances that could justify the way people are living there.

You keep saying “our” and “we” in reference to Israel. Could you expand on why you do that?

On Birthright there’s this event hosted by MTV Israel personalities, and they have high-ranking government officials come and speak. Everyone there is waving the flag of their home nation and Israel. And the message is that this is your home too, this is your homeland whether or not you knew that.

If you’re trying to tell me that justification for the state is that one day, I too, may need to leave the country that I was born in and seek refuge in another land, then I have some right to say what happens there. The realization was that even if I wanted to, I could no longer avoid or ignore Israel. And then I came back home, and finished up college. It was right around when J-Street started. And I wanted to get involved.

Tell me more about your experience with J-Street.

J-Street’s job was to make sure that the American Jewish community is not the reason why the American government would be forgiving of Israel’s misdeeds. We were going to give Obama the space that he needed to do what needed to be done, and not let our community get in the way. And I honestly don’t think that’s a bad idea. It was a good hypothesis. But I think that there’s many reasons why it didn’t prove to be entirely accurate.

On my very first day at J-Street, I was introduced to their take on the problem: a triangle. There’s the land, there’s democracy, and there’s a majority Jewish state. Israel can only be two of those things. So what do you want it to be?

It can be Jewish and have all of the land, but that’s not a democracy.

It can be democratic and keep the land, but that’s not necessarily Jewish.

You can be Jewish, and democratic, but you can’t have all the land.

I still think that’s basically the right frame for the problem.

J-Street thought that American Jews, and probably Jewish Israelis, would sacrifice the whole land for the sake of a Jewish democratic state. I remember thinking back in 2008… well, what if that’s wrong? What happens if Israelis say instead we want the land and to be Jewish, and don’t care about democracy?

And the response was basically “let’s hope we never have to confront that.” I think a lot of liberal Zionism is just repeating that line ad nauseum.

But I think that’s where we are now. And the jump from J-Street to IfNotNow is recognizing that it’s time to choose. We cannot forestal this decision any longer. Do you care more about there being a Jewish majority state or about people of this region having equal rights and democracy?

That’s part of the reason we didn’t advocate one-state, two state, BDS, whatever… there are a million white papers, there are countless well-thought-out solutions, so that’s not really the problem. The real question is do we actually want to solve this.

What’s your perspective on BDS?

I wish the BDS movement would do a better job of articulating a vision of what they want to ultimately happen that includes Jews. I recognize that there are people in the BDS coalition for whom success means removing Jews from the land. And to many Jews that feels like an existential threat.

By the same token, if you think about anti-apartheid and anti-colonial struggles in the past, boycott and solidarity tactics are the only things that have worked. There’s no question that BDS has the right approach. That doesn’t mean that they’re doing it flawlessly, or that I don’t have my own concerns or biases as a Jew.

When Representative Ilhan Omar, two years ago, made a comment that American support for Israel is “all about the Benjamins,” you criticized her comments, saying they were “too close to classic tropes about secret Jewish power for comfort.” And you argued that “we need to be honest about instances of anti-Semitism [sic] on the left, even when they’re unintentional.” Can you tell me more about how you see antisemitism in American politics today?

There’s not a segment of society that is exempt of antisemitism. There is antisemitism on the left.

But this is where it gets tricky: bad-faith weaponization of antisemitism exists. And most of the time these accusations are in bad faith. It’s a difficult task to be like, this is mostly bullshit, but we will still care about antisemitism.

When Ilhan, who was a hero of mine for a long time, said those things, my big point was that she needed to be careful. Bad faith accusations were going to be hurled at her no matter what and I didn’t want her to unnecessarily open herself up to these attacks.

I almost can’t put into words the disappointment and just deep and bitter sadness I feel that communal Jewish institutions have spent so much time figuring out how to diminish the power of people like Congresswomen Rashida Talib and Ilhan Omar, and barely called out the Trump administration for increasingly overt fascism. And they have treated Rashida and Ilhan as threats equal to fascism. It’s misguided, dangerous and, I think, a pretty tremendous moral failure.

In addition to being a founder of IfNotNow, you were also involved in what came to be known as Justice Democrats. What do you hope the future has in store for these groups?

I think one of the nuances always lost about organizing is that the individuals or organizations themselves need not become the dominant player.

Do I expect that Biden and future administrations will be calling in IfNotNow to ask what they think? No. But I do think that who they call in is going to sound a lot more like IfNotNow than in the past.

How do you approach the issue of calling more Zionist friends into these conversations?

I think there’s an opportunity to have a conversation about the ways in which Trump was like Netanyahu. So many American Jews that want to be anti-racist when it comes to the question of American politics, and hate Trump with the passion of a million suns, only find Netanyahu distasteful. The crisis of ethno-nationalism and the shift away from democracy in Israel is similar to what’s happening with white people in the United States. When you’re at risk of losing your default majoritarian status in power you actually have to take much stricter measures, you have to be more active in defending it. Israelis move towards Jewish political supremacy, like Trump supporters move to white nationalism. I know most people wouldn’t love that analogy.

That is the beauty and the curse of being a contemporary American Jew. In our recent historical memory we can understand what it means to be oppressed and to be an oppressor. I think we need to challenge people and give them an opportunity to see themselves as part of the the struggle for Palestinian Liberation.

Why I Refuse To Go On Birthright — And You Should, Too.

Zachariah Sippy is an intern at the Forward. He can be reached on Twitter or by email. 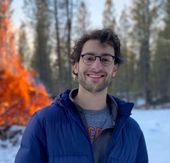 ‘My Birthright trip was super radicalizing:’ A conversation with IfNotNow co-founder Max Berger