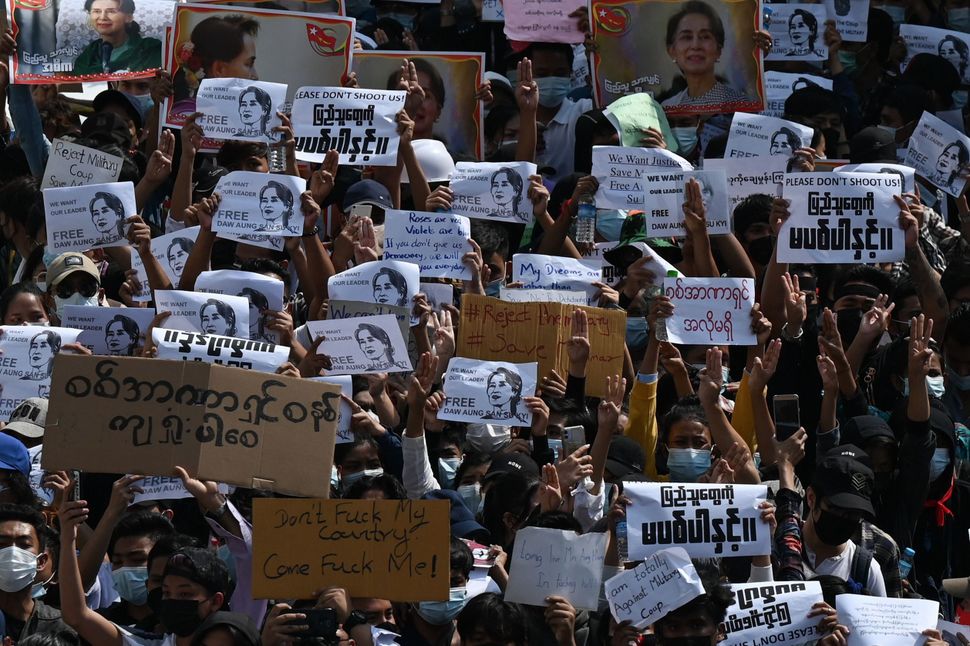 Protesters in Myanmar hold placards during a demonstration against the February 1 military coup, in downtown in Yangon on February 8, 2021 By YE AUNG THU/Getty Images

The military coup in Myanmar on Sunday was shocking but hardly surprising. After generals seized a democratically-elected leader and troops cut off telecommunications, we must ask: How can we protect Myanmar’s most vulnerable, who are already suffering a genocide?

The Myanmar military, known as the Tatmadaw, seized power following a decade-long experiment in democracy. Although the country had made legitimate strides toward civilian rule, the Rohingya, an ethnic Muslim group living primarily on the country’s western edge, continued to suffer in myriad ways. Since 2016, the military, backed by local Buddhists, has murdered thousands of civilians, raped and abused Rohingya women and girls, and burned hundreds of towns in Rakhine State, where most Rohingya are based.

The welfare of the Rohingya, who even before the genocide had been persecuted for years, must be our focus amid this coup.

Perhaps the most alarming facet of the military takeover is the man who orchestrated it: General Min Aung Hlaing, alleged to be the primary architect of the genocidal atrocities against the Rohingya.

In the last few years, Myanmar’s democratically elected leaders — as well as Aung San Suu Kyi, who was barred from elected office but has served since 2015 as Myanmar’s de facto leader — stood idly by as more than 700,000 Rohingya fled in fear of their lives to neighboring Bangladesh, their birth certificates and vital documents destroyed by the military on their exit. In 2018, Suu Kyi had a chance to speak out for the Rohingya, but instead stood in front of a podium on the international stage at the United Nations and defended the military’s actions. Her inaction, and that of the party that supported her, must continue to be condemned.

But the situation for the Rohingya only stands to worsen following this latest military action. A leader who refuses to interfere in a genocide is, ultimately, different from one who actively engineers it.

Today, nearly one million Rohingya live in sprawling, overcrowded camps without proper access to medical supplies, clean water and education. Most of those one million are women and children whose husbands and fathers were murdered by the Tatmadaw in Myanmar.

Their desire someday to have a safe and dignified return home has now likely been dashed. They have already had their rights stripped through a constitutional loophole that has denied them citizenship and the right to vote. Many Rohingya children are reportedly subjected to forced labor. There is every reason to expect that under Hlaing’s leadership, these conditions will further deteriorate.

American Jews must stand with the people of Myanmar, especially the Rohingya, and demand that the United States and other international leaders apply sanctions that will pressure the military to relinquish power.

President Biden’s administration has already called the Myanmar military’s actions a coup. This essential first step imposes restrictions on foreign assistance — but that is not enough. We must also call on Secretary of State Antony Blinken immediately to issue a determination of genocide for the atrocities that are being perpetrated against the Rohingya. This step will allow the U.S. to levy more significant sanctions, ones with the potential to force the Tatmadaw’s hand. Jewish World Watch, the organization I head, has already taken steps toward these lengths: You can sign our letter to Secretary Blinken to make your voice heard.

Our Jewish tradition and values, and our own experiences of persecution, require us to stand up and take action whenever and wherever people are suffering. We know all too well that silence is lethal. When corrupt regimes aren’t held to account, they become emboldened, putting vulnerable populations at risk. We who hold high the value of human dignity and a life free from violence at the hands of the state must act with urgency.

Silence doomed more than six million Jews during the Holocaust. It was silence that led to Darfur Genocide. We cannot let silence write the same story of the Rohingya.

Serena Oberstein is the Executive Director of Jewish World Watch, an anti-genocide organization rooted in Jewish experiences of persecution, tradition and values founded in 2004, when the silence about the genocide in Darfur was deafening.