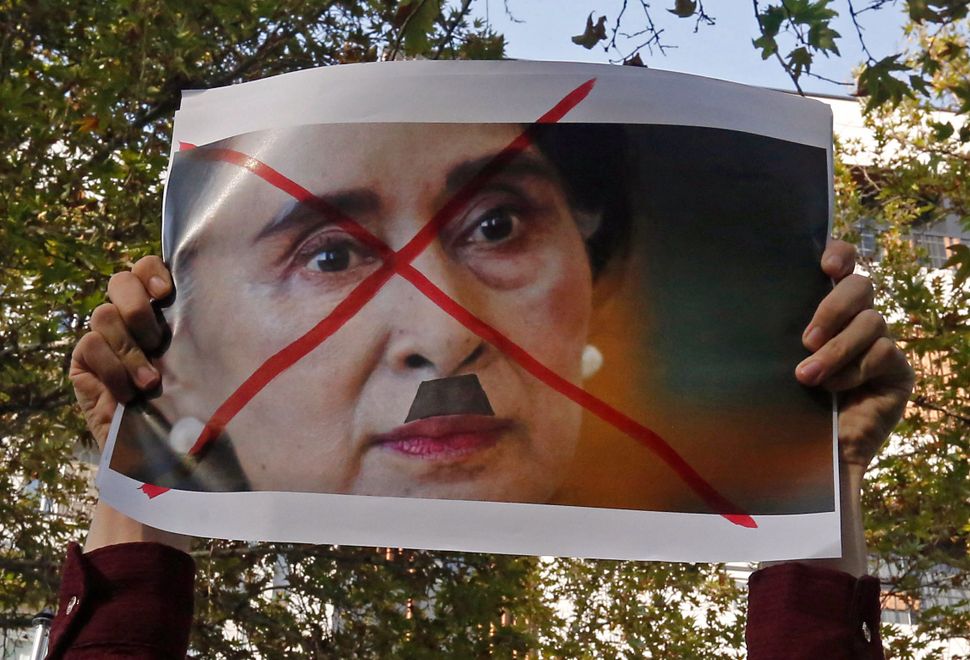 A protester holds up a sign during a march against Aun San Suu Kyi in Iran in September 2017. Image by Getty

Aung San Suu Kyi, the political leader of Myanmar, was once the darling of world governments and organizations focused on global humanitarian efforts. In 1991 she won the Nobel Peace Prize for using non-violent means to try and move Myanmar to a democratic country from military rule. The military junta held her under house arrest for 15 years for her efforts.

But Aung San Suu Kyi has received tremendous criticism from Western institutions in recent months for refusing to cooperate with United Nations investigators trying to ascertain the extent of Myanmar’s state-sponsored killings and expulsion of the Rohingya.

“We had hoped that you — as someone we and many others have celebrated for your commitment to human dignity and universal human rights — would have done something to condemn and stop the military’s brutal campaign and to express solidarity with the targeted Rohingya population,” the museum wrote in a letter addressed to the Myanmar leader at their Washington, D.C., embassy. Aung San Suu Kyi was given the museum’s award in 2012. In November of last year, the museum released a report that alleged that Myanmar was committing a “genocide” against the Rohingya.

Aung San Suu Kyi has reportedly refused to say the word “Rohingya” in public appearances, and private talk of the “ethnic cleansing,” as the U.S. has called it, makes her angry.

Aung San Suu Kyi has well over 100 other awards and honorary degrees and citizenships that have not been revoked.