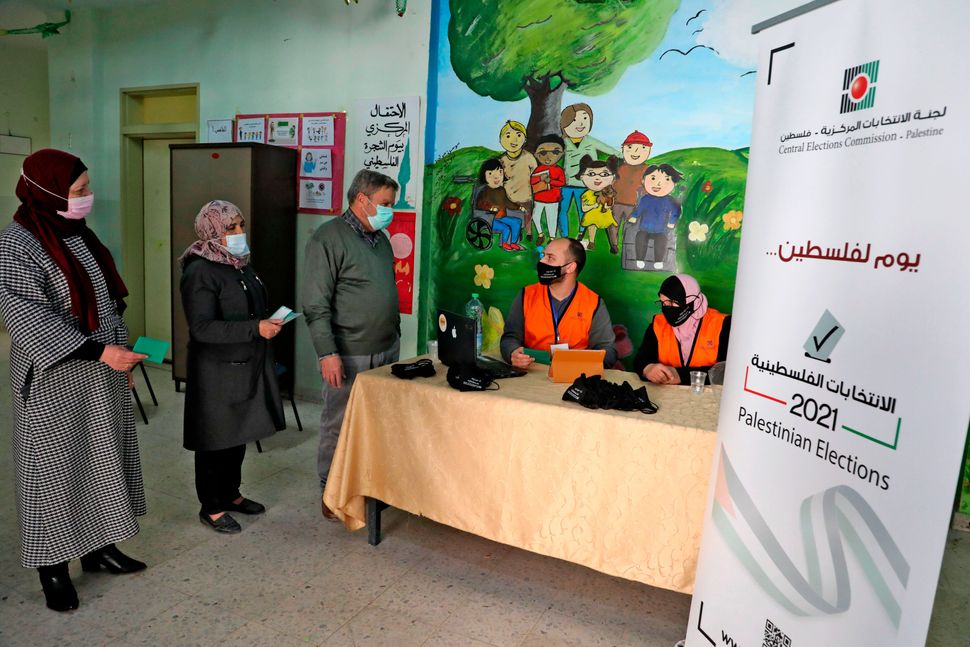 The American Israel Public Affairs Committee has called on the U.S. and the international community in recent weeeks to push against the participation of an “unreformed Hamas” in the upcoming Palestinian elections.

AIPAC argues that Hamas, an Islamist group that the State Department counts as terrorist, should not be allowed to participate in the balloting starting in May across the West Bank, Gaza Strip and East Jerusalem unless it signs onto certain principles of the peace process. But that position is mired in an outdated vision of Middle Eastern peace.

Hamas must commit to the Quartet Principles (U.S., EU, U.N., Russia) to be legitimate electoral participants.

They require that the Palestinians meet a minimum standard:

These principles were outlined by the so-called Quartet — the United Nations, the European Union, the United States and Russia — that was charged in the early 2000s with facilitating peace negotiations between Israel and the Palestinians. AIPAC seems to be making no attempt to understand the unique political circumstances of the Palestinian territories, or the gains to be made by casting off that too-long dominant perspective.

I, like most young and marginalized Gazans, believe Hamas’ de facto rule over Gaza has been authoritarian and corrupt. Many of us have fervently hoped that Hamas would simply disappear from government. But if control over Gaza is ever to be returned to the Palestinian Authority (P.A.), dialogue between Hamas and the rulers of the P.A. is the only realistic way forward.

The P.A. has no army to oust Hamas leaders, and Israeli Prime Minister Benjamin Netanyahu has made clear that he’s not interested in uprooting them. To do so would be to open the door for Gaza to join the West Bank under the leadership of Palestinian President Mahmoud Abbas, a strengthening of the Palestinian position that Netanyahu and his allies would rather avoid.

Countless attempts at intra-Palestinian reconciliation have so far proved futile. The only way that stalled dialogue can currently move forward is through general elections across the Palestinian territories to produce one indisputably legitimate and representative government.

After enormous pressure from Turkey, Qatar, Egypt and others, Hamas has finally agreed to that path. That agreement is the first step toward a new age in Palestinian leadership and government. And it’s why AIPAC’s campaign to undermine it is so dangerous.

The Palestinian electoral system was recently changed to one of proportional representation, like Israel’s, to protect against either Hamas or Fatah — the party of Abbas — being able to form a government on its own. The new system makes coalition building and intra-Palestinian negotiations all but inevitable.

A senior Hamas leader recently told me that its internal polls forecast the party winning 25% to 30% of the total vote. This means that Hamas must be expected to participate in the next Palestinian government in some shape or form. Ignoring that reality works counter to the prospect of peace, and AIPAC’s campaign risks doing serious harm to the process of free and fair Palestinian elections. Their delegitimization of Hamas’ candidacy and prospective electoral gains would impede the formation of a unity government that both Palestinian sides would respect.

These elections, the first national balloting since 2006, are the most significant in a generation for us Palestinians. They are crucial to the future of Israel, too.

Last Friday, Hamas’ deputy head, Mousa Abu Marzouq, said that in any future Palestinian government, Hamas would not aim to fill the seats of prime minister or foreign minister, but would rather nominate or endorse internationally accepted figures.

Abu Marzouq also said that Hamas would not fill its seats in the government with known senior leaders, but would choose technocrats distant from the movement’s center.

That’s good news for everyone. The less involved Hamas leadership is in government, the more room there is to move forward with the government’s negotiations with Israel, and to spark a sea change in the political culture in which Palestinians like myself grow up.

Ahmed Yousef, the face of the more moderate current in Hamas, told me that if the next Palestinian unity government accepts some or most of the Quartet principles, Hamas would approve that motion provided it would lead to improvements in the lives of Palestinians. (The Quartet Principles apply to the elected Palestinian government and not any one party, however, they’ve been used expansively in the US to demand compliance from Hamas as a party.) He said these could include a formal endorsement of the two-state solution, an endorsement of non-violence; and honoring past diplomatic agreements.

The only one of the Quartet principles that remains a bright line for Hamas is the demand for the Palestinian government to explicitly and unilaterally recognize Israel. Maintaining non-recognition of Israel is how Hamas distinguishes itself from Fatah, and has historically been how Hamas claims moral and ideological superiority — and hence dominance — over other armed groups in Gaza.

But Yousef said Hamas might, if needed, even tacitly accept the recognition of Israel by the next Palestinian government — a concession the magnitude of which cannot be overstated.

And it’s not the only concession Hamas is prepared to make. If a Palestinian unity government is successfully formed through elections and embraced by the international community, party leaders have promised they would hand that government near total control over Gaza, including security, border control, policing and taxation. Yousef told me that under a unified government, Hamas would even be willing to suspend its armed resistance, although not actually give up its weapons.

A path towards gradual disarmament of Hamas’ militant wing and integration of its troops into the Palestinian security sector could then be part of a global solution to the conflict with Israel. Hamas’s Internal Security Unit — which regularly arrests activists, dissidents, and collaborators with Israel — remains a sensitive and unresolved issue.

These potential steps by Hamas, though, require reciprocity, as well as incentives and rewards from both Israel and the international community. If they are not met with progressive rewards, or even go unnoticed or provoke a punitive boycott of the new Palestinian government similar to what happened in 2006 after Hamas’s victory in the last elections, Hamas’ positions would relapse to square zero. That outcome would invite a resurgence of hardliners within the movement.

Thus, AIPAC’s argument that Hamas must immediately and unilaterally recognize Israel’s legitimacy and renounce its armed resistance tactics in order to participate in the elections is the antithesis of what’s needed for change and progress. The movement’s prospective participation in the political process is the only way toward gradual change, moderation and sustainable de-escalation in Gaza.

The alternative is not the elimination of Hamas, but the sustaining of the status quo, which would perpetuate the despair and suffering of Palestinians. In that environment, only radicalization can thrive.

Muhammad Shehada is a contributing columnist at the Forward. Follow him on Twitter @muhammadshehad2, or email [email protected]