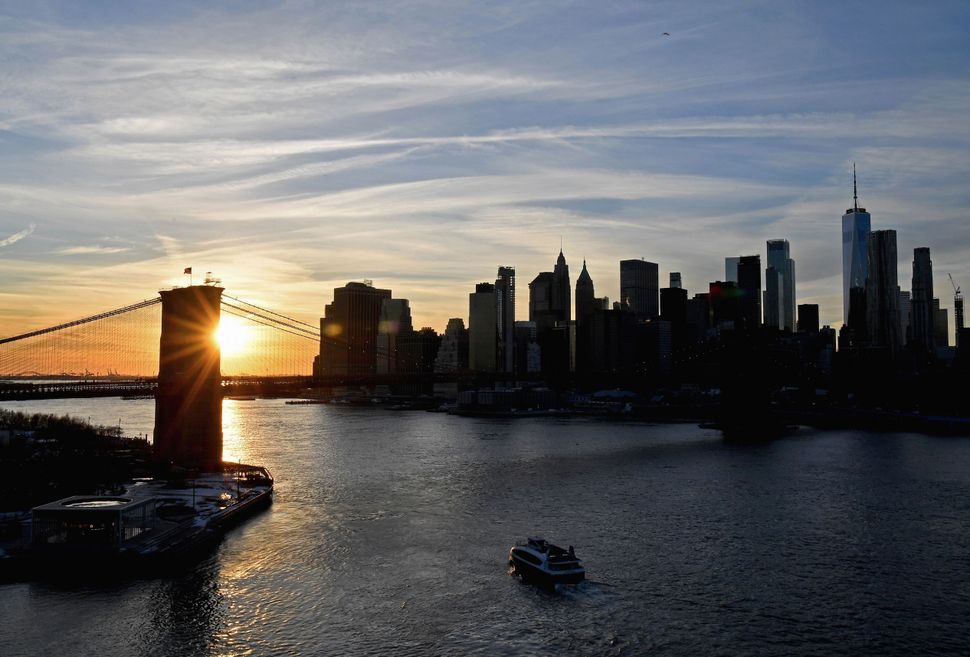 The Manhattan skyline in February, 2021. By Angela Weiss/Getty Images

More than 30 people are running to be the next mayor of New York City, including a former Democratic presidential hopeful, several candidates with years of service in city government, and more than a few unknown longshots. Trying to follow the race, especially as it debuts a new experiment in ranked-choice voting, can be dizzying even for veteran New York political hands like myself.

But it’s a race that all American Jews should care about — New York is, in its population and in its soul, a Jewish city we all have a stake in. 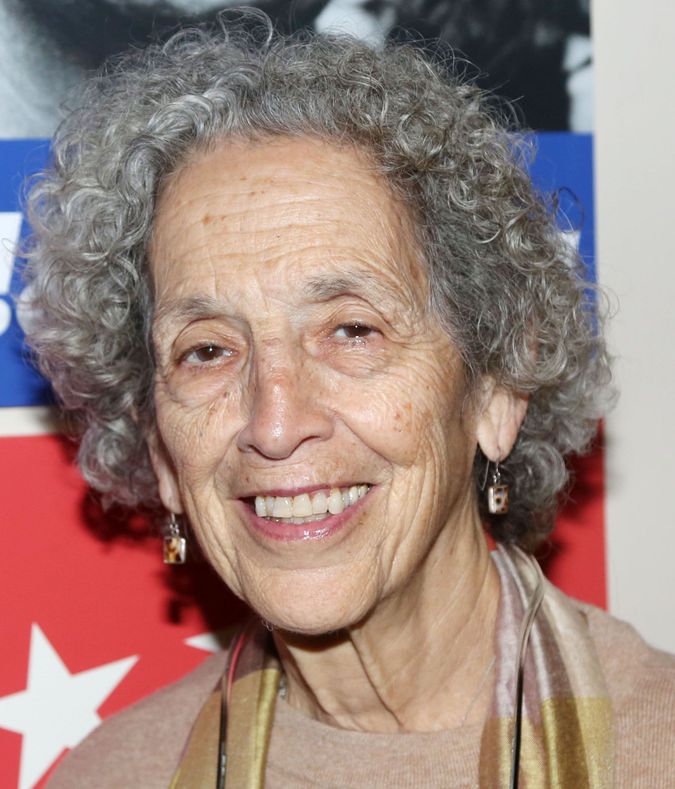 I’ve spent my whole life in New York, save for two years in Oklahoma — but that’s another (good) story. I first ran for public office in 1975, and spent decades on my local school board, the City Council and as Manhattan borough president before losing a hard-fought race for mayor against one Rudy Giuliani in 1997. So of course I’m immersed in the current campaign — I know many of the candidates, and next month I will be co-hosting a mayoral forum with Jodi Rudoren, editor of the Forward, as part of my work with the Marlene Myerson JCC Manhattan.

But you don’t have to have my background — you don’t even have to live in New York — to care what happens in this race. New York is the most Jewish city in the world outside of Israel. Since 23 Jewish refugees from Recife, Brazil, were brought here quite unceremoniously in 1654, New York’s Jewish population has swelled to some 1.1 million, including every type and stripe of Jew.

The city is also home to many of the best-known national Jewish organizations, several Jewish museums, public parks and pools named after Jews, world-famous Jewish restaurants and delis, and annual arguments about the best bagels. New York iis a place where the Korean counterman in your local coffee shop will, when you order said bagel, ask if you want a schmear.

It is a place that too often encounters antisemitic attacks against both buildings and people — and one where Jews and non-Jews alike stand up forcefully against these attacks.

New York has had visible Jewish leaders for many decades: prominent rabbis, organizational spokespeople and elected officials. For decades, the machers of the city’s dominant Democratic Party ran tickets for the three citywide positions made up of a Jew, an Italian and an Irish-American (all men, it’s worth noting); only more recently has there been an expanded sensitivity to include the many other ethnic and racial groups that are part of our melting pot.

Abe Beame was the first Jewish mayor of New York, elected in 1973. Ed Koch was arguably our most Jewish mayor, serving from 1978 to 1989, and serving up plenty of shtick when the moment called for it. Michael Bloomberg was our most recent Jewish mayor, from 2002 to 2013. One of this year’s leading candidates, Comptroller Scott Stringer, is Jewish. 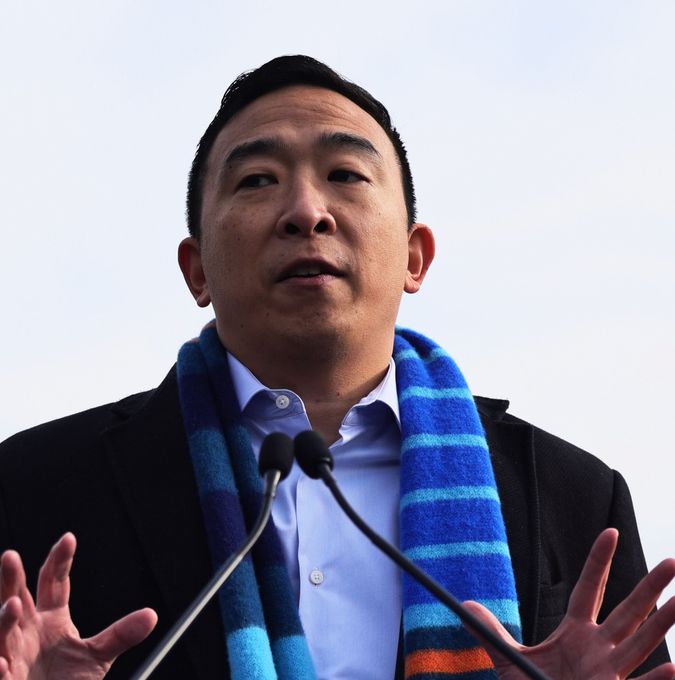 But, as other candidates like Andrew Yang have already shown in this campaign, city leaders are expected to speak out on issues of Jewish concern regardless of their individual faith or background. There is a Jewish sensibility to the city and what matters and happens here is often of interest to engaged American Jews who want to see how the city lives this sensibility, how it responds to challenges and how it promotes diversity.

I know this because in the 20-plus years since I left city government, as I have spoken at innumerable synagogues and conferences about my work at American Jewish World Service, I am regularly asked about The Jewish City — its weather, its people, its neighborhoods and its politics. Amid discussions about genocide in Burma or child marriage in India, someone would inevitably ask if I could just say a word or two about what is happening in New York at the moment or about running against Rudy — a popular topic, particularly in the Trump era — or about what the city is doing about the homeless.

It sometimes feels as if every American Jew once lived in New York, or knows that their grandmother did — and wants to express either some regret or some delight that though they themselves are not officially part of the city, they still maintain an acute interest as to how it is doing. They want me to know the neighborhood where they — or their grandmother — once lived, and get a targeted update on how that neighborhood is faring.

People in and outside of New York are fascinated by stories of its changing neighborhoods, places where observant Jews live in close proximity to other groups, how it works and when it doesn’t. People love visiting the Harlem churches that were once synagogues, with Magen David icons carved in their exterior stonework next to signs announcing Sunday worship.

New York, of course, is also America’s urban icon, dealing over decades and on a massive scale with affordable housing, sustainable environments, public education and policing — sometimes well and sometimes not so well. These issues matter fiercely to New York, but they matter many other places, too — perhaps especially to American Jews concerned about equity and social justice.

People in other jurisdictions, people who are engaged on these issues in their own communities, want to see how New York confronts them, want to see if there are some approaches or solutions from New York that might be tried where they are. What our next mayor does to respond to the wave of post- pandemic economic problems, what he or she does to improve emergency-response systems, will be watched and sometimes copied or adapted by leaders in other cities.

Similarly, people are fascinated to see New York candidates — Jewish and non-Jewish — take positions on religious/secular conflicts, on race relations, on antisemitism and, quite often, on Israel and the Middle East, issues that cross any municipal boundaries and connect American Jews to one another.

For political obsessives, this particular New York municipal election is also important because we are experimenting with a new system of ranked-choice voting that could have huge implications for how multi-candidate fields can be managed anywhere.

Previously, in New York and many other jurisdictions, if no candidate won more than 50% in the primaries, there would be a runoff between the top two vote-getters — a runoff that inevitably drew low turnout, cost a lot of money, and further polarized the electorate. ; supporters of the other candidates lost interest, turnout was almost always way down, the runoff cost was significant and the electorate was further polarized. Now, after a voter-approved change to the city charter, New Yorkers will have the option of listing up to five choices in ranked order in the June 22 primaries.

If no candidate is the first choice on more than 50% of the ballots cast, the candidate with the fewest first-choice votes will be cut, and those who put that person first will have their votes redistributed to their second choice. This process continues until one of the candidates passes 50%, avoiding the need for a runoff. (Because New York is such a heavily Democratic city, the winner of the Democratic primary will be the favorite in November.) This could lead to significant election reforms for other cities and states.

Jews in Miami and Los Angeles, Jews in Charleston and Portland, Jews in Georgia and Colorado, all care about the state of New York Jewry. They want to know who is running for mayor, what the candidates’ connections are to our communities, and where they stand on these critical urban, national and, yes, Jewish issues. Even if you — and your grandmother — have never lived in New York, or even visited, these elections should matter to you.

Ruth Messinger, former Manhattan borough president, is global ambassador for American Jewish World Service and the social justice activist-in-residence at the Marlene Myerson JCC Manhattan. Sign up here to join her and Jodi Rudoren, the Forward’s editor-in-chief, for a forum with the top New York mayoral candidates on March 10.