Purim celebrates a thwarted genocide. Honor its message, and commit to aiding the Uyghurs. 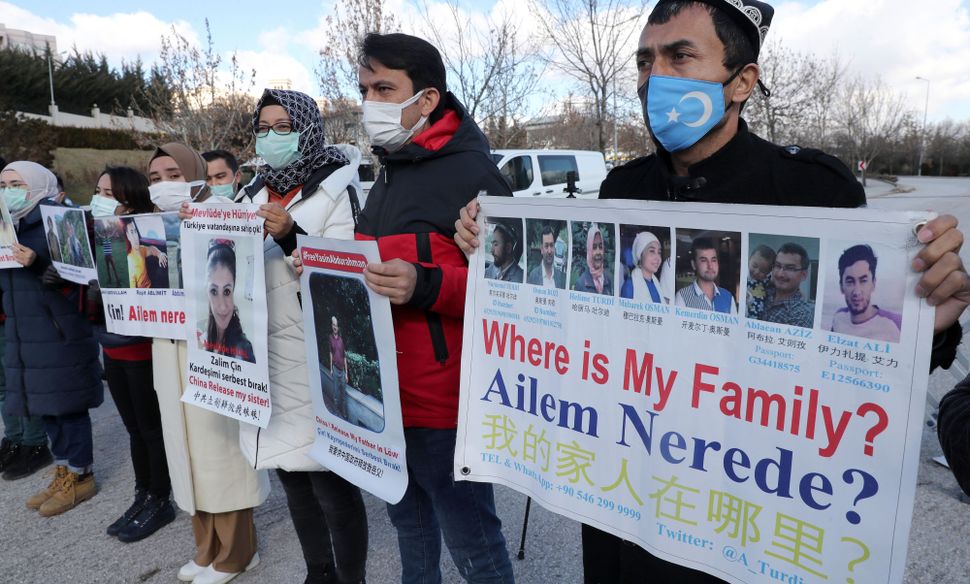 Uyghurs living in Turkey demonstrate for the release of their relatives detained in China on February 5, 2021 in front of the Chinese Embassy in Ankara. By ADEM ALTAN/Getty Images

A few years ago, I told the story of Purim to a second-grade Sunday school class in a sleepy Rhode Island suburb.

My students found the opening scenes to be thrilling and exotic, as the goofy Achashverosh expelled Queen Vashti and the beautiful Esther won his heart.

Then suddenly, evil Haman called for the Jews’ destruction and Achashverosh confirmed the genocidal decree. My students’ jaws dropped in horror. “All the Jews? Killed?”

During this year’s Zoom megillah readings, I encourage us all to pause at this terrifying moment to recognize, like my students did, that escape from Haman’s decree is not assured.

Raphael Lemkin, the Holocaust refugee who coined the term “genocide,” once wrote of Jewish history that “A line, from blood, led from the Roman arena through the gallows of France to the pogrom of Bialystok.” This Purim, we must remember the terrifying facts of genocide that have followed us through our history — and act to help those subject to that terror today.

For years, Uyghurs, Kazakhs and other Muslim minorities in the northwestern Chinese province of Xinxiang have been subject to a prolonged campaign of physical and cultural genocide. Hundreds of thousands of Uyghurs have been imprisoned in concentration camps, where reports indicate they suffer slave labor, political indoctrination, torture and forced sterilizations, among other brutalities.

Even outside the camps, Uyghurs face a consistent cultural assault. Islamic names, education, and prayer are forbidden. High-tech surveillance systems monitor Uyghurs for any deviance from state-sponsored Han culture and complete political loyalty to the Chinese Communist Party.

The aims of China’s ruling class are clear: they seek to replace Uyghur culture with a monolithic Han identity.

Purim teaches us that Haman hated Jews not merely because we were Jews, but because as Jews we were different from the dominant culture; all the other peoples bowed at Haman’s feet. Mordechai alone asserted that Jews could be equal yet unique Persian citizens, who didn’t allow rituals of royal allegiance to trump their moral values.

As we witness the ongoing genocide against the Uyghurs and other Muslim minorities in China, we must go beyond recognizing parallels with our own history. The examples set by Purim’s heroes, Mordechai and Esther, must inspire present action.

When Mordechai learns of Haman’s decree, he does not lament in private. Rather, he loudly cries “throughout the city” until he reaches “the palace gate.” By protesting at the literal threshold of state power, Mordechai demands justice in the most public fashion. So too must we bring our protests against the Uyghur genocide directly to our government, businesses and cultural leaders.

We must lobby our elected officials to condemn genocide, impose consequences on Beijing, and aid Uyghur refugees. Students should hold educational events and speak widely and publicly to raise awareness. Teachers should remind young Jewish leaders that Holocaust remembrance is not just a subject for the history books, but a call to action. And we must demand that President Biden expedite Uyghur asylum claims, withhold American diplomats from attending the 2022 Beijing Winter Olympics, and call on Congress to pass the Uyghur Forced Labor Prevention Act. This law would prohibit the importation of goods produced using Uyghur slave labor and sanction individuals and companies responsible for Xinxiang human rights abuses.

The Megillah tells us that when Esther learns of Haman’s plans, she doesn’t take refuge in assimilation or silence. Rather, she reveals her Judaism and begs Achashverosh to save her people.

Esther’s lesson remains relevant today. We should refuse to hide in safety and instead choose to utilize our privilege to take action. This Purim, let us not remember Jewish destruction merely for our own sake, but in recognition that for the Uyghurs, genocide is not yet a memory.

Zach Harris is a junior at Brown studying Political Science. Jonah Kaye assisted with writing this piece. The Jewish Movement for Uyghur Freedom (JMUF), a international and multi-denominational Jewish movement seeking to organize Jewish communities around the world to take action against the Chinese government’s ongoing genocide of the Uyghur and other Turkic peoples in the Xinxiang region.

Purim celebrates a thwarted genocide. Honor its message, and commit to aiding the Uyghurs.