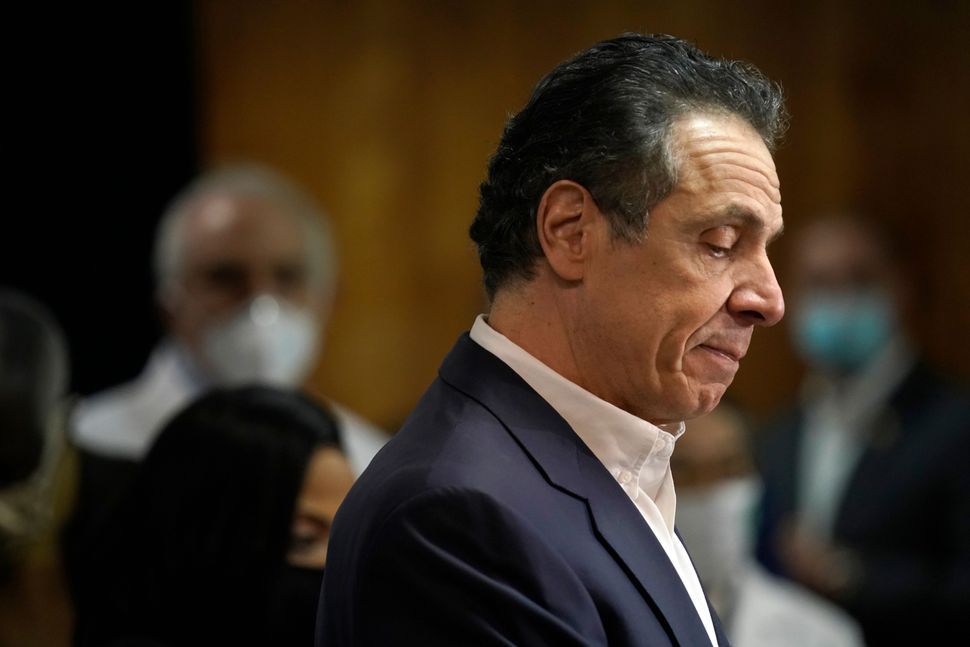 When the city was laid low and he was riding high, Andrew Cuomo’s daily press conferences were essential viewing. Their style was somehow both low-res and hi-def, the janky PowerPoints and abandoned recreation room setting making us feel as if we were all in the same absurdist bunker.

Sure, he didn’t have the same charisma as his father, longtime New York governor Mario Cuomo. But he had his own power: that of a man meeting his moment. Like FDR with his wartime addresses, the worse things got in New York last, the more indispensable Cuomo’s gruff truth-telling seemed. He was perhaps our most notable COVID celebrity.

The governor is buffeted by scandals from two ends of the age spectrum. His sins against the elderly include moving COVID-positive patients back into nursing homes from hospitals, then lying about the macabre death totals that ensued from that policy, a course of action that his administration also pursued a version of in relation to the developmentally disabled.

Even as the governor penned a book on his leadership during the pandemic, his administration was actively covering up evidence that decisions made from the governor’s mansion had resulted in a horrifying death toll for some of the state’s most vulnerable residents. The sheer audacity of downplaying those numbers made it feel like those New Yorkers were being erased and forgotten for a second time.

To constituents and nationwide observers, just as shocking were allegations that Cuomo had mistreated female aids and staffers. A number of young women have come forward to accuse him of a range of harassing behaviors, from intrusive questioning and inappropriate flirtation to attempted kissing and groping. The collective portrait they paint is of a toxic mix of power and entitlement combined in a state executive branch profoundly uninterested in boundaries.

Not every accusation alleges what might be considered a crime. But together, they credibly underline that things in Albany have gone amiss.

Cuomo insists he will hold on, and his grip on power is so tight that it looks like he just might, despite an investigation into his conduct under the state attorney general, fellow Democrats abandoning him in droves and bipartisan calls for impeachment. He has asserted that he is the victim of “cancel culture,” a phrase that refers to the illiberal impulse to silence the speech of those seen to have violated cultural and political taboos. His grasping for a bugaboo of the right in trying to fight for his political life has the feel of demagogic desperation to it.

No one quite knows how the scandals will play out, but what seems certain is that Cuomo’s aspirations for higher office, like those of his father before him, will go unmet. (And yes, criminal charges remain a possibility.)

While the chaos around Cuomo shares much in common with a whole host of other political scandals — powerful men trying to bury their political failures and abusing their office for sex — every political downfall is unhappy in its own way. Cuomo’s story will always be inextricable from that of COVID, and historians will be studying his rise and fall against this biological backdrop for years to come.

It wasn’t so much that New York handled COVID well — the nursing home disaster, among other missteps, gives the lie to that narrative. But Cuomo tapped into a sense of grittiness New Yorkers, especially those in New York City, tend to see as a part of their patrimony. Mayor Bill de Blasio, tall and goofy and somehow alienating to almost everyone, could never quite hit that note, but Cuomo had it down. And the particular fact that he was a Democratic governor in a blue state at a time when the federal government veered between incompetence and hostility made it feel like New Yorkers had a prizefighter on their hands to go up against the other outer-borough pugilist sitting in the White House.

As something like COVID’s end comes into view, what do we do with Cuomo?

The easy thing, I think, would be to write off the man behind the press conference, to toss him aside as a betrayer of trust and a fraud.

But the truer approach would be to live with the composite picture of Cuomo, one that highlights that our politicians can be both leaders and brutes, and that moments of crisis make us more susceptible than ever to the illusions that confuse the two.

Partisanship makes this worse, blinding us in one eye: we like to only see the corruptions and shortcomings of the other side, never our own.

This year of COVID has left us with few simple narratives. But it is fair to say that in ways large and small Cuomo failed to rise to the occasion during one of New York’s darkest hours. He did not listen to his better angels, and emerges diminished rather than enlarged from this time of testing.

The real question, one that will be judged in part by our reaction to his wrongs: Have we?